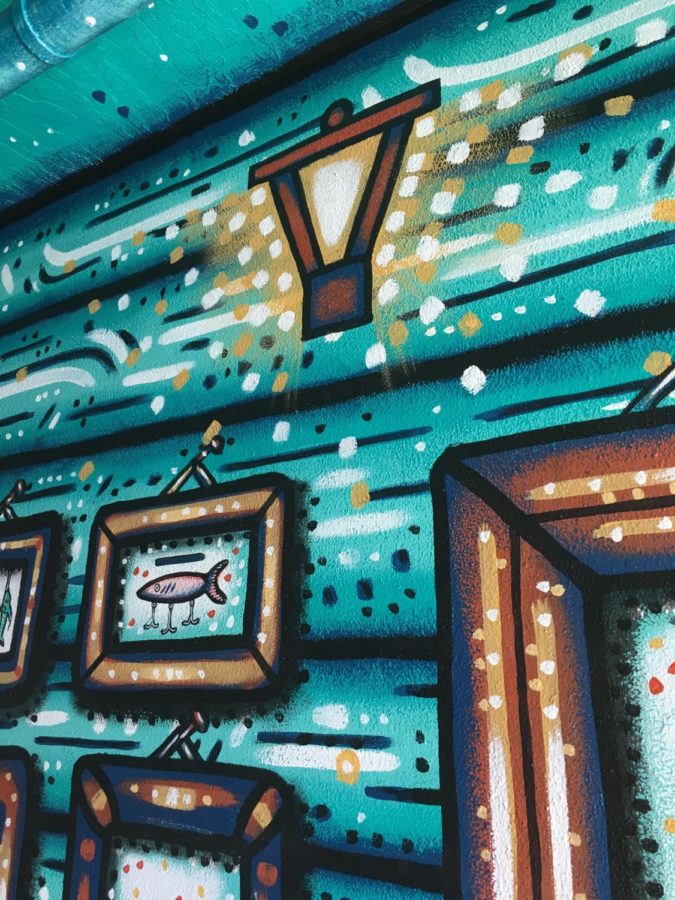 Artwork inspired by the Hispanic culture often contains a unique vibrancy about them. A muralist who goes by the name of Sick Fisher incorporates the vivid decorations of the culture into his own works of art while pulling in his own surrealistic style into the picture.

Fisher pulls everyday items and people from the world and paints bright images of them. His style is extremely spirited, with his palette consisting mainly of the primary and secondary colors. Fisher often uses these colors as a base for his murals, then stipples tints of those colors onto the foundation. This creates depth in the image while vitalizing the image that he is known for.

Fisher’s works appear high in contrast, another element of Hispanic artwork. For his mural in Sebastian, Florida, Fisher painted an illusion of wood paneling in a teal color with painted red and orange frames that simulate photos and works of art.

The artist travels all around the United States and leaves his mark on buildings left and right. In Sebastian, Fisher painted a building that was used as a restaurant and excursion joint. Fisher painted all down the hallways, sweeping the gray concrete walls away with a new coat of his foreign style.

Business owners and individuals everywhere hire Fisher to paint their buildings and houses. Fisher has painted a variety of places, from shoe stores and clubs to houses and patios. From the Pacific coast to the Atlantic coast, Fisher has painted over 30 buildings in the past five years. It takes an average of two months for Fisher to finish one of his fanciful works. The time pays off as millions of the population stop and stare at the sight of his mesmerizing works of art.