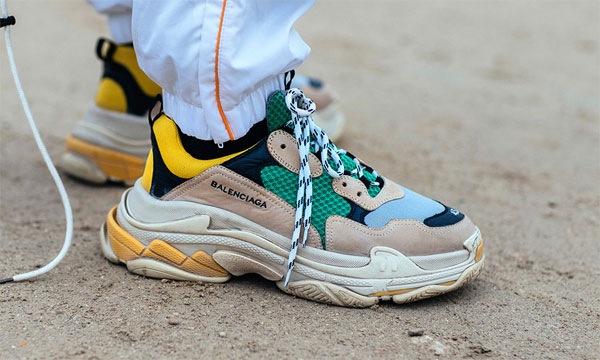 Each year, fashion follows a pattern of finding its new trends from the lower income class of American culture and society. 2017 was no exception: Gucci used the bedazzling method to style their logo on their Gucci shoes–a trend that originated from the low-cost fashion brand Juicy Couture. Off-White charged consumers more to “street beat” their shoes, hand distressing their sneakers to replicate shoes that have already been worn in, skated, ran in, etc.. However, the biggest trend of the fashion year has to go to the introduction of bulky sneakers in the high fashion community.

Bulky, oversized sneakers have been present for far longer than this year. Starting in the early 2000s, bulky sneakers flooded the market. Low-cost brand like DC, Osiris, Timberland, and Nike began outpouring overweight, floppy-tongued, overbearingly bulky sneakers after receiving positive feedback from the sneakerhead community. Figureheads, such as rappers like Cam’ron, idolized Timberland shoes in their songs and skaters like Rob Dyrdek made sponsorships with brands like DC. At the time, high fashion houses like Louis Vuitton and Balenciaga disregarded the trend due to it not reflecting the interests of the more affluent class in American society.

However, enough time has passed; 2017 marked the introduction of bulky, overweight sneakers to the high fashion community. Earlier this year, the brand Raf Simons released their now infamous shoe, the ‘Ozweego III’. The shoe received heavy criticism, with critics saying that Raf Simons’ Ozweegos are a “lowbrow, uneducated” approach to fashion that “attempted to disband the art of high fashion”. To the ever-revolting fashion designer community, this is the best possible response. The fashion world is constantly evolving and reconfiguring itself, so any obscene trend has the potential to cement itself in fashion history and culture. After the Ozweegos, Balenciaga released their now signature shoe, the ‘Triple S’. After the Triple S followed Yeezy’s Waverunners. Other high fashion houses like Gucci and Louis Vuitton have previewed their addition to the bulky sneaker trend and are set to come out next year.

It seems likely that bulky sneakers will stay in 2017. Low-cost brand Zara just released their bulky sneaker during early December for the price of 36 dollars–little in comparison to the average price of high fashion sneakers (400 to 800 dollars). As time goes on, bulky sneakers will fall to the wayside and become a mainstream aspect of streetwear, new fashion trends will emerge, and the cycle will continue.