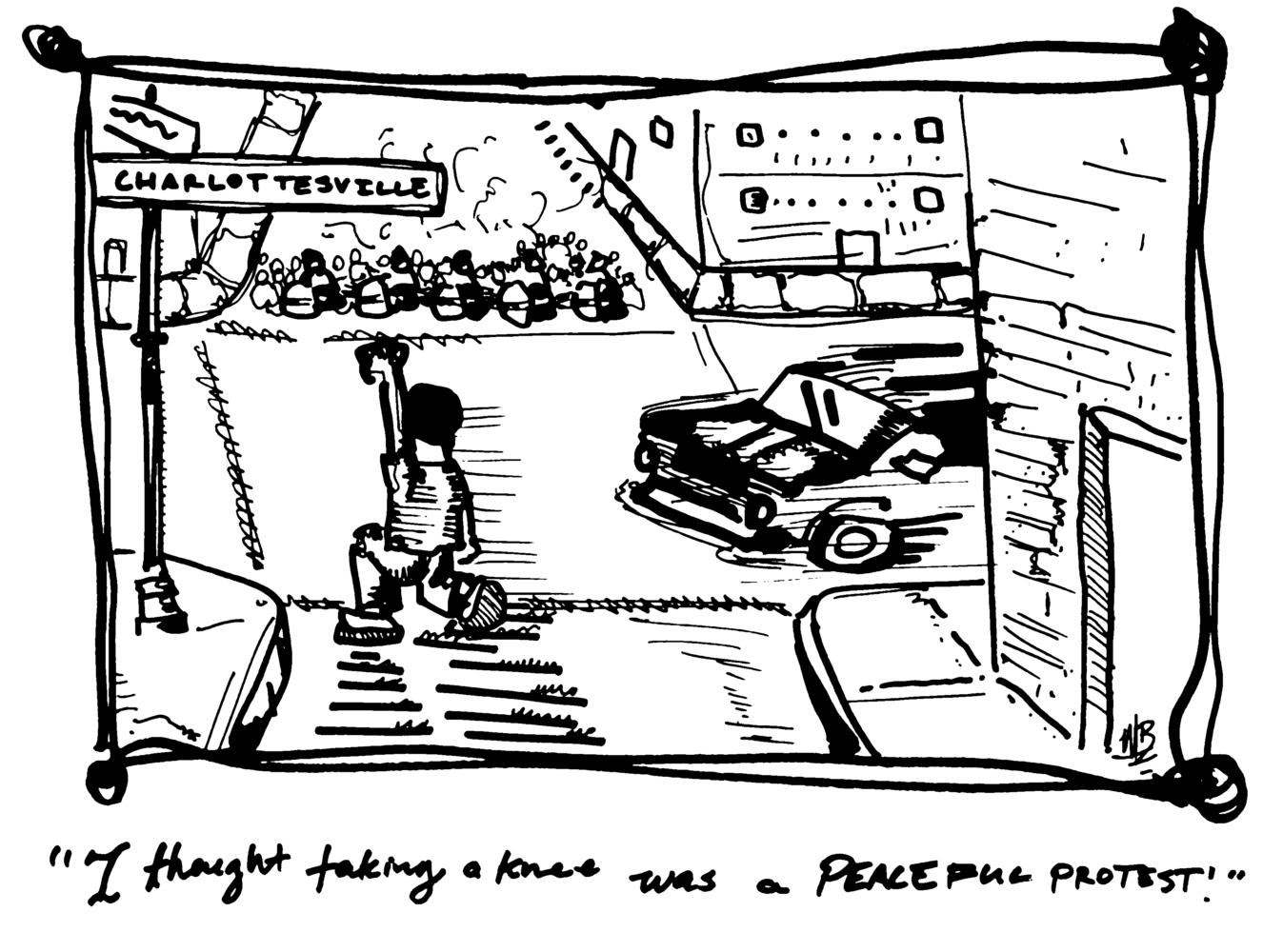 The black movement can propel itself, but will unfortunately fall short, unless abetted by white involvement, which transpires into undeniable change within America.

According to theWashington Post, in 2017 alone, 166 black people have been crucified by an oftentimes, insensitive emblem of valor and refuge; America’s police. Continuously, African Americans have rivaled a primitive notion of white ascendency, which has perpetuated itself within American society. To credit, the substance of white superiority in America has almost edged the ambitions of African Americans in becoming an immutable change for alleviating the misfortune upon black individuals.

With immense strides in the social and political reformation of America, demonstrated by the ‘atl-left’ in Charlottesville and by Colin Kaepernick, personified the First Amendment forging controversy towards traditional American lifestyles. Though numerous African Americans have confronted social injustice and discrimination in more ways than one, at this moment in time, can we credit the modest actions of white people in advancing the black movement?

The death of Heather Heyer, a young woman killed by a nimble car, penetrating a crowd of anti-KKK/ Neo-Nazis protesters, initiated the eradication of Confederate statues. In previous years, conversations were derived in light of the negative connotations these figures emphasized, but it wasn’t until a white individual died at the expense of a revolution — established by African Americans — that dialogue became nationwide.

At the time, social platforms and media outlets plastered Heyer’s name on trending headlines, many labeling her as a martyr — a person killed based on his/her beliefs. It’s quite ironic to know that African Americans have challenged opposition, implemented a social movement (#Black Lives Matter), and have died due to a wretched criminal justice system and authoritative force, but they are still seen as radical and threatening. Yet, in welcoming white people who share common notions as African Americans, to latch onto a generational evolution of black progression in America, it seems as if advancement greatly depends on the privilege and commentary of white people.

According to a video on the New York Times, Trump asserted “I think there’s blame on both sides. What about the alt-left that came charging at the alt-right? Do they have any semblance of guilt?” Reiterating a monotonous American history and its repugnant American figures — i.e. Robert E. Lee, Roger Taney, Albert Sydney Johnston, etc. — Trump clearly declared that his conviction in the preservation of Confederate statues is appropriate, and contrasting opinions are un-American. Reciting opinion as fact, Trump’s grotesque remarks emphasized that both sides were bombarding one another, but in fact, the ‘alt-right’ initially drafted civil disobedience causing a fervent ‘alt-left’ to hinder forceful acts of hate — denouncing a radicalized ‘White Lives Matter’ insurrection.

This appalling commentary imparted by Trump solidified a communal ideal already held by the black movement: annihilation of white supremacy. The discharge of Confederate statues, at the rate shown in August, should have been previously established by the innate counteraction of the American people, not simply to contradict statements made by Trump. Endowing cities with the privilege of condoning the many shapes and forms of white supremacy is an astringent slap in the face towards African Americans, who denounced it without the need for the white community to convey their opinions on the matter. As to why our country has finally embraced taking a stance on dilemmas that pertain to racial injustice, is an action that African Americans have been advocating for.

August 12, Heather Heyer’s death, showcased to white people in America that not only African Americans were dying as a result of contentious protests, but their own people as well. Further inducing white America, in cities like Durham, Gainesville, Annapolis, and Austin, to abolish Confederate monuments — adequately demonstrating a unified rebuttal of white supremacy: a sense that African Americans have accentuated since the civil rights movement.

What’s most astonishing is that in Trump’s statements, according to an article in The HuffPost, he labeled white nationalists as “very fine people”, but supposedly African Americans who kneel are hysterically “sons of bitches”.

In late August of 2016, Kaepernick placidly sat while the National Anthem rang throughout the ears of thousands, emboldening a political movement within the impartial National Football League (NFL). The consciousness of black discrimination and police brutality influenced Kaepernick’s actions in taking a stance that remained without resolution. He enforced that his methods of resistance were not a blatant negligence towards our defiant military, according to an article from NinersNation. Kaepernick valued productive conversation and conversed with former Green Beret, Nate Boyer, to determine a highly respectable form of protest towards the anthem. From that moment forward, the infamous ‘take the knee’ crusade began to progress, with only Kaepernick and very few athletes, propelling a well-needed disturbance for an “un-woke” America.

It’s now late September 2017 and dolefully what churned prominent African Americans, athletes, in particular, to firmly express their concern for the black community, was to be labeled as a

The discharge of Confederate statues, at the rate shown in August, should have been previously established by the innate counteraction of the American people, not simply to contradict statements made by Trump.”

S.O.B, by Trump himself. A movement once pertaining to the raw adversities of average black individuals, transpired into a meager resistance against Trump’s diction, further distancing the actual connotation of ‘take the knee.’ With Kaepernick facing unemployment, afflictive remarks from the opposition, and gradually transforming into a current day black advocate, it’s almost hysterical to realize that his stance avowed 13 months ago. But, just recently numerous NFL athletes decided to kneel.

Where were these athletes when Kaepernick commenced with the motion to kneel last year? If it took a white male to arouse their frustration over the injustices of African Americans, then they are the true issue. The bystander amongst a nation containing the privileged and oppressed. Naively gazing from the sidelines upon a movement, they must have deemed as contentious, but assuming for the NFL, admirable publicity entices viewership.

Frustratingly enough, a black movement authorizes unison amongst African Americans to become a singular entity in combatting systematic racial tensions engraved since the birth of America. An entity undivided, especially consisting of commanding black people, is met with antagonistic societal ideals of racial inferiority. In accepting white people to eradicate discriminatory beings with peaceful protesting, it expands the questions as to which community propels change. A black movement could encounter 166 deaths of African Americans before gaining an inch towards its primary objective, but with aid from the white community, change is a step away.

YOUR TURN: Are the comments of white individuals moving black progression within America? What does ‘Take The Knee’ mean to you? What is your personal opinion on the impact that Charlottesville/’Take The Knee’ had on Americans and their beliefs? Has Trump been able to awaken Americans in realizing the importance of eliminating prejudice or has he only encouraged a raging opposition to unify?