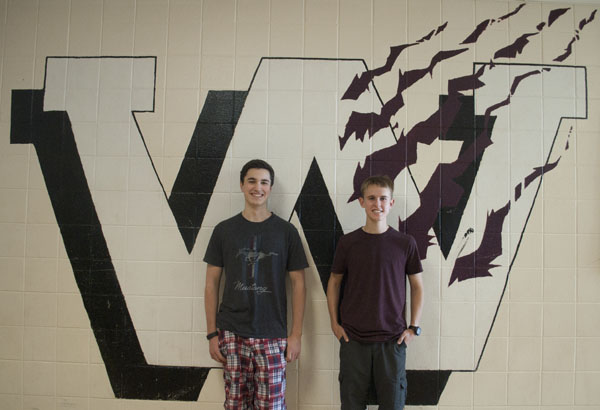 Alec Ashforth and Robert Herhold know that it’s always about the W.

Wakefield’s valedictorian and salutatorian prepare for their grand finale

Students at Wakefield High School are wrapping up the school year as they prepare to start their new lives as adults. Within these four years of high school, each student has left behind a small legacy that will live on even when they are gone.  For students such as Robert Herhold, valedictorian, and Alec Ashforth, salutatorian, their high school years have been full of great accomplishments and academic success.

Herhold will be the class of 2017’s Valedictorian.  Out of a graduating class of four hundred and fifty students, Herhold ranks number one based on his weighted GPA.  This coming fall semester he will be attending NC State University for computer science and mathematics. Through all this hard work he has learned many valuable skills along the way.

“One thing that helped me a lot was to set a goal for myself early on, and to do whatever I had to in order to achieve that goal,” Herhold said. “ For me, by the end of freshman year I realized that being at the top of my class was a possibility, so I decided then that I would take whatever classes I had to in order to get there.”

This kind of motivation is an important factor in reaching one’s full potential.  Like Herhold, Ashforth is graduating at the top of his class earning the position of this year’s salutatorian.  Alec will be attending Duke University and hopes to major in mathematics.

“I’m really excited to be able to pursue more of the classes I am interested and have more freedom between classes to do the things I love,” Ashforth said.  “I feel like a combination of hard work and good luck has finally helped me get to this point in my life.”

Both students found that by utilizing all their resources they were better able to maximize their true learning abilities.

“I would always go to the teacher for advice about college or grad school and always felt they were willing to listen and offer their own experiences as advice,” Herhold said. “There are great opportunities for students to advance their education outside of Wakefield through taking classes at NC State to knock out college credits.”

Alec agreed that there are many opportunities for learning around the school that can prove useful.

“Grades will matter when you are trying to get into colleges,” Ashforth said. “You really need to be willing to ask a teacher for help in subjects you’re struggling with and to use resources such as Khan Academy. For me it proved to be very helpful.”

Four years has given these young gentlemen a lot of time to grow and experience a plethora of what Wakefield High School has to offer.  Looking back there is little they feel they would want to change about their high school experience.

“Overall, I’m pretty pleased with my high school experience,” Herhold said. “I guess if I could change anything I wish I would have been more social in high school, but it honestly doesn’t matter to me.  I think some people would say I spend too much time studying, but it’s worked in my favor.”

“I wish I had focused on only particular clubs I found interesting instead of being in a bunch and not being very involved,” Ashforth said.  “ I would have liked to have focused more on my investment club because I really enjoyed it and found it interesting.”

Both Herhold and Ashforth are off to a bright start as they enter their college years.  With their hard work and great efforts throughout school they set a strong role model for younger students hoping for success.

“The best advice I can give to anyone is to be yourself and to not be afraid to challenge yourself,””

Herhold said. “ I was kind of the math and computer nerd that listened to heavy metal music, but look where it has gotten me.”
Tweet