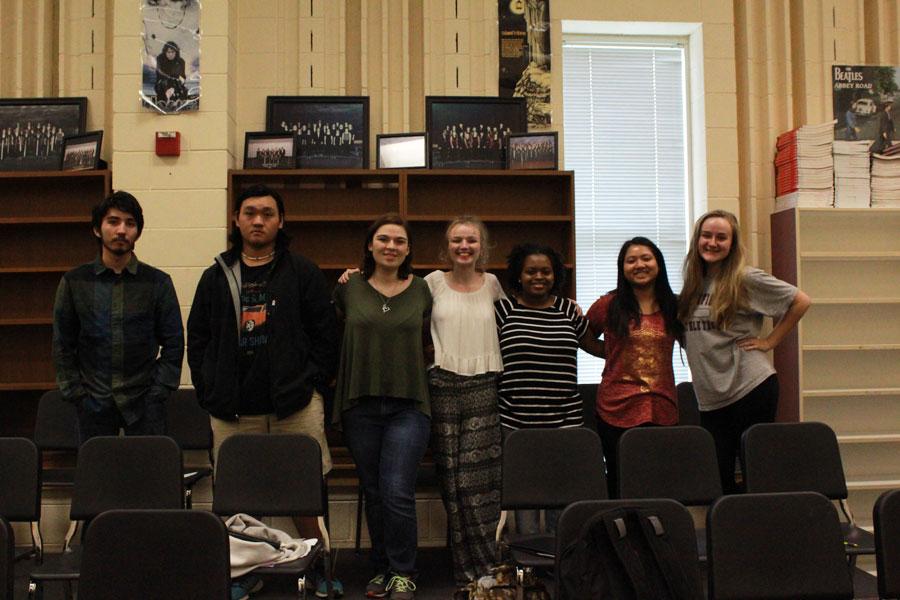 Soloists in Chorus who competed in the statewide Music Performance Adjudication competition, pose for a picture. (Staff Photo by Chase Cofield)

Soloists in Chorus who competed in the statewide Music Performance Adjudication competition, pose for a picture.

Wakefield High School’s Choral group graced the main stage at Franklin Academy on Feb. 25, 2017 to face the music and put their voices to the test. This year’s Music Performance Adjudications (MPA’s) gave the chamber group, as well as a selected solo ensemble, a valuable opportunity to perform and collect criticism from well-trained judges.

“It’s not really a competition because we’re not competing against anyone but ourselves,” chorus director Philip Mullinax said. “The Music Performance Adjudication is the best thing the [North Carolina Music Educators Association] came up with because we’re singing for a judge and the judge is giving us comments and telling us what we need to work on.”

Even though the MPA’s are not ranked among schools, the pressure to perform well still weighs heavily on all involved.

“It’s really similar to having an audition,” junior and solo ensemblist Zack Heinlein said. “I went in and introduced myself, sang and said thank you and that was about it. It was very similar to past auditions.”

The overall system for the competition is set on a ten point scale, superior being the highest and poor the lowest.

“You score points up to 100. There’s different categories that they score in,” Mullinax said. “It can be anywhere from 1-20. Overall we scored a superior–a 95 percent.”

Besides the numerical scoring process, judges also give calculated critiques of each performance.

“The judge was very nice,” senior and ensemble soloist Riley Griffin said. “They have to be nitpicky with songs, but a lot of it was just stuff that we can improve on.”

Both the choir and the solo ensemble group encountered hurdles along the road to finally competing at the MPA’s.

“A lot of the choir was sick, that whole month of February,” Griffin said. “Flu season, it was horrible. Apparently, we can sing when we’re sick.”

Performance and preparation as a soloist differs from preparation with a large choir, overall awareness being a large factor in the entire process.

“When we’re in a choir we have to listen to each other constantly, and we have to practice working together,” junior and ensemble soloist Elizabeth Pham said. “Being in chamber singers, you have to really work together.”

Under Mullinax’s guidance, the choir was able to bring out the very best of their own innate talents.

“We’re never perfect. We strive for perfection,” Mullinax said. “Really my job is to teach them how to practice and teach them how to be independent musicians. It’s really up to them whether they’re going to do that or not. I’m just there for the fun of it and to remind them of things we’ve done in rehearsal.”

Participation in the competition is not required by NCEM (North Carolina Music Educators Association), but involvement will grant students the ability to compete in other state level competitions. Taking part in the event also reinforces students’ musical passions.

“[MPA’s] really make me feel more confident in my ability to sing,” Heinlein said. “I’m definitely going to pursue it.”

Growing and gaining experience as an adolescent musician is crucial to future career choices. Competing in MPA’s leaves all involved with a sense of accomplishment and pride.

“Actually [performing was my favorite part].

“At that moment you’re like ‘I’m actually doing it’ and then after it’s the best feeling ever and you don’t know what’s going to happen.””

” Griffin said. “But in that moment it’s everything.”
Tweet