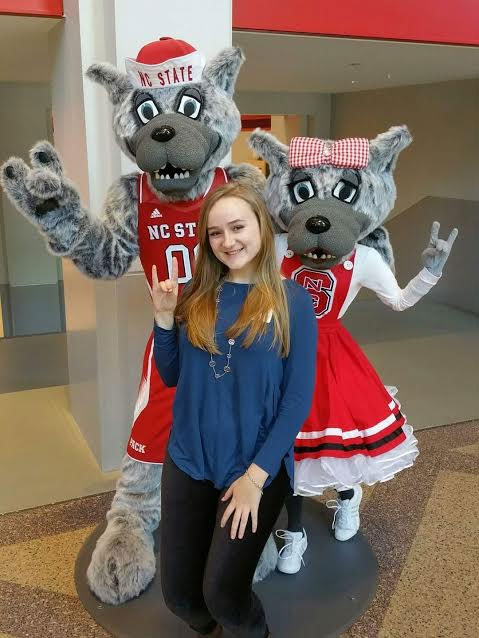 Senior, Natalie Collier parks herself next to some future friends at NC State. (Photo Courtesy of April Collier)

Senior, Natalie Collier parks herself next to some future friends at NC State.

Senior Natalie Collier has been presented with the highly reputable and respected Park Scholarship. Offered by NC State University, the entirety of the Park Scholarship includes four years of paid tuition to NC State, covering all fees, room and board, books, travel costs and personal expenses.

“[The scholarship] is based on the four aspects of scholarship, leadership, service and character. It focuses on past achievements and also emphasizes the promise you show for the future,” Natalie Collier said. “The whole process is to assess how well you’re fit for the program in the ways that you try to take initiatives in your community, look forward to the future and what you can do to make it a better place.”

The extensive application process includes completing an application, submitting writing supplements and participating in several interviews to be examined for candidacy.

“It’s a lengthy process,” Natalie Collier said. “I was one of two students nominated by Wakefield. From there, you have to fill out an application, write three different essays and also submit a resume. You have to list out pretty much everything about yourself.”

Even such a seasoned student and interviewer as Collier has experienced nerves after a big interview. Natalie Collier’s mother, April Collier, offered positive support and reminders along the way, especially following an important meeting.

“Natalie tends to be really hard on herself, so it was my job to keep her positive,” April Collier said. “Her hardest moments were right after a telephone or in-person interview. It’s so easy to go back over what happened and play the ‘could have, would have, should have’ game, so I just had to keep reminding her that everyone else was in that same boat.”

Natalie Collier exemplified two of her many successful skills when her scheduled in-person interview was impeded by snowfall in Raleigh: adaptation and flexibility.

“Once you are at the semi-finalist level, you’re supposed to go to an interview on campus,” Natalie Collier said. “However, that was the week that it snowed, so we had to do interviews over the phone which was kind of crazy, but it was good that it showed flexibility.”

Qualified finalists were required to visit NC State for a weekend of tours, interviews and group sessions. A unique examination of problem-solving and collaboration skills were presented to Natalie Collier at the finalist level.

“On the weekend [for finalists], we had a bunch of tours to go to with the [program] we had been accepted into. We also had an individual interview with four members of their selection committee which consists of alumni and faculty,” Natalie Collier said.

While Natalie Collier had numerous interview experiences under her belt prior to the finalist weekend, there were still nerves surrounding some of the activities.

“The scariest part [of the weekend] was probably the group activity because you’re graded on that,” Natalie Collier said. “You’re basically given a problem to solve and sat down in a room with a couple of other candidates. They grade how well you solve the problem, the group’s time management, creativity and how well you worked with each other.”

“Her success humbles me. I can’t believe I get to call her my daughter, and I am so thrilled that she has finally found the place where she will spend the next four years,” April Collier said. “We are very thankful to the staff and administration at Wakefield for playing a huge role in her decision and steering her in the direction of NC State when they nominated her for the Park Scholarship.”

April Collier also believes part of Natalie Collier’s success has been a result of surrounding herself with positive influences.

“Whether it be the pastor at our church, her grandparents, her piano teacher, her school teachers, or her best friend’s parents, these are all people that have each had a positive impact and given Natalie different tools for success,” April Collier said. “Natalie seeks out those who can help her and loves to learn from people in all walks of life.”

Natalie Collier balances her time between her passion for chorus and dedication to school studies. She believes the combination of the two have enabled her for present and future success.

“I don’t think I would be as good of a student if I hadn’t have pursued music, but I think if I had just pursued music, I wouldn’t be as dedicated in my scholarly pursuits as I am now,” Natalie Collier said.

A combination of varied skills and interests paired with a strong work ethic has created a plethora of opportunities for Natalie Collier. Working towards her bright future, Natalie Collier hopes to pursue medical school following college. She is also hoping to work with Doctors Without Borders to aid those in war-torn areas as well as developing countries.

“My utmost long-term goal is to work with the Doctors Without Borders program,” Natalie Collier said. “ I want to complete a Biomedical Engineering undergraduate degree with maybe a minor in music and then hopefully go to medical school after that, possibly in France. From there, I would apply for the Doctors Without Borders program and work with them.”

portance of being well-rounded and feeling proud of one self’s character, hoping to inspire those around her.

“I don’t think comparing GPAs with other students and constantly comparing yourself to others is what school is supposed to be,” Natalie Collier said. “The only comparison that [should] be made in the world is comparing yourself to your past self and future self. Nobody’s better than somebody else. It’s if you’re better than your past self. Having that mindset of ‘you are you, and you have the ability to do great things’ I think is way more important than any kind of way you can be measured.”