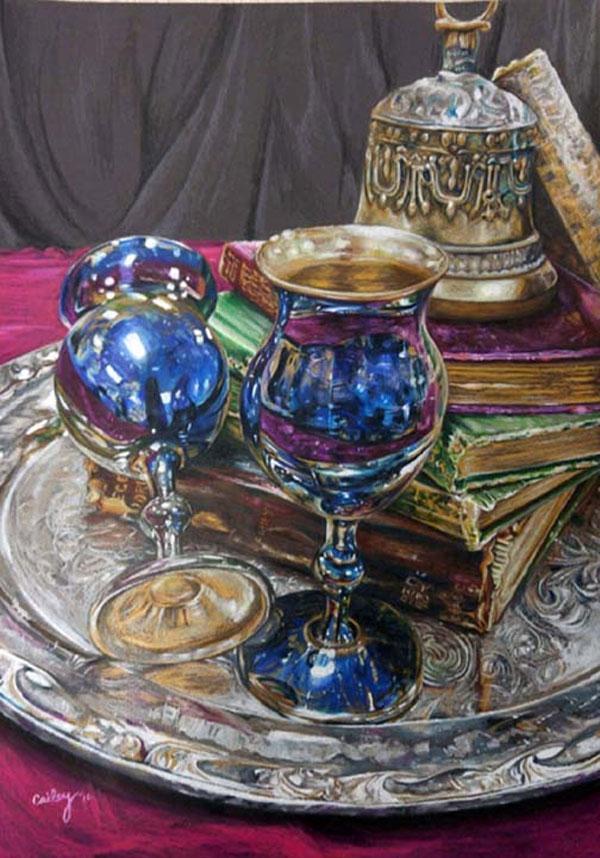 The Women’s Club of Raleigh is an organization that aims to be a voice for the community and boasts the slogan “For the intellectual, philanthropic, and civic betterment of the community.” It has been a part of the Raleigh community since 1904 and ranges in various forms of communal involvement such as offering scholarships, grants, community service programs, lectures, and art festivals.

“I love the Women’s Club,” art teacher Dawn Valentino said. “They offer tons of scholarships.  Some of my students win those every year- some are for art, some are for good citizenship and other things. I really love that they advocate for the arts and for women in general.”

“I won second place on local, but then I won first place at district,” senior Cailey Neuschaefer said. “I was honestly shocked. I mean everyone in the class could tell you that my jaw just dropped because I did not expect it at all. It’s really an honor because the Women’s Club is such a big organization, and I was really excited.”

Neuschaefer submitted a still-life drawn with a type of colored pencil called Prismacolor.

“Cailey did the colored pencil drawing. It was done in Prismacolor colored pencils, and it was a 12 inch by 18 inch piece, so it was quite large for Prismacolor,” Valentino said. “It is a very waxy material, so you have to kind of build up tiny, little layers. She did a still life drawing of metallic objects, old books and chalices and things. It took probably two and a half weeks in drawing class everyday for an hour and a half. It took a long time, and she worked really hard and got every single detail. It was absolutely gorgeous.”

Despite how time consuming and challenging the process of creating the piece was, Neuschaefer is proud of the final result and what was learned from it.

“This piece, I’m going to be honest, it made me cry,” Neuschaefer said. “It was so hard. I’m a little bit of perfectionist, so I really wanted to get everything right, and I probably spent about twelve hours or more on it. It was intense, that’s one word for it, but honestly I don’t regret a single minute of it. A lot of it was learning because I had never drawn with Prismacolors on black paper, which is like a completely different feel, so I had to figure that out as I went.”

Neuschaefer’s piece won first in the district level for colored pencil and will thereby move onto the state level.

“Alana made a camel out of clay with a beautiful blanket on its back, and it was lying down,” Valentino said. “It was really realistic and fairly large,  about fifteen inches long by six inches high, and all made out of ceramic and then painted in acrylic paint. It was very beautiful, detailed, and realistic.”

This was Tran’s first time entering a piece in the ceramics category. Yet through this experience, Tran was able to explore a new medium of art.

“[My favorite part was] sculpting [the camel] itself because I started out with a block, and I just carved and carved until I got the shape,” Tran said. “It was really challenging, but after a while, I kind of got the shape of it and added more pieces, and it turned into a camel.”

Winning second place in the district level doesn’t mark the end for Tran as she hopes to continue to improve in her art.

“I hope to get better in mainly painting because that’s what I want to do,” Tran said. “I think I’m going to go to college and major in art.”

Senior Serena Hernandez placed third in the district level of the contest; her entry was in the digital media category.

“Serena did her work in digital media, but she took her photograph on her own,” Valentino said. “We were going to use her photograph for her AP portfolio, but then she decided in Ms. Scoggins’ room to manipulate that photograph into a digital image in black and white and modify it. It came out really beautiful; she called it ‘CeCe in Stars,’ and it had this sort of celestial thing around the silhouette of a woman with a beautiful shadow.”

Hernandez commented on the process of creating her piece.

“I took a picture of my friend over the summer, and I just didn’t really like the background so I just photoshopped a random astrology image in the background,” Hernandez said. “I had free time during my digital media class and I thought [my photograph] was kind of cool.”

With all the hard work, Hernandez is proud of the final outcome.

“I think the contrast is really cool,” Hernandez said. “There’s a really big shadow in the front that just kind of makes everything stand out more.”

At the end of the day, Valentino continues to encourage art students to grow in their work and submit their pieces to the world.

“I always feel great when they win something,” Valentino said. “I think they should all win something all the time, every time because I think they’re all amazing and fantastic. You just never know what artists that judge artwork are going to pick because judging art is very subjective. There’s criteria that I’m sure they’re looking for, such as excellence in technique, but you just don’t know which ones might win and so it’s always a surprise. The students are always very elated when they find out themselves because there’s maybe five or six opportunities throughout the year so if you win one it’s a pretty big deal.”