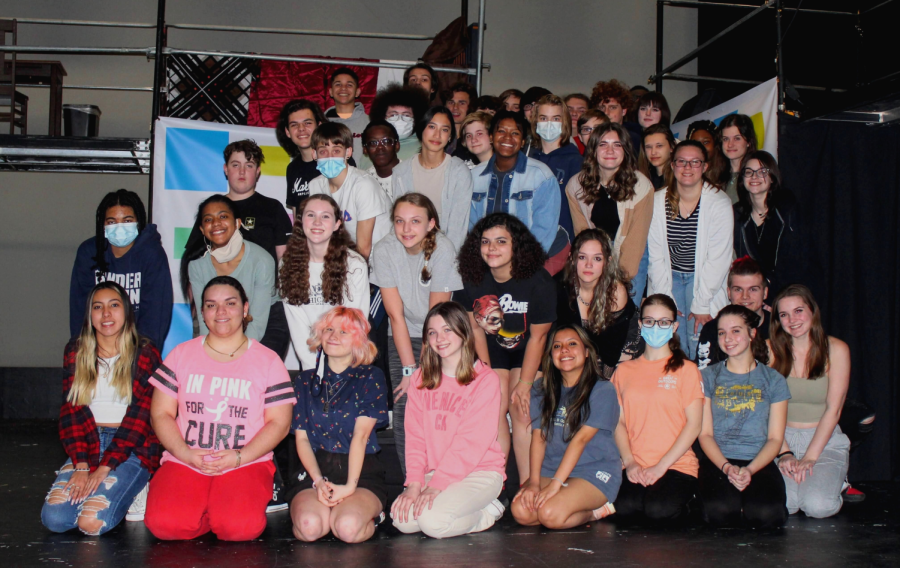 The cast and crew of Emma! A Pop Musical gather. They’re one of Wakefield High School’s two spring productions.

It’s official: the second show Wakefield High School is performing is Emma! A Pop Musical. This production is based on a Jane Austin novel and follows a high school student who matches her classmates – and teachers – up with one another. The cast and crew for this performance are excited to put this fun piece on for a live audience.

This show is coming after Wakefield’s first production of the semester, Anne of Green Gables. These two productions are vastly different, Anne being set in the early 20th century while Emma takes place in the early 2000s. However, both shows have a female lead.

Genny Augustine is a junior at Wakefield High School. She has been performing for seven years and is playing the lead role of Emma. The actress loves her role in the show and provides insight as to why.

“I would have to say being able to play a high schooler that’s really similar to me,” Augustine said. “She’s similar in just the way she carries herself and the way she talks, so it’s kind of cool to channel that.”

Wakefield’s shows are typically double cast, meaning two actors will perform the same role, just on different nights. The theatre company separates the two casts by two of the school colors: maroon and silver. However, only a few characters are double cast in this production; one of them being Jeff, Emma’s love interest. The actor playing Jeff in the silver cast is sophomore Adam Hardy, who has been performing since he was in second grade.

I just love getting to work with all of the actors and crew; especially when it gets into crunch time and everyone’s working together to make this a great show.”

“I feel like watching an audience is its own show,” Hardy said. “To see their reactions to what we do can be the coolest thing in the world.”

In the maroon cast, junior Blaise LaCarter is playing the same role.

“I like getting to spend time with my friends and getting to be up on stage doing stuff,” LaCarter said.

These two actors, along with a few others, will be performing their lead roles on different nights. Wakefield High School has a lot of talent, so double casting is a great way to show all of it off. Paul Orsett is the technical theatre and theatre teacher at the school. He is directing both sides of this production.

“It’s a good time, [everyone has heard] the tunes that are in the show even if they don’t know all the lyrics,” Orsett said. “[The audience] is going to leave the theatre with all of those tunes in their head.”

With Anne of Green Gables going on at the same time as Emma’s rehearsal, Orsett has his hands full. He receives help from his student stage managers, senior Maria Hoppough and sophomore Gus Korogi.

Hoppough has been doing theatre since middle school and is finishing her high school theatre career with Emma.

“I do a lot of theater and I’m there pretty late, so it’s hard to have a social life,” Hoppough said. “Besides that, [stage managing] gives me something to look forward to be excited about and talk about whenever I want to make myself sound nerdy to people’s parents.”

Korogi is taking over the stage manager position once she graduates.

“It’s really awesome because I feel like the actors and everyone are turning it into something really fun and we’re having a lot of fun being able to do whatever we want with the script,” Korogi said. “I just love getting to work with all of the actors and crew; especially when it gets into crunch time and everyone’s working together to make this a great show.”

The cast and crew have dedicated most of their nights to these rehearsals to make Emma! A Pop Musical a fun and energetic show to experience. The setlist has a lot of music the audience is bound to know, including some Whitney Houston and other incredible old classics.

“I’m excited for the songs because it’s a pop musical so everyone knows all the songs – and if it’s a live audience, everyone can sing along,” Augustine said. “[The audience] can start doing the thing where they clap and everything and it’s really fun.”

For anyone who is interested in seeing this 2000s coming-of-age high school musical, they can go to Wakefield High School on April 28, 29 and 30 at seven p.m. The show on the 30 also has a performance at two p.m. Tickets are online only on the Wakefield High School theatre website. Stage manager Korogi offers another reason as to why people should come see the show.

“It’s supporting the program and also because it might be underrated in your mind,” Korogi said. “I feel like a lot of people instantly write it off cause it’s a high school show, and a lot of times there can be parts of these shows that are like ‘Wow that’s actually cool I wasn’t expecting that.’”