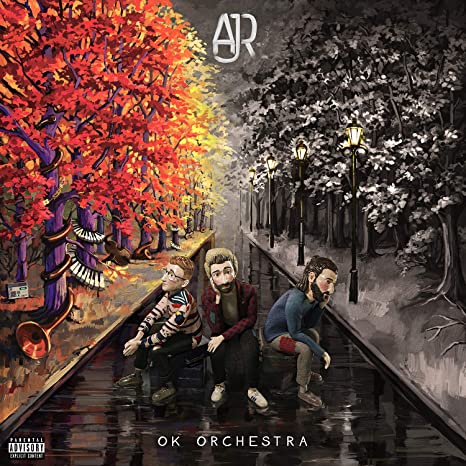 On March 26, 2021, indie-pop trio AJR released their fourth studio album ¨OK Orchestra¨, the album consists of 13 songs and the theme of navigating the adult world discussing such topics in their songs such as reaching adulthood, balancing work and your personal life, growing up as a child of divorce, anxiety attacks, mental health, and more. The band´s ability to give a real perspective on these topics is what makes the album a very unique piece of music to listen to.

The band released the album´s first single in February of 2020 called ¨Bang!¨, becoming a major hit, the song talks about the transition from their childhood to adulthood and maturity, the song stood out for using the voice of the announcer of New York´s subway system in between each verse singing ¨Here we go¨ or ¨Metronome¨ which have regarded as an iconic staple of the song.
The band´s third single for their album, ¨My Play¨ discusses the experience of being a child of divorce and what effect that does on a person as they get older and experience love, fearing of repeating his parents´ love for each other dying. What makes the song stands out is that it´s a topic that many people who grew up with divorced parents can relate to as it´s about the feelings and thoughts they deal with for something like this.

The band´s fourth single of the album, ¨Way Less Sad¨ is regarded by some as the best song in the entirety of the album. The song talks about mental health and gives a positive message about being optimistic despite going through rough times, specifically the COVID Pandemic. The song sample ¨My Little Town¨ by the folk-rock duo ¨Simon & Garfunkel¨. It has been regarded by many as the best and strongest song of the album.

A special song in the album is ¨OK Overture¨, a song that samples every other song within the album as a crossover. Other songs of the album are just as great but the three I previously mentioned are my favorites. There are other songs that I haven´t discussed but I recommend you to go listen to them and the ones I already mentioned as they are just as good. Each song on the album stands out in its own way and that in my opinion is what makes this album the best by “AJR” and of the year.