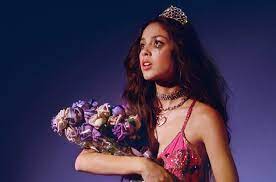 Picture this. You’re a 17-year-old actress who just broke up with their costar. You hop on TikTok and share part of a song you wrote about the experience. It goes viral. You decide to make the song into a single and release it. Not only does it make it onto the infamous Billboard Hot 100, but it holds strong at number one for a month. It also makes history by becoming the first song to stay in the top 10 for an entire year.

This is what happened to the pop sensation Olivia Rodrigo. Now 18 years old, she has released an album named Sour and announced she would be going on tour. Her music has consistently performed well and helped/ inspired her audience. Many people have found solace, post-heartbreak, in her music.

In addition to her acting and music, Rodrigo has a vast social media presence and is never afraid to be who she is in front of her millions and millions of followers. Not only is she entertaining people, but she is encouraging her audience to stay true to themselves and never hide their personalities to appeal to others.

As many know, social media can be a very toxic place, especially if you have issues with self-confidence and positivity. Having such a young pop star emerge with an equally young audience can be risky, But Rodrigo makes sure her audience feels comfortable with who they are. Of course, this is such a tricky balance to strike, but she does it beautifully.

Rodrigo is just starting what I’m sure will be a long and fruitful career. Given her success and positive impact on her fans, who knows what she will gift us with next. She is a pioneer for young people with big aspirations, and she has already made such an incredible impact on the world. I am confident in my statement that Olivia Rodrigo is one of, if not the, best person of the year.