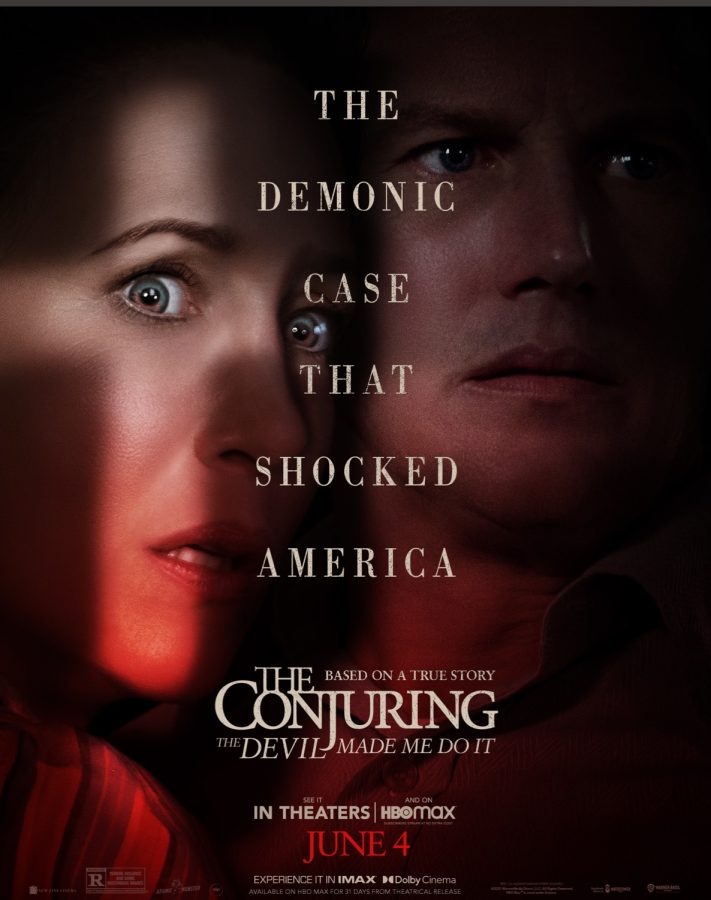 The Conjuring movie franchise releases a new horror film in 2021.

The Conjuring: The Devil Made Me Do It

This film is Rated R; if I entice you to watch it, please do so responsibly.

The third movie in the Conjuring franchise is undoubtedly the most frightening horror film released in 2021. Not to mention the “based on a true story” that pops up during the movie. The Conjuring universe follows cases from real-life paranormal investigators and demonologists, Ed and Lorraine Warren; portrayed by Vera Farmiga and Patrick Wilson in the movies. Other cast members include Sarah Catherine Hook, Ruairi O’Connor, Julian Hilliard, and Bonnie Aarons. The acting in this movie is phenomenal; it makes you forget you are watching actors in a movie. The Vera Farmiga and Patrick Wilson duo is top tier in every Conjuring movie; they do an amazing job representing the actual Warren couple.

Directed by Michael Chaves, “The Conjuring: The Devil Made Me Do It” takes place in Brookfield, Connecticut. It revolves around one of the most spine-chilling files from the Warrens about the trial of 19-year-old Arne Johnson who was arrested for committing first-degree manslaughter. Early in the 1980s, the court and judges were shocked as it was the first time in history that a murderer tried to plead not guilty with the claim of possession. It all began with the exorcism of 8-year-old David Glatzel, who started to experience vivid hallucinations after moving into his new family home. The exorcism was nothing like the Warrens had experienced before; it went so wrong that it led to Ed suffering from a heart attack, sending him to the hospital, and Arne getting possessed instead of David. Afterward, Arne starts to act uncanny and he eventually kills his landlord, Bruno Sauls, under the influence of demonic possession. The husband-wife Warren team go through a series of events in the film trying to investigate which evil spirit manipulated Arne to kill someone, and how to put an end to it.

Some more potential conjuring sequels are rumored to come out in the years to come. In this specific film, Lorraine Warren was having difficulties with her ability to see things exactly how they took place in the past through her visions, so the next movie might add more to that. As someone who absolutely loves a good scary movie, take it from me that this third conjuring film leaves you wanting to sleep with a light on.