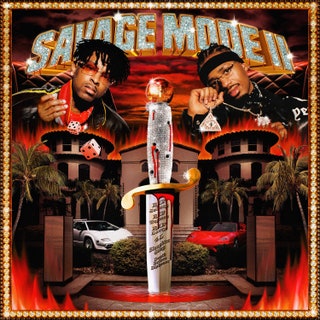 Although 2020 might not have been the best year, there is no arguing that it contained some FIRE hip-hop albums. The best and most underappreciated of which being Savage Mode II by 21 Savage & Metro Boomin. I know that this might be a hot take as 2020 was also the year of albums like Eternal Atake by Lil Uzi Vert and My Turn by Lil Baby, but neither of these albums got me as fired up as I was the first time I listened to Savage Mode II. With features from the prolific Drake and Young Thug, this album is just what we needed to forget about all the madness that 2020 had in store for us.

Savage Mode II featured an exciting cover that called back to album covers from generations past. The way each song flows into the next is just what we expected from a veteran producer like Metro Boomin. Listeners were surprised to hear one of Hollywood’s most famous voices narrating the album between songs. This was the voice of Morgan Freeman. His smooth and wise voice is heard giving certain songs context and delivering messages of advice and encouragement to the audience. My favorite of his appearances is his “Snitches and Rats (Interlude)” where Freeman explains the difference between a snitch and a rat before one of the album’s most hype songs.