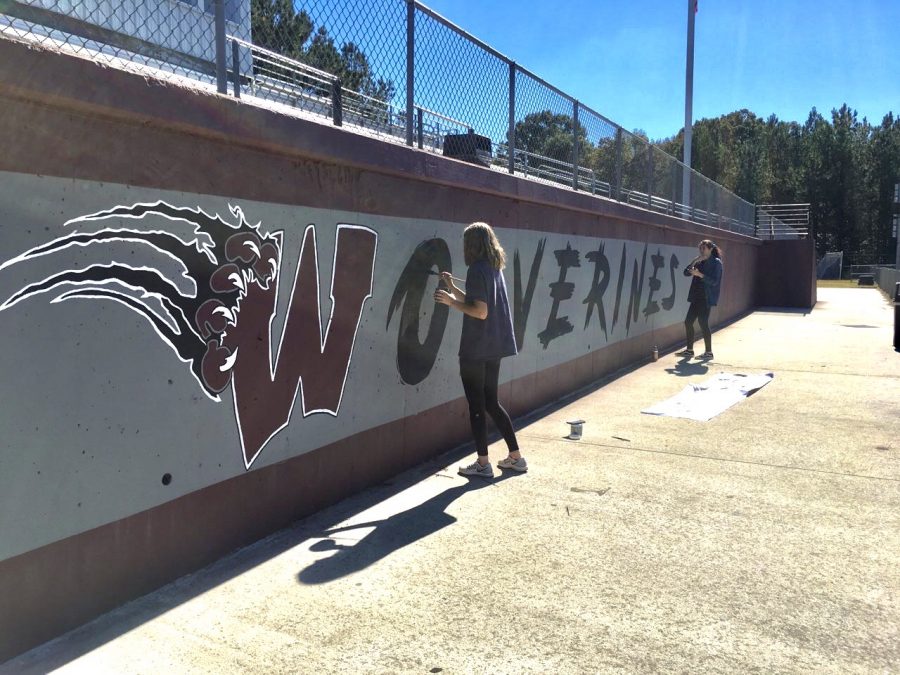 Mira Valentino and Angelina Ramirez finish the fine details of the Wolverine mural.

After 20 years, the outdated "Wakefield Wolverines" design has been replaced with a vibrant, new mural.

Wakefield’s Wolverine Football Stadium has been recently embellished with a spirited mural: a 50-hour student-led project. This huge undertaking was completed Oct. 25, just in time for the big homecoming game.

The sign is about four and a half feet by 55 feet and two inches, including the grey box around it that serves to make the letters stand out from far away.

“It was just so dingy looking,” Wolfe said. “I wanted to clean it up along with the rest of the campus.”

Ramirez developed many designs, four of which became finalists for Wolfe and Dawn Valentino to choose from. The finalist was inspired by a modified “Big, Bad Wolf” font.

“The scratchy letters show movement and accentuate the claw scratches in the letters themselves,” Dawn Valentino said.

The N.A.H.S. presidents put their heads together and came up with the idea of putting the clawmark on the left side of the “W.”

“[We were inspired by] the Wakefield Athletics logo because it has such a distressed look,” Ramirez said.

The most detailed part of the process was creating stencils for the lettering out of large pieces of paper. Printing the letters didn’t work, so the crew opted to project them onto poster-sized paper taped to the wall, trace them and then cut them out.

Then, using their makeshift stencils, they traced the letters on the stadium wall with chalk. Dawn Valentino’s art students were instrumental in painting the letters. The week of Homecoming, Mira Valentino and Ramirez spent hours before and after school making final touches and painting the “W” and claw.

“We were able to have good time management,” Ramirez said. “We went for four hours the day before and the day of [the Homecoming game] after school.”

The most significant part of the painting of the Wolverine stadium mural is the mark students leave on Wakefield as they move toward their futures. The paint will last about two decades and witness the Wakefield Wolverines take many “W”s!

“It adds beauty and allowed our club to contribute something,” Mira Valentino said. “We all got to leave our mark.”