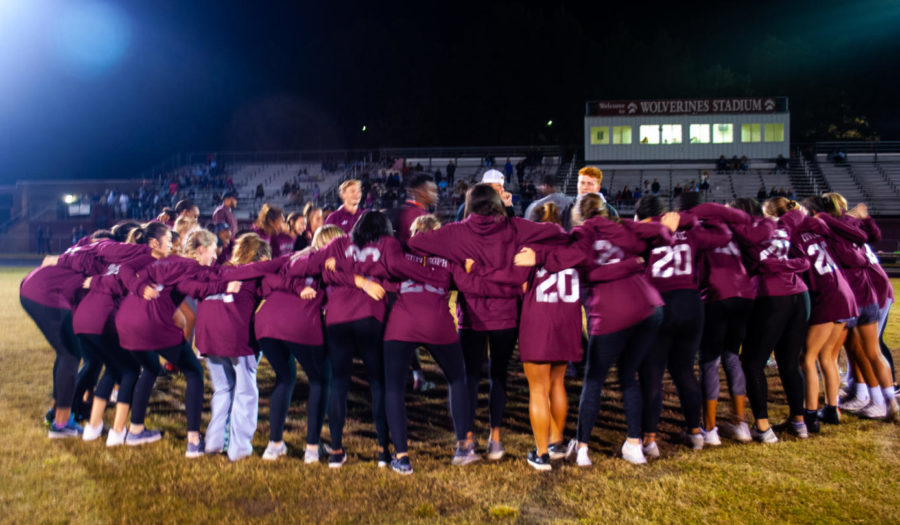 The seniors huddle and get hype for the game.

Homecoming week was a highlight of this fall and before the Wolverines took over the stadium.  On Wednesday before the big game, powderpuff juniors battled the seniors in one of the most anticipated football games of the season. Players and coaches from both teams were ready to show out on game day and represent their class on the field.

“Powerpuff is a great tradition where the girls get exposure to a sport they don’t usually play,” Chancey Wolfe said, Athletic Director. “It’s a fun and exciting game that gets the whole Wakefield community excited for homecoming .”

The senior team was focused on keeping their winning streak from the previous year.  Senior coaches from the varsity football team all had high expectations for their team on game day.

“We’re for sure going to crush [the junior team],” Evan Holmes said, defensive coach for the seniors.

The junior team, however, wasn’t ready to just roll over for the seniors.

“We’ve been putting in work at practice, talking about plays, and getting hype,” said Caroline Singleton, a player on the junior team.

“My only expectation is absolute domination,” said Jay Staniseck coach for the juniors.  “As long as the girls do what they’ve been doing in practice there’s no way we’re not going to win.”

The seniors and juniors are both ready to give it all they got Wednesday night.

The juniors ended up defeating the seniors 21 to 14 in a hard-fought victory.

“This is a big opportunity for the players and coaches and maybe even the community to take something away and learn from this,” said Wolfe. “And we’re ready for a good game.”