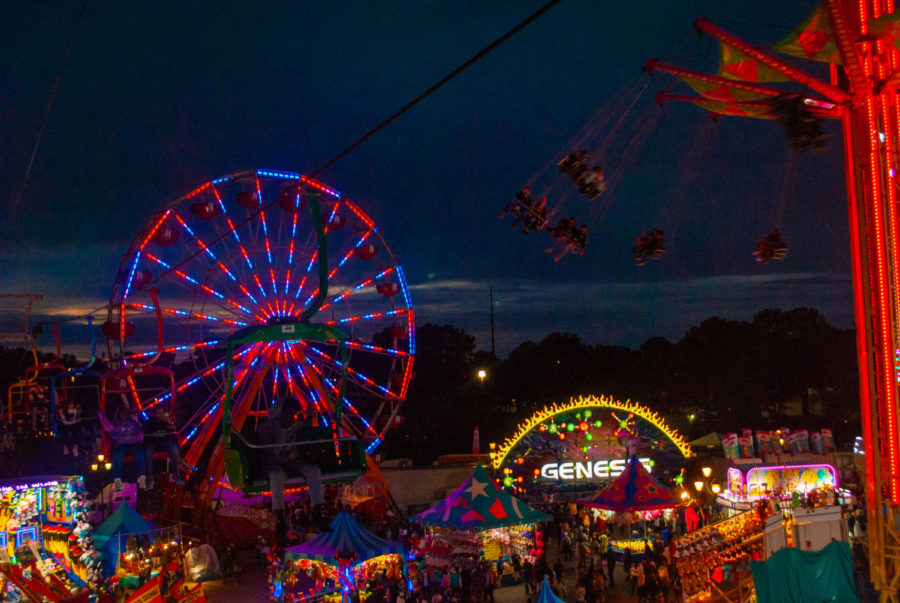 The fair's colored lights shine on a cloudy night.

With mind-boggling rides, otherworldly foods and agrarian excellence as far as the eye can see, the North Carolina State Fair earns a mountain’s worth of crowds annually, thanks to the spontaneity of its character. It’s easy to get caught up within the excitement, but something much more essential lies beneath the deep-fried husk covering this afamed event. From the farmers who compete for exposure to individuals experiencing the fair for the first time in ages, there is an air of cultural impact that the NC State Fair provides. Voices young and old reflect on how much it means to them when in attendance. Past, present and future fairgoers discuss why its arrival effects not only themselves, but the majority of migrants who partake in the festivities.

Jodie Riedel, a Wakefield Horticulture teacher, recalls the various activities that support farmers and pastoral specialists throughout the fair. She lists each competition that often occurs and how it benefits those within the agricultural community.

“They have pig races, horticulture competitions, and celebrations for all of the new products that are on the market,” Riedel said. “It’s an opportunity for [farmers] to showcase a product or something that they’re really good at. They also show you a little bit about [the history of] how certain commodities came around. In a way, it’s going from the beginning all the way into the future.”

For roughly 166 years, the North Carolina State Fair has served as a mecca of ingenuity, entertainment and camaraderie. It joins those from Asheville to Henderson; thousands of Carolinians travel to Raleigh to explore what the legendary occasion has to offer. While its prowess in agricultural feats is certainly a part of its success, those who were raised within the state are more familiar with its innate sense of unity.

Childcare Development teacher Davena Embree is amongst the lifelong residents from North Carolina. Her own childhood romps through the fair have created significant memories, leading her to continue as such into her adulthood.

“The State Fair has been a very important trip that my family and I would take every year,” Embree said. “We would always have it as an annual outing. It’s a tradition I have been doing since I’ve lived in North Carolina. I think it’s a good way of building a community.”

In addition, Emily Pickle is a high school senior who also shares a lifelong status of residency. She acknowledges the same aspect of communal growth regarding the NC State Fair’s identity, given her experience as a fellow frequent fairgoer.

“Honestly, it tied me a little bit closer to the community,” Pickle said. “At the fair they didn’t just have carnivals, food and rides, but also all sorts of artistic displays from areas around the state. It’s a place where everyone can have fun and interact with each other.”

For locals, the North Carolina State Fair exudes an air of nostalgia each year. But to those who are unaware of the fair and its contents, anticipation and intrigue is at an all-time high, especially from the perspective of senior Madison Norris. While lacking any memories of attending the event, Norris shares her insights on why she chose to venture into such unfamiliar territory as it makes its arrival.

“I’m attending the fair since it is my senior year,” Norris said. “I really want to try to make the most of it and do as much with my friends as possible. I felt like it would be a missed opportunity to not go with [my friends]. I’m really happy that everybody seems to have such a great time at the fair, and I can’t wait to be a part of it this year.”

During the short time that Raleigh has with the North Carolina State Fair, fairgoers flock together to recognize the cultural significance that the event brings. Rural visitors seek out the fair for representation and competition, in hopes of reintroducing themselves to the open market of the state. Carolinians born and raised around the state fair acknowledge its arrival with sentimental value. Residents without experience expect a celebration full of vivacity and warmth as the North Carolina State Fair solidifies its presence in the minds of those around it. Whether digging in on a hefty turkey leg, whirling around on the Cliff Hanger ride or building unforgettable memories with loved ones, this celebration truly lives up to its motto: “Nothing Could Be Finer than the NC State Fair!”

“It is something that is rooted in our history,” Riedel said. “It’s a lot of different facets of North Carolina. You have people from all walks of life, from the mountains to the coast, that come to this event. It doesn’t matter what your socio-economical class is, or what color you are. It truly unifies the whole state.”