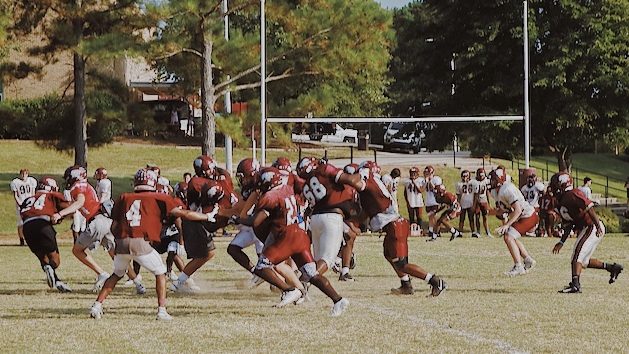 The varsity football team practices their plays for their weekly games.

James Ward is the new Head Coach on the football team this season. Ward came to Wakefield High School with 20 years of coaching experience behind him. Ward is known so far on the team for being a ‘player-coach’ and being very personable and understanding to help build a bond with his players.  So far, he’s lead the team to a 5-5 record and if the team can beat Knightdale this Friday, November 8, the team will qualify for playoffs.

Linebacker, Israel Gore, is a junior on the team this year and is soaking up all of Coach Ward’s expertise.

“I think that Coach Ward is a good coach and he definitely knows what he’s doing. He is leading us in a good path and coaching all the players like he’s supposed to,” Gore said. “I think with his help we could really be something special.”

“He just brought a whole new attitude. He brings the feeling of family and togetherness,”  Wilson said.

Aside from the new coach, the team has bigger goals that show their great motivation for looking at the season ahead of them.

“Right now we are working on consistency and getting better each week after each game,” Wilson said. “The goal is to just take it one game at a time and let everything else take care of itself.”

Gore is reaping the benefits of the consistency and hopes it’s enough to take the team to playoffs.

“The team has a good offense and defense and we also have good leaders to help us out. I think we could make it far in the playoffs this year,” Gore said.

Senior quarterback, Trexler Ivey, has been on the varsity football team for three years.

“I think that we have played very well, but we can always play better. We haven’t played a perfect game yet, and that’s what we are striving for,” Ivey said. “We have made some mistakes that cost us but overall we are playing really well.”