How Spider-Man swung back into the MCU 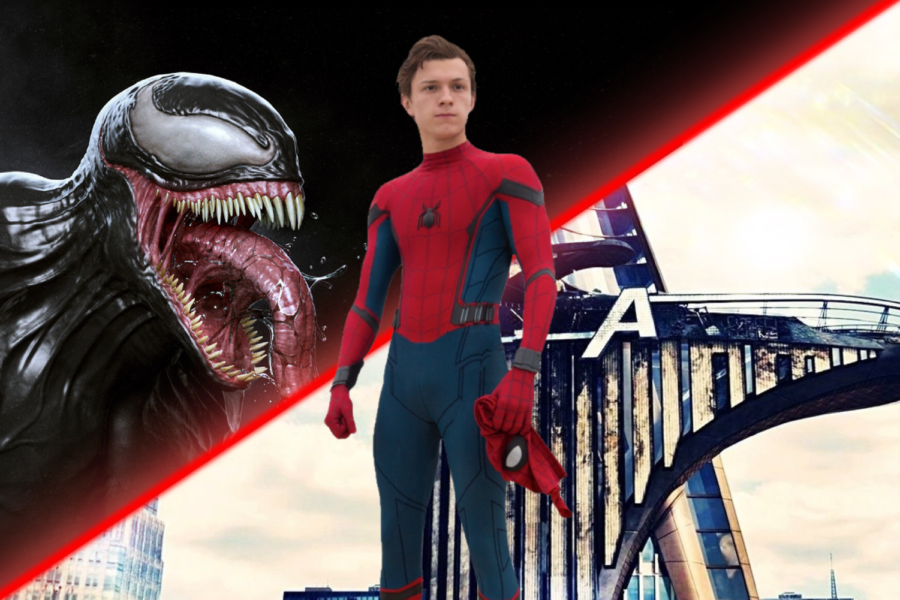 Spider-Man standing between the Sony Universe and the Marvel Universe.

The early Summer high over the release of Spider-Man: Far From Home was quickly overshadowed by the late Summer low of Sony’s termination of its contract with Disney.

The initial contract began in 2015, which gave Marvel the right to use Spider-Man in it’s movies, but reserved Sony’s right to create solo movies. From this deal, fans were able to watch Spider-Man on the big screen alongside other Marvel Cinematic Universe (MCU) characters in Captain America: Civil War, Spider-Man: Homecoming, Avengers: Infinity War, Avengers: Endgame and Spider-Man: Far From Home.

The announcement in August that Disney had requested more benefits to the partnership, ones that Sony refused, devastated fans. Disney was in charge of writing and producing the films so it sought a 50% share in the profit from solo Spider-Man movies, much higher than its current share of 5%. Sony however, paid the entire budget to create the movies, so only making 50% of the profits would be a big difference. The companies could not come to an agreement, causing the contract to end. At that point, Marvel would not be able to use Spider-Man in its movies, and Sony would be unable to use any Marvel character in its upcoming Spider-Man movies.

The sudden termination of such a groundbreaking deal left fans in shock. It also destroyed future movie plans for both companies.

From 2017-2019, Sony released two solo movies featuring Marvel characters as part of its main cast. The plots were aligned with the current Marvel timeline and its characters. If Sony didn’t want to reboot Spider-Man, prematurely killing off arguably the best movie version of Spider-Man, it’d have to throw out giant pieces of Spider-Man’s character development and impactful plot points from the last few movies.

Sony was not the only one losing out after the contract was broken. Marvel massively altered its franchise with Avengers: Endgame. The original Avengers are stepping out of the spotlight to make room for new heroes like Captain Marvel, Black Panther, and Spider-Man. Spider-Man has been expected to fill the giant shoes of Iron Man, in both real life and within the Marvel universe. Losing Spider-Man would mean losing the next main character of the whole franchise.

Likely for these reasons, on the night of September 26, representatives from both companies came to an agreement. Disney will receive 25% of the next solo movie’s profits, but it will also contribute 25% of the cost of production.

Both companies have expressed satisfaction with this plan, and fans have rejoiced. Even Disney CEO Robert Iger tweeted:

This certainly warms my heart! Thank you @Sony!”

As the weeks dragged on it started to seem like the new face of the MCU would be ripped out, and no movie would be able to even explain his disappearance.

The contract guarantees one more Spider-Man movie, but it is unclear how the deal will progress afterward. The untitled movie is set to release on July 16, 2021. We can only cross our fingers and hope this agreement will extend for years to come.