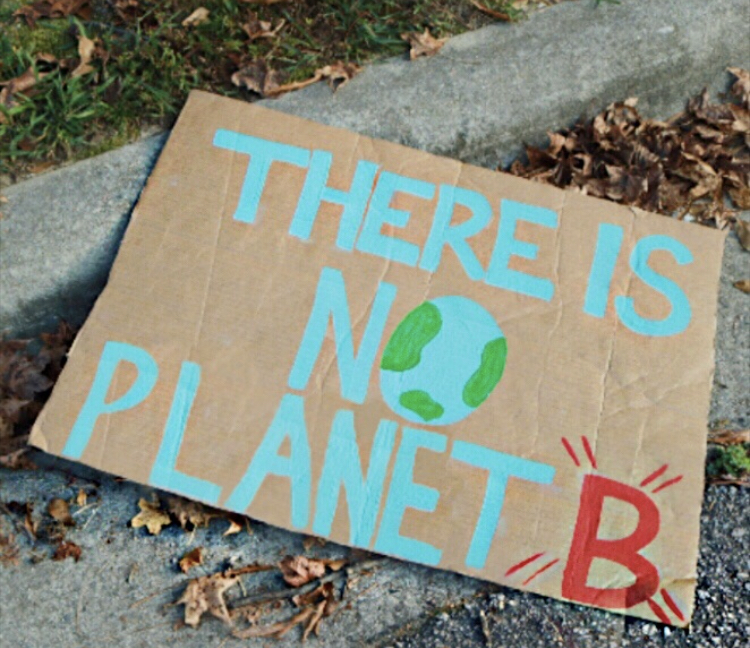 A fallen protest poster at the Raleigh Climate Strike.

On September 20 and 27, millions of teens and young adults in over 150 countries skipped school and advocated for climate justice. The climate strikers took to the streets and urged their governments to make quick decisions that will protect the planet for future generations.

“I didn’t think that young people cared so much,” Williams said. “I’m really proud that people my age are working towards something this important.”

The Global Climate Strike movement began after Greta Thunberg, a 16-year-old Swedish climate activist, protested outside of parliament for three weeks after the election. She then started skipping school every Friday which gained momentum and initiated a project called Fridays for Future. This program continues to give students a safe, civil way to challenge governments.

The first of the two global strikes took place on Sept. 20, with over 4 million people involved. The protest was intentionally planned three days before leaders of the United Nations met in New York City for the 2019 Climate Action Summit. UN leaders were told to come to the summit with specific, structured plans to reduce greenhouse gas emissions by 2050.

Thunberg gave speeches at both the climate summit and the march in Manhattan’s Battery Park. The Manhattan rally was organized by 14-year-old Alexandria Villasenor, where an estimated 300,000 gathered to protest inactive climate laws.

“I’m blown away. [She is] so well thought out for being 16 years old,” Jesse Kenyon, Wakefield science teacher, said. “She’s doing what adults need to be doing.”

The goal of the massive strikes were, and are, to express that the next generation will no longer wait for governments to promote the science of climate change. Thunberg, and the millions she’s inspired will continue to put pressure on governments until climate justice and the safety of future generations are prioritized.

“The primary function is encouraging governments to make changes, instead of just talking about it,” Schug said.

Participants, celebrities and companies alike have been involved in the strikes through social media. Billie Eilish voiced her support on Twitter, Chris Hemsworth and his daughter attended a rally and Patagonia, the popular outdoor brand known for working with environmental activists, closed both their online and physical stores. With over 100 thousand posts featuring  the #globalclimatestrike on Instagram alone, people around the world are continuing to share their pictures, stories and support.

An estimated 7.6 million people total were said to have participated in the hundreds of events that took place between Sept. 20 and 27. Following the two global protests, globalclimatestrike.net calls everyone to keep spreading awareness, information and pressure through social media and participation in local protests, including Fridays for Future.

“It will empower more young people to keep fighting if they see kids their age [involved],” Williams said. “They’ll be more likely to [act].”