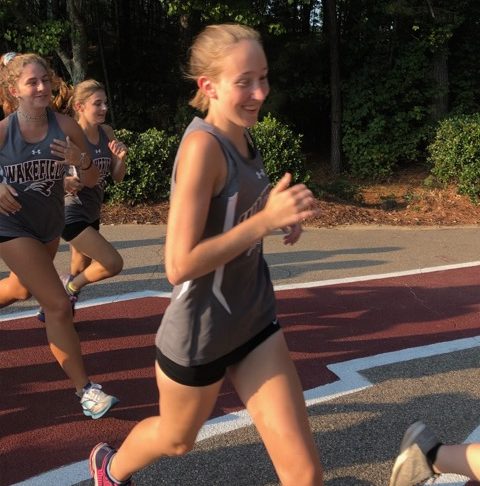 Makenna Castor runs with her teammates.

Makenna competes in cross country at Wakefield and outside of school to train for half marathons. However, running was not her first passion.

“I started out as a volleyball player but I wasn’t very good,” Castor said. “My family decided they wanted to live a healthier life so on Mother’s day, we decided to go run a 5k and I became addicted to running ever since.”

Makenna not only delivers on the track but excels in the classroom as well. She has received “A” honor roll and the Harvard book award just to name a few. At the same time, she is involved in numerous extracurricular activities such as National Honor Society, and received various academic awards and participated in multiple community service projects.

“If you’re going to jump into high school, might as well do it all at once,” Castor said. “If anything, being so involved in academics and sports at the same time makes me a better time manager.”

Castor has built a positive and vibrant atmosphere within the team. As captain, she encourages all of her teammates, as well as organizes runs on the weekends. This season, sophomore Gabriella Turchetti has had the pleasure of being Castors’ teammate.

“I first met Makenna my freshman year and she was instantly someone I admired,” Turchetti said. “She is responsible, driven, diligent and a natural-born leader.”

Coach Joe Turchetti joined the Wakefield cross country team this July. He’s been coaching Castor for about three months and was the one who nominated her for the outstanding award.

“Her leadership skills, tremendous academic achievement and her breakout athletic performance this season made her an obvious choice for the nomination,” Coach Turchetti said.

She continues to contribute to her team in a positive way and motivates her teammates on and off the track. Castor reveals that receiving that award wasn’t only an award for her, but for her team as well. Castor is successful yet humble.

“I wouldn’t have that award if it wasn’t for my team and each of them has made me a better person,” Castor said. “I am so privileged to be a  captain for them and to have them as my teammates.”

Castor hopes to achieve many things in cross country as a senior, but most importantly she hopes to give the cross country team the recognition they deserve.

“The Student-Athlete of the Week award is a really good way to get ourselves acknowledged,” Castor said. “We have come really far and it is only going to get better from here.”