Tethered: The influence and erasure of Black Culture in the Pop world (Part 1) 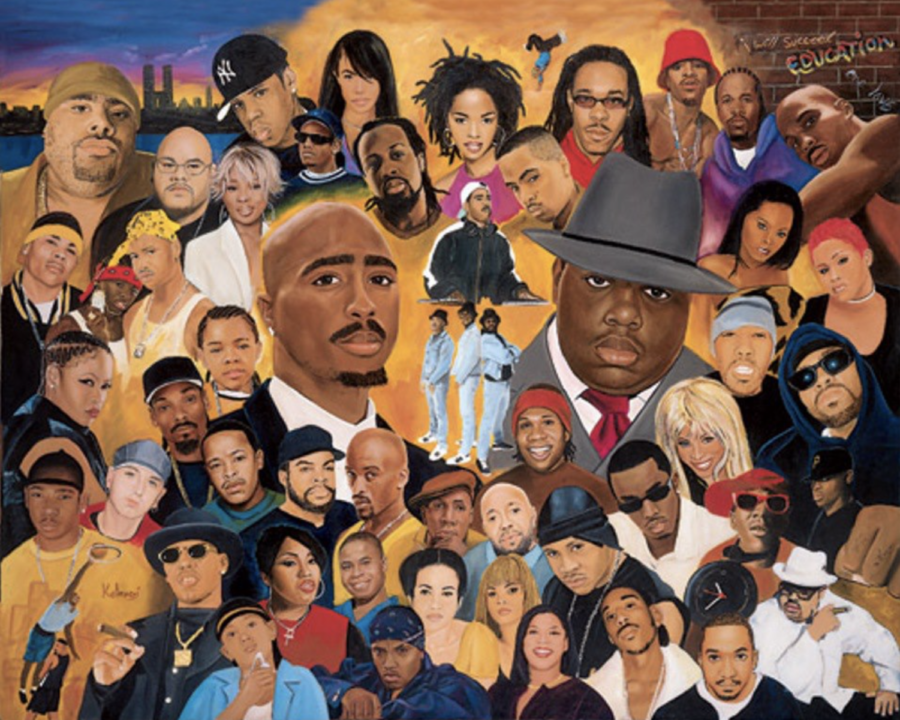 "A people’s history in rhyme" via https://hiphopmatrix.wordpress.com

The erasure of culture has been the vile epitome of transformation when evoking the fruits of the American Dream. However, this erasure is often subdued to a state of thievery. This expropriation is then vehemently transfused into profit as the dominant ‘culture’ allocates its worth to a position of gatekeeper for trends and lifestyle.

Black Culture: the most recognizable and prominent entity that has ingrained a plethora of influence in American history. However, due to slavery and the rise of other racial tensions, black culture has been at the forefront of dissipation. A current of disintegration that has allowed the tears, bated breaths and psychedelic visions of black foremothers and forefathers to be reciprocated, manipulated to the vision of the mainstream.

Black culture has amassed the idiosyncratic ferocity of experimentation since the concept of time. However, it was in times of intense suffering and tribulation that the power of art ensued above all repercussions of a prejudice-stricken society.

African American slaves, who were doused in the debilitating comfort of southern plantations, sought refuge for their inhibitions through song. The fusion of different African cultures and lifestyles cultivated a canvas of different musical compositions. These compositions evolved into the genres of blues, gospel, bluegrass and country. It’s highly speculated that the genre of jazz was created by black people. In fact, they only nurtured the genre to its critical acclaim. Ashlyne Wilson, writer for Kentwired, claims the genre was combined with the traditional New Orleans Black musical styles and creative tangibility of the blues.

Artists, Chuck Berry, Little Richard, “Big Boy” Crudup, Buddy Holly and Big Mama Thornton invigorated the rock ‘n’ roll genre in the 1950s. They set the stage for mainstream non-Hispanic white entertainers, such as the Beatles and Elvis Presley. This success was undermined by the term that defined most black artist of the time, ‘non-marketable’ acts.

Many people in the black culture believe that these same white acts stole music, compositions and lyrics from their Black counterparts. It was after they had done this, that their careers were catapulted to the pedestal of ‘iconic’.

It was in the 1960s where the arousal of the concept of promoting black acts and art to the mainstream was introduced by the record company, Motown. The revered record company housed and distributed the most astounding talent of all time. Jackson 5, Smokey Robinson and Stevie Wonder were all housed under the same roof.

Eugen Shelton, an associate professor in the School of Journalism and Mass Communications at Kent State University, said: “It’s power in numbers.” He further concludes that this was the main deciding factor in the high appeal mainly concerning white artists’ fame in past eras of music. He focuses on the Rock ‘n’ Roll era where Sun Records founder Sam Phillips loved the sound of black music but knew it that it wouldn’t sell to white audiences. He inevitably compromised by finding a white man with a ‘black sound’. The birth of the stupefying entity, Elvis “King of Rock ‘n’ Roll” Presley was born. By some standards, Chuck Berry and Little Richard are the original “Kings of Rock ‘n’ Roll”.

This same disreputably understandable conceptualization seemed to permeate itself at the 2014 Grammys. Rapper, Macklemore, had won the Grammy for Best Rap Album over the predicted winner hip hop artist, Kendrick Lamar. Dedicated savants of the genre thought of this as the start of the degradation to black culture and its hold over hip hop and rap. With the origins of both genres being sewed as the centerpiece of the disc jockey movement in the late ’80s, hip hop and rap have always sought to gingerly suffuse the lessons of black life, from triumphs and struggles, in its roots.

“It’s a matter of economics,” Shelton said. “There are more white people than Black people. There are young consumers who no longer associate this music with African-Americans because it’s coming to them from a white artist. It’s not to say Macklemore is better than Kendrick, but he’s exposed to a much larger crowd to sell more records.”

He continues to aggrandize his point by accentuating the presence of this sentiment had been present in the rap genre before Macklemore.

“I would say Eminem is the Elvis of hip-hop because he is the highest-selling rap artist among thousands of Black rappers,” Shelton said. “And before him, it was Vanilla Ice who had the most successful hip-hop record with ‘Ice, Ice Baby.’ It’s all in the numbers.”

Black artists have been imitated for generations. Today’s white artists wouldn’t have embarked upon their own successes without guidance from African American creatives.

In relation to music, dance was the secondary option to communicate the variant ebullient cultures that seemed to sing songs of desired freedom on plantations. Dance has embellished itself as the universal language cross-culturally with those outside of the black community for another 200 years. Earlier dances like the Lindy Hop and the Charleston were spawning in parts of North Carolina during the 1930s. These dances soon transfused their captivating presences north to Harlem, where they became the effervescent catalyst of the Harlem Renaissance. These dances later ushered in the inclination of more modern dances known as the Electric Slide and the Hustle that aroused lives within the ’70s and ’80s. It didn’t matter the region of people, there was unification that crossed to be adapted by other groups of people.

In all, blacks have influenced jazz, tap-modern dance and hip hop dancing. Current dances like the dougie, nae nae and wobble all identify the strength as a collective the black community has. However, these dances still gain national accreditation after surfacing to mainstream frequencies. Dances often create less controversy due to its universal nature, but it would be ignorant to think there hasn’t been any. In fact, Miley Cyrus caused an outpouring of excitement and heightened tension after her 2013 MTV Video Music Awards performance. For most viewers, she was presenting to the world a new art form, twerking. The word, new, is an overstatement as artists like Beyonce have enriched their concert choreographies with the same provocative motion. It was only at Cyrus’s performance that the dance became a mainstream commodity.

This same event lies within a reflection when referring to Madonna and her signature song, Vogue. The song painted an eloquent depiction of the popular dance style that was created by black and Latino LGBT youth in Harlem during the ’80s. However, the dance style didn’t become a prominent force until Madonna recognized the potential of it and made the song. Some may argue she appropriated the dance for her elevation of career and fame. Others may insist she respectfully gave the community more positive visibility and much-needed stability in a society full of homophobic transgressions.

“She had the eye of white America, which is a bigger audience. Cyrus had more power to influence people who never paid attention to twerking before. Perhaps they didn’t understand it when Beyonce did it, but when Miley does it, she makes it acceptable for everyone to do. It was too black when Beyonce did it. Now it can be a white thing. Most trends, dancing included, mainstream America needs a white person to open the door and say, ‘you can do whatever you want, because this image that we see, makes it acceptable. And, as I said before, there’s power in numbers,” Shelton said.

This alone allows leeway for the mentality of entitlement to seep through the corners of society. This often culminates situations of heightened tension where coined phrases, such as “get over it” are used to expel the relevancy of black voices and influence into oblivion. However, with the combined effort of all people, regardless of background, that we can peacefully coexist and our cultures become reflections of individuality instead pawns for thievery.