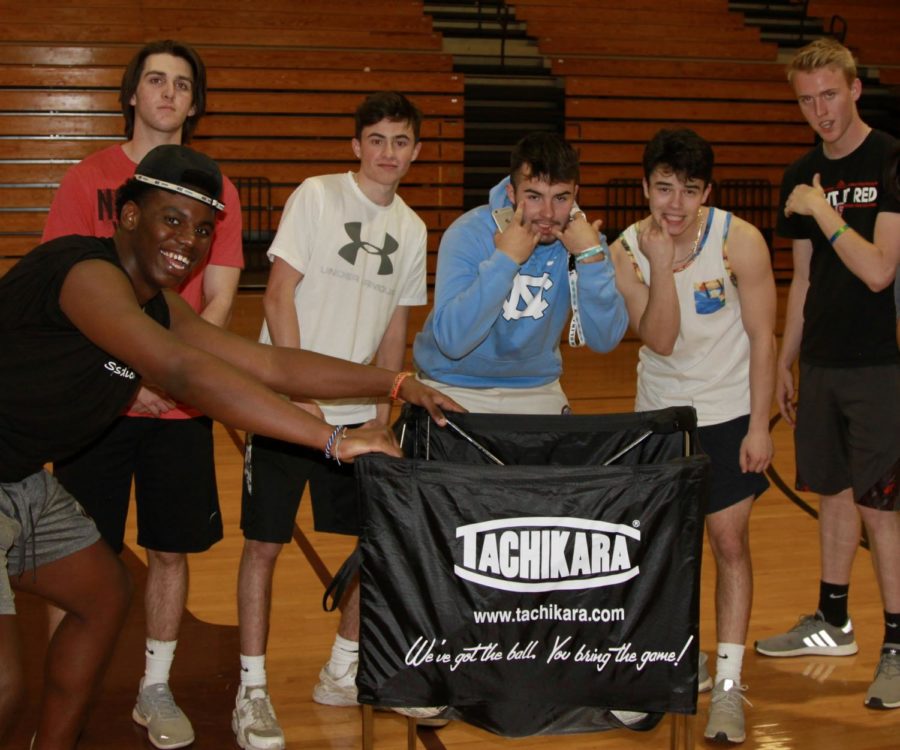 Wakefield hosts its annual Volleybros tournament, a friendly competition between male players. The games are orchestrated by the senior varsity volleyball players who pick teams to compete for the title. Although this is meant to be an innocent pick up game of volleyball, it can get very intense, very quickly.

Timon Edelen is a football athlete during the fall and track athlete during the spring sports season. This year is his first year doing Volleybros and he couldn’t be more excited. He looks forward to having a positive outcome for the senior-junior faceoff on the court.

“I signed up to spend time with my friends for one last fun memory,” Edelen said. “My team’s goal is to win, that’s the only option and I think it will bring us together.”

Kyle Vick is another Wolverine who is active in football and track. He is a senior that is very involved in Wakefield athletics and adding Volleybros to his resume would provide a perfect final touch to cap off his senior year.

“People encouraged me to try out for the team, and I decided it would be fun,” Vick said. “It will bring the senior class together by allowing us to work as a team.”

The teams are decided based who the captains of the women’s varsity team recruit. This year the team leaders include Olivia Watson, Ryan Griffin, Taylin Cain, Jazmine Rosa, Brynn Moore, Ele’sia Williams, Bailey Burgess and Mariso Quainoo. These young ladies are in charge of sign-ups, recruitment, practices, outfit preparation, most importantly: encouragement and support for the guys.

Watson is a vital player during the regular season of volleyball in the Wolverine gym. The energy is sure to carry over for this fun tournament. She is very involved and eager to see the outcome of this year’s teams.

“I signed up for Volleybros to be a captain because not only do I love volleyball, but I think it’s an awesome opportunity to get boys more invested into the sport,” Watson said. “My goals for the team are to have everyone come together as a team and have fun while learning about the sport and be the 2019 volleyball champions.”

Wakefield is a school of opportunity and new ideas. Since the school opened in the year 2000, we have not had a varsity or JV men’s volleyball team. If the school did decide to implement a team, would it be beneficial?

“I am all for having a men’s volleyball team at Wakefield. Many boys can have the opportunity to get scholarships for college through volleyball and it’s another fun sport that men can play,” Watson said.

Senior Ryan Griffin is also a great asset to the women’s volleyball team and plays a big role in the volleybro’s realm. She predicts that this year’s team will provide all the desired energy that the captains want to see throughout the tournament.

“A lot of the guys are very competitive and have always been big supporters of the Wakefield varsity volleyball team. My goals are to increase friendly competition between the juniors and seniors, and bring my team to victory,” Griffin said.

The 2019 class have various activities that are meant to bring everyone together for their last year of high school. Volleybros is often overlooked but could be seen as another gateway to make memories with our peers.

“I do believe that Volleybros will bring the senior class together because of the competitive atmosphere the boys will be in. I have confidence that many will make Volleybros a fun event to participate in,” Griffin said.

Even though it is only year two, the outlook for this event is very hopeful for many years to come. The dedication from both the players and the captains is very apparent and very important to the success of the program. So, save your regular season volleyball tickets to watch Wakefield’s finest men play a competitive game on April 12th. Tickets are $3 and all proceeds are donated to Saving Grace Animal Shelter. It is sure to be something you don’t want to miss.

“I think it would be a good consideration to implement a boys volleyball team here at Wakefield,” Griffin said. “Boys get very excited about volleyball, and are strong enough to handle what it takes to become a real volleyball player.”