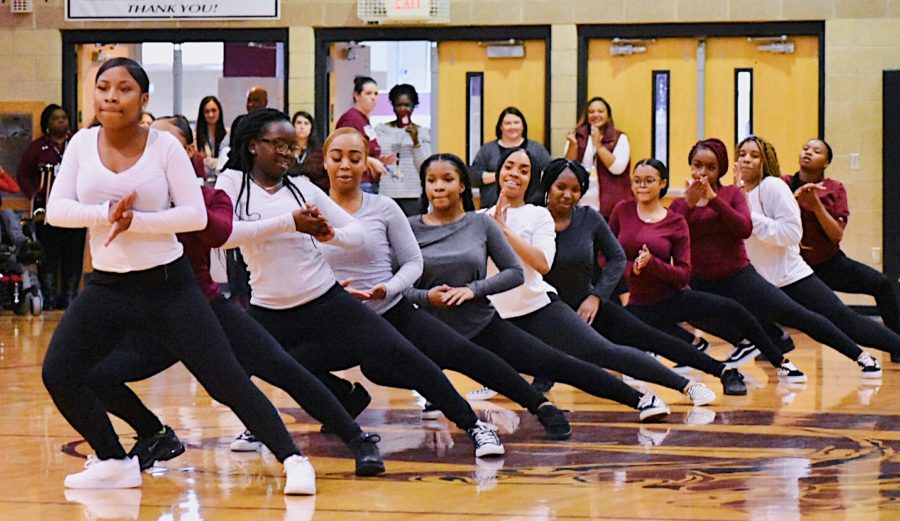 The resurgence of creative pioneers in Wakefield High has granted leeway for the newest association of fortification and artistic expression, The new and improved step team.

The ferocity of this group was felt as they debuted at the pep rally last Tuesday. With steps that portrayed the sheer eloquence of this dance form, the team permeated through barriers that kept all who watched on their feet.

“I did step team when I was in elementary school, so step has always been a part of me,” Co-Creator Mercy Muthee said. “Tiara Jordan and I actually had the idea for step team last year around October. I thought it would be so fun and different too because Wakefield doesn’t have anything like this.”

Jordan and Muthee had concise visions of how they wanted to see their club rectified onto campus, but the surmised power of the application process withstood their robust ambitions.

“Our paperwork actually didn’t go through right away,” Jordan said. “Even on top of that, we had a lot going on in our personal lives. Of course, we continuously talked about it, but there was stuff I had to go to after school and Mercy had multiple clubs she was participating in. After a while, we didn’t take a strong approach to it anymore. However, the paperwork finally went through in January and all of a sudden we existed. It caught us by surprise. It was a process, but we’re finally here.”

Science teacher, Doreene McGill, rose to the occasion and came to the aid of the girls as being their advisor. Being a part of sorority Delta Sigma Theta, Inc. McGill was able to enrich each of the members with an immense amount of experience that challenged their artistic apparitions and the overall conviction of the team. In its final form, this guidance stapled the squad as a force of earnestness that couldn’t be denied a voice to speak.

“ I was asked by several students last semester to become the advisor for the team,” McGill said. “I was taken aback when I found out that it was established back in January because I thought it was going to have to wait till next year. After it was established, it opened up the opportunity for the girls and myself. We were asked by Ms.Chambliss to prepare something for the HBCU expo that is coming up. Then we were asked by the dance teacher, Ms.Plant, to premiere ourselves at the pep rally, and that’s what we ultimately did. We practiced every day leading up to it. It was hard work, but the girls were excited for it.”

This voice that was created boasted from the lustrous rhythms that spread from elated feet. The undeniable candor of this natural music can only spark wonderment to how much differentiation stepping has when compared to other dance forms.

Math teacher, Felisa Kelly, distributed her recollection of how step helped her release the tension of emotion from anger to fun while she gained experience from Delta Sigma Theta, Inc. as well.

“It’s creative expression. It’s just another way of expressing yourself,” Kelly said. “It’s like someone might express themselves with words, but you’re expressing yourself with steps. Sometimes it’s a moment of you’re just getting out your anger. It’s a nonverbal way of artistic proclamation.”

Jordan then relished on the freedom that stepping insinuates for herself and others on the team. It spreads an infatuation that provides clarity to the individuality formed between each member and the overall powerhouse a team of this stature possesses.

“It’s a different approach than a dance team or a cheerleading squad,” Jordan said. “When creating steps, it’s more so what you like to hear. It’s usually a matter of if the beat sounds good or not. It typically flows from one person to the other, until we have a cohesive ideal sound. I know it may sound weird and people might say ‘oh you’re just stomping on the ground’, but you’re making a sound, you’re making music. You can express yourself in more than one way when you step.”

The cohesiveness of this coalition of young students constructed a barrier of effectiveness. The type of effectiveness that questioned the barriers that surrounded the school concerning race and gender. Would this ingenuity finally destroy the stigma of a step team being just for black people or just for girls that seems to disappear in college?

“I don’t think the stigma disappears in college,” Kelly said. “I think that when you’re younger, kids feel like they have more to offer. Over the years, I feel that stepping in colleges has faded away because it used to be a big thing in fraternity and sororities a long time ago. It wasn’t so much in elementary, middle and high school as it is now. It’s becoming a big thing now in younger grades than it is in colleges.”

Muthee reflected on how the reaction felt by the school was surprising, yet encouraging. A light that could further start the deterioration of the stigma.

“I expected the black student body to support us and encourage us, but we received more support from the white student body. They engaged in what we were trying to do. They were in their classes trying to learn our steps,” Muthee said. “On the other hand, the black students were very critical. They kept saying ‘oh, we need to do this better’, ‘this girl doesn’t have the same amount energy.’ On the gender aspect of the situation, we’ve been trying to get boys to join, but they’re so worried about what their friends are going to think. This is understandable because we’re in high school. However, if one boy joins, then a whole bunch are going to follow. We are trying to find that one boy to be confident enough to join and then others can come in.”

With the atmosphere of the school is now starting to settle on this dynamic of acceptance, we look further into how this cultivates a safe space, especially for young black girls, to express themselves without being stereotyped.

“This is a safe space for black girls to express themselves without being stereotyped,” McGill said. “ When I did the intro meeting for the team, we talked about being leaders, because a lot of students on the team are stereotyped by teachers and their peers. I want to make this a mentoring program for a lot of the young ladies on the team. We are going to incorporate talks about energy and self-esteem. So with that, we are going to talk about how young ladies should act and conduct themselves. I think that when you are talking about stereotypes a lot of time those things come into play. We are going to talk about stereotypes as being African Americans. That they are going to be looked at differently and for them to be positive when encountering trials like these.”

As these young black women embark on a true journey of enlightenment, creatively and spiritually, a bond is manifested between each of them that sends them further on the path of sisterhood. A pact that allows harmonies of step to synch with genuine love, connections, and adornment.

The rapid affirmation that the step team has achieved sets itself as precedence and as the blueprint for all clubs in the future of Wakefield that further strengthen the foundation of equity and equality within the atmosphere of the school.

“For the future, I hope the step team becomes bigger. It doesn’t have to be one race or gender on everything,” Jordan said. “That’s why step team is open to everyone. I just want it to have a lot of people just getting along. It’s just something to have fun with and enjoy the people around. It’s just overall something different.”