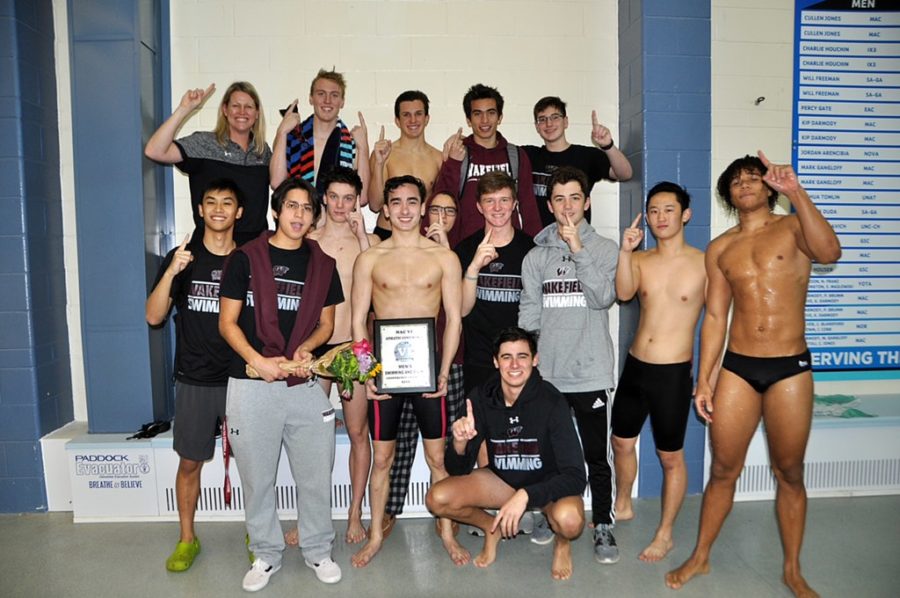 The men’s swim team has made Wakefield High School history by placing first at the conference meet. Respectively, the women’s team won second place in the conference. Both teams were ecstatic about their standings. This accomplishment is especially impressive because it’s the first time in the program’s history that they’ve won the championship.

“Our men’s team won the conference meet this year because of their talent and hard work,” Wainio said. “The men’s team was pretty close to winning this title last year, and I believe that made them more hungry this season.”

“Coach is very nice,” Elms said. “She doesn’t put up with a lot of stuff. She is super encouraging.”

Senior Taye Brown has been swimming since he was five years old. He has been on multiple swim teams in the past. Coaches have inspired him to join a year-round team. The sprint event swimmer has competed for the Wolverines all four years of high school. Brown is an ECU signee; additionally, he hopes to compete in the Olympics one day.

“Coach Wainio pulled us through. She pushed us at practice to get better,” Lav said. “We started slowly, but gained points every meet.”

The students show their dedication to the team, with the help of Coach Wainio and upperclassmen. In years past, the swim team has been close to taking the Conference Championship but came up short. Wainio is proud of how the team has progressed.

“The upperclassmen help the underclassmen primarily by being good role-models, and showing the younger athletes exactly what they should be doing at practices and meets,” Wainio said. “Our team is a family of sorts, and I heavily rely on the upperclassmen to take the initiative and lead.  We have 15 seniors this season and each one played their part in helping this team.”

Although swimming is an individual sport, it’s important to build a strong team connection. Alexis Hernandez has made it her personal goal next year to get faster.

“My favorite moment is definitely the swim meets. We all warm up and get together to do a big cheer,” Hernandez said. “ It’s super fun because the team all comes together as one. No matter how fast or slow you are.”

The swim team looks forward to their energy carrying over into a new season to bring Wakefield a second conference championship. The team has accomplished so much in the winter season and is looking forward to competing in regionals and maybe states.

“We have 14 swimmers moving on to the Regional swim meet [February 2nd] and the top 8 at regionals will advance to the State meet on February 7th,” Wainio said. “I’m very excited to see what these swimmers can do, and I am proud of their accomplishments this season.”