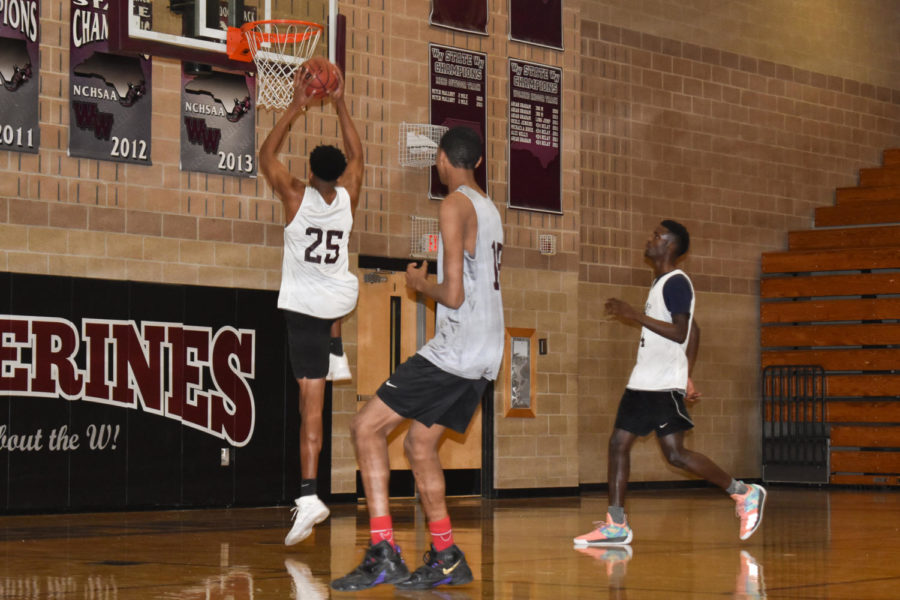 Wakefield Boys Varsity Basketball team, consisting of 7 seniors and 8 juniors, have proven their dominance with a 19-3 record in regular season, which manifested into being 7-1 in the conference. The starting lineup for the Wolverines comprises of Trae Smith, Darrius Everett, Ja’Ques Shields, Vernon Fraley and Elijah Shabazz.

Senior Trae Smith is a valuable asset to the team with varsity experience since his sophomore year of high school and reaching his 1,000 point mark earlier in the season.

“We just try and not worry about the last game and keep pushing forward, worry about what is happening next so we always prepare for the next game,” Smith said.

He continues to strive for new accomplishments throughout the rest of the season, along with looking forward to future games instead of lingering on the past games.

“It’s great to be 3-0, definitely a confidence boost and it helps us throughout the season to hopefully keep winning and win conference,” Smith said on the Wolverines being undefeated in the slightly competitive conference.

Along with having a great team of individual players, it also important for the coaching staff to possess positive characteristics. The men’s basketball team relies heavily on their staff to present a winning atmosphere.

Assistant Coach Trent Wilson Sr. continues to have high hopes for the team as he enters another season of being not only a coach but a mentor for the Wolverines.

“The first goal is to win the conference and then from there get into the playoffs, which we should be fine in the playoffs and then take it a game at a time and hopefully on March 16th we will be cutting the nets down and celebrating the ‘W’,” Wilson said as he articulates his team goals for the rest of the season.

March 16 refers to the day that the Wolverines plan to play and win the state championship. The Wolverines have not earned the state title since the 2005-2006 season, resulting in a main priority for the team.

“We are ranked pretty high, so we know we are going to get every team’s best shot,” Wilson said. “We have the physical tools to beat anybody in the state, but it’s a mental aspect of whether we are going to dial in and do it collectively.”

Senior guard Nyeem Smiley plays a dedicated role in making key plays during games as well as providing motivation for the team.

“Play as a team; don’t be selfish,” Smiley said. “Create for others instead of creating for yourself all the time is key to winning.”

When describing the type of relationship he has with his fellow teammates, Smiley acknowledges the years of experience with the same individuals and the importance of that connection.

“I’ve known some of these people for four or five years now so we have a good brotherly connection,” Smiley said.

Embracing his junior year, forward Vernon Fraley displayed early his natural talent for the game. Since his freshman year, Fraley has been part of the varsity team and has built relationships.

“It’s a strong connection,” Fraley said. “We have been playing since we have been in middle school so I have known them for a long time…it’s like a family”

At the rate of which the Wolverines are performing, the goal of being conference champs and state champs is no longer unobtainable. The ingredients of a successful squad are present, regardless of the records that are acquired. Fraley is focused on what it will take to complete this task.

“Just to be focused and try to do what you can to win,” Fraley said.  “Probably the main one for me is to have fun.”