Why is our pro-veteran president against serving? 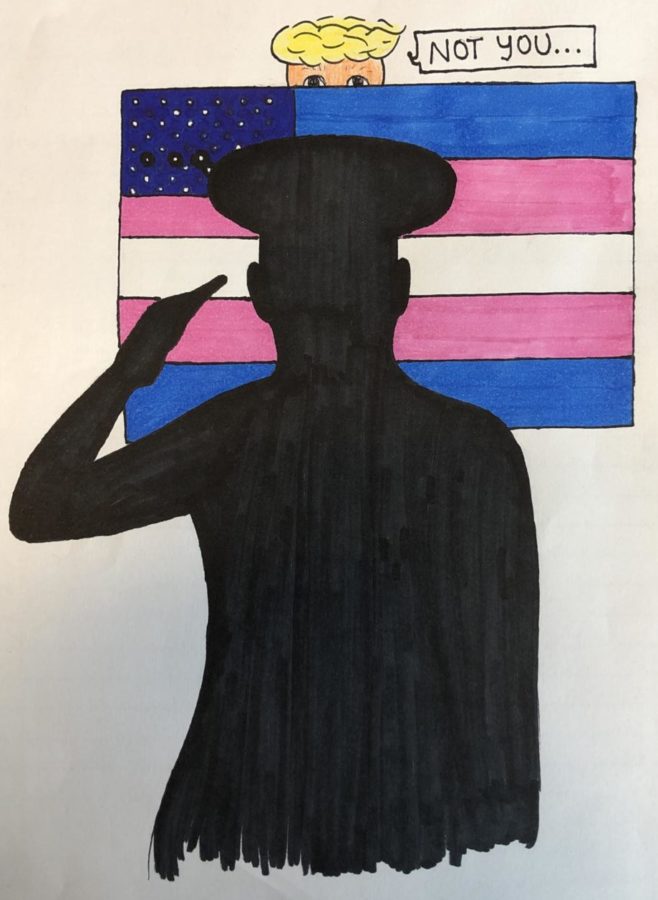 As of January 22, 2019, the United States Supreme Court ruled that transgender people are not eligible to join the U.S. military. The policy was originally announced last year in July from the President via his twitter account in the span of three consecutive posts: “After consultation with my Generals and military experts, please be advised that the United States Government will not accept or allow… Transgender individuals to serve in any capacity in the U.S. Military. Our military must be focused on decisive and overwhelming… victory and cannot be burdened with the tremendous medical costs and disruption that transgender in the military would entail. Thank you.”

National tensions have increased since Judge Kavanaugh joined the Supreme Court on October 6 of 2018 as one of the most controversial Supreme Court Justice nominees in history, due to the slew of sexual assault allegations that were filed against him. Kavanaugh, nominated by President Trump, is a conservative-leaning judge. With him on the Justice roster, the most powerful court in the United States is now officially right-winged. The current situation with the majority-conservative court puts recent Supreme Court rulings such as Roe v. Wade at risk of being pulled back. This is what also caused the five-four ruling that ultimately condemned transgender people from serving their country.

What is the logic behind the ban? As a president who claims to value the U.S. military and honor its veterans, wouldn’t it make sense to recruit as many people as possible into the military? Donald J. Trump’s logic behind the ban is that gender dysphoria (which used to be referred to as gender identity disorder until it was changed in a newer edition of the Diagnostic and Statistical Manual of Mental Disorders) makes a recruit unfit for service. Another part of the excuse behind the ban is that the military pays for transgender people’s sex reassignment surgeries. However, this is an over-exaggerated situation. “Based on data from surveys and private health insurance claims, less than 2% of those trans service members will seek medical transition which has the potential to disrupt their ability to serve.” That’s a tiny number of people, due to the minuscule population of transgender people in the military. If the president is so concerned with the amount of money the Department of Defense is spending on healthcare for transgender recruits, perhaps he should express some outrage towards the even larger stack of money being spent on Viagra. “According to data from the Defense Health Agency, DoD actually spent $41.6 million on Viagra — and $84.24 million total on erectile dysfunction prescriptions — last year.” The Department of Defense’s budget of $50 billion directed $8.4 million to transition-relative healthcare. The comparison of how much the government will spend on unnecessary erectile dysfunction over important healthcare for its servicemen and servicewomen is completely ridiculous. Gender dysphoria is more important than erectile dysfunction.

Trump has repeatedly failed the LGBT community throughout his administration, despite his claims during his campaign in 2016. In a tweet on June 14, 2016, he said “Thank you to the LGBT community! I will fight for you while Hillary brings in more people that will threaten your freedoms and beliefs.” Over two years later, he has only made a mockery of the LGBT progression that prospered during the Obama administration. By banning all transgender people from the military, he is blatantly discriminating against a population that is proudly trying to serve their country.

His logic behind the ban is deeply flawed. Transgender people are not automatically unfit for service just for being transgender. They have every capability cisgender people have, yet are being subjected to such unfair treatment by an administration that is failing to respect American citizens. The ban is a poor excuse to continue this belabored attack on LGBT rights and has no place in America.