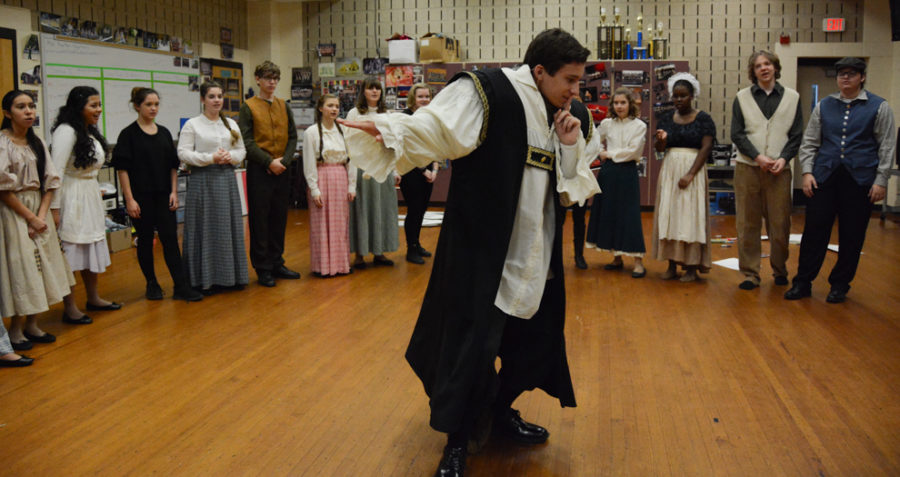 Lights, Camera, Action! The last rouge rose petal fell from its green stem Saturday, December 1, 2018 , at Wakefield Theatre Company’s final performance of Beauty and The Beast. Cast and musicians encapsulated the story’s theme of the sensuality of love, growth and acceptance through rhythms, notes and perfect portrayals of characters in the story.

It was the moment when each cast member took their final bows that the feeling of relief had rippled through the perimeter of the theatre. All of their sweat and tears had boiled down to one moment of groundbreaking adoration.

“At most, each person puts in about 100 hours by the end of the production period,” Senior Nate Richardson, who starred in the show as The Beast, said.

Time spent at this magnitude is expected from a coalition of people who brought in 200 plus attendees every night. However, it calls wonderment to what is focused on during this time of trial and error: the rehearsal period.

During the rehearsal period, a plethora of components were insinuated into creating the final extravaganza of a full-fledged production. Principle characters, such as Belle, Gaston and Beast tend to focus more on their character development and hitting the right notes. Members of the ensemble take on many roles and focus on big spectacles of choreography that livens up each scene with flare. All of this correlates with the requisite to be exceptional come show time. Director, Paul Orsett, challenges each actor to become limitless.

“To me, in educational theatre, the importance of the rehearsal period is to give an opportunity for the actors, who are playing the different character roles, to discover and search for things within themselves as well as things they think reflect the character,” Orsett said. “Also to be able to work on those things with other cast members to create a viable relationship between the two or more characters on stage. You build relationships with everybody. It’s about really digging into how you respond and talk to each other and what those relationships that give you the opportunity to try different things as you rehearse. Some things work and some things don’t. Other things you change around to make it as believable as possible.”

Though the numerous hours of rehearsal and preparation were housed within the theatre itself, all of the actors had to take time out of their own personal schedules to really gain the fundamental principle of their characters, and which risks they were going to take to be able to put their best foot forward.

“I ran my lines as often as possible,” Amani Bushiri, the star of the show who portrayed Belle, said. “I ran scenes with other people. I kind of did a character study, and watched different people play Belle.”

However, there is one barrier that takes absolute precedence before production can begin…auditions. Over a two week period, an accumulation of diverse talented students locate themselves inside the theatre to compete for the biggest roles of the show. However, the process allows a force of fierce temptation to override in each of them to see who they could be possibly working with and how hard they will have to work for their proper recognition and debut.

“I just got overwhelmed with excitement. I was so happy and everyone else was happy for me,” Blake Rose (Gaston) said. “At that moment I knew, the role just clicked. There was challenge, however, I don’t usually have a deep voice, and so I had to adapt it a bit. I had to work on that most. That was a great milestone and great work ethic in my acting skills that I could see myself doing.”

Bushiri then emphasized her point of how much the character of Belle spawned enlightenment within herself.

“I was excited when I first heard of my role. It’s my first time being a lead role in a high school production,” Bushiri said. “ I was elated to be able to take on that challenge. Belle was a little more quieter than I am. She’s more reserved, so I kind of had to subdue that side of me. However she is a multi-dimensional character, so that was fun to play.”

Richardson celebrated the achievement of obtaining the very dynamic role of The Beast.

“I saw it and stumbled back just a little bit,” Richardson said. “ I was really excited because this was my big break. Honestly, no matter what I got I was going to be excited to be able to portray it.”

To receive roles of this stature, decisions had to be formed. While being the director of blocking and acting, Orsett also acts as a casting director. He bases his decisions off of two very potent theatre customs, the first is seniority (who’s been there longest and has put in the amount of work needed in recent shows), and the second is talent/who fits the role best. It takes him days on end to solidify his decisions on paper. Of course, there’s always wounded feelings and broad smiles that flaunt themselves upon the first reveal.

“No matter what you’re cast as, work as hard as you can in that role,” Bushiri said. “Show your commitment to the show, and do your best during auditions. Be prepared, be enthusiastic during the rehearsal process as well.”

Wakefield Theatre Company worked relentlessly to encounter dignified success, but two weeks of viable rehearsal time had been abruptly ceased due to hurricanes Michael and Florence. By the time rehearsal had commenced again, they were in overdrive. However, the annual winter flu wasn’t done with them yet. It had caused two principal characters to be out of multiple rehearsals, which set back production temporarily. But with fill-ins, hard work, talent and dedication the company was able to achieve a record box office success. The auditorium was filled every night with jubilant friends, families and supporters who summoned all of their deepest emotions and applauded for the colorful arrays of characters, sets and overall talent.

Along with becoming characters of the story, there is a transformation of becoming characters of love and humility. There is a family dynamic between cast members, crew members and the director. Every rehearsal that passed, their support for each other strengthened. Their need to be together became a necessity for a lifetime. They’ll go on cherishing memories that will forever ring in joy.

“In my eyes, there isn’t a divide between theatre and athletics,” Rose said. “In my lifetime, I’ve done both. Going to a show is a lot like going to a football game. You have to put in the same work, the same dedication, but in a different way. The divide seems big, however, it’s actually pretty small.”