The urge to dominate fuels the Wakefield Women’s basketball team 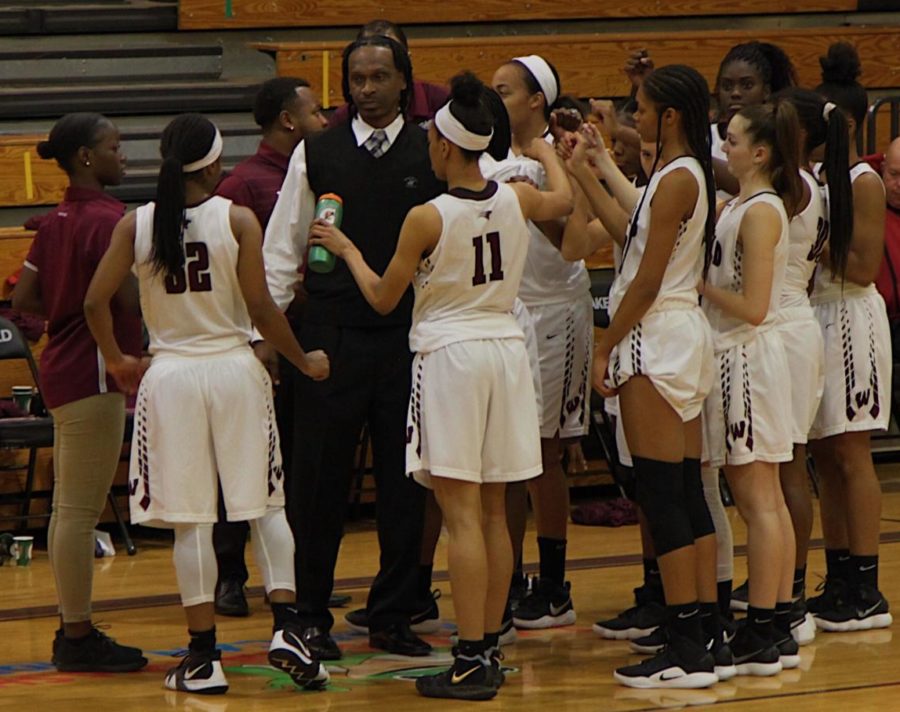 The women's varsity team huddles up before beginning their game.

Following the best season the team has had since 2008, the Wakefield Women’s varsity basketball team has their eyes set on the conference and state championship. With a current 3-0 record, the team is working towards continuous success.

Sophomore transfer, Amirah Allen, has made an immediate impact on the court. Allen is averaging 3.7 points per game and 2.3 rebounds per game. However, as a newcomer, she didn’t know what to expect when she first got on the team.

“I was nervous when I first got around the girls,” Allen said. “But they are really nice people and made the adjustment of going to a new school easy for me”.

Head Coach, Donald Williams, has much experience within the game of basketball. He won a national championship as a member of the UNC tar heels, where he was coached by the legendary Dean Smith, and he also played professionally. With a 21-7 record and winning the NAC 6 conference Coach of the Year award during his first year of coaching this team, Coach Williams still has bigger goals.

“We are taking it day by day right now but I believe that we can win the conference championship and make a deep run in the state playoffs,” Williams said. “We have a strong senior class who know what they want and they’re hungry.”

Co-captain, Peris Pavlinac is a part of the senior class and has started on the varsity team since she was a freshman. This season, Pavlinac is averaging 11.7 points per game and 3.7 steals per game.

“My approach to every game is to do what I have to in order to help my team win,” Pavlinac said. “I have worked hard on developing my shot and building up my confidence as a shooter in order to continue to contribute to my team.”

Coach Williams’s philosophy as a coach is to bring out the best in his team every game, and not to focus on his opponents.

“As a coach, I never focus on my opponents in my game plan,” Williams said. “I believe that if we do what we are supposed to do then nobody can stop us besides ourselves.”

Senior co-captain and University of Illinois commit, Jada Peebles, has been the leading scorer on the team since her freshman year. With all of the accolades and recognition she has received, she remains focused and feels no pressure.

“We are the team that everybody doubts,” Peebles said. “I don’t believe we have any pressure. We just have to continue to work hard every day to get better”.

To have a basketball savant as your head coach means a lot to Peebles. She doesn’t take it for granted and understand that listening will be key to the team’s success.

“Just having a coach that loves and knows the game makes things much easier,” Peebles said. “He knows what we need to do to win and as long as we listen, hopefully, we will continue to win.”

Williams has had great coaching and mentorship in his own life, and he hopes to carry these lessons on to his team.

“I just want them to remember to never be complacent,” Williams said. “You can always improve on and off the court, so I hope that they always push themselves to be better.”

The goal in mind is simple for the Lady Wolverines. To win a state championship. Opposing teams should beware of the edgy and motivated group.

“I want to win a state championship very badly,” Peebles said. “That is our motivation on a daily basis. That is what we work so hard for.”