Marching band looks back on a triumphant season 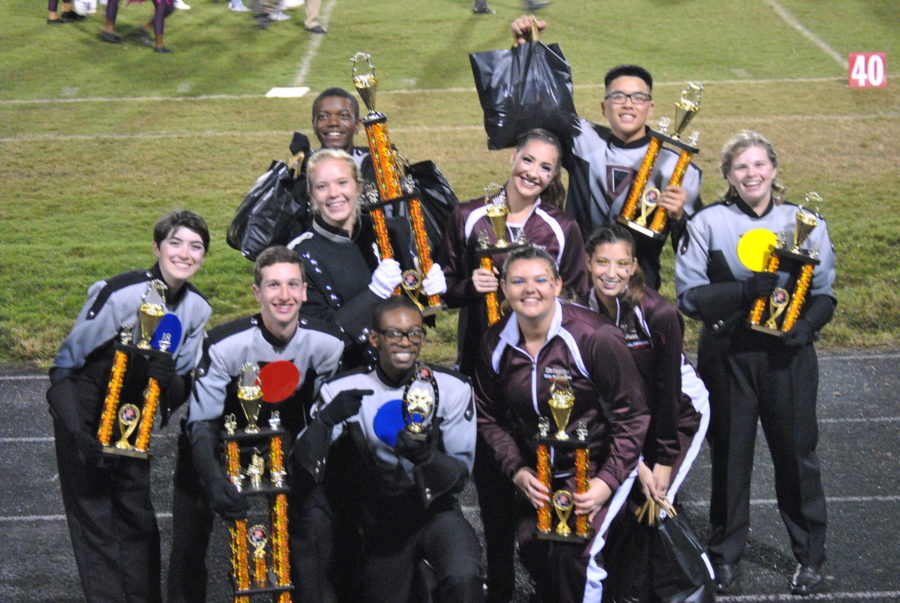 Wakefield High School boasts a marching band that consistently performs their best. This season the band won the Reserved Grand Champion award twice; a feat that has not been obtained by Wakefield in years.

“There was a very positive attitude, even towards the end of the season,” Junior, Katie Summers, said. “This year was the best I’ve ever seen us, energy-wise, and I’m very proud of that.”

Band is a busy and challenging program to be a part of; it requires time, energy, perseverance, and above all else, teamwork. As much time as these musicians spend practicing and perfecting their instrument, they spend even more time learning how to harmoniously pull off their show as a team.

“Band is a team effort; if one person is not doing their role, it hurts everyone else,” Brian Munoz, Band Director, said. “Unlike most sports teams, you don’t have a ‘bench.’ Everyone participates all the time.”

Marching band spends countless hours every week, and over the summer they master each of their different performances. They pay special attention to visuals, marching technique and intonation, which correlates with volume and tuning. The bigger bands are able to make larger impacts with their music. This is why, at only 60 members, good intonation is a key factor for Wakefield’s marching band to sound loud.

They worked hard, and they won first place in their class at all but one of their competitions this season. Their best overall score this season was an 88 out of 100, an improvement of about 20 to 25 points since the beginning of the season.

“Breaking a 90 is hard to do; few people make it to that point,” Munoz said.

These achievements were difficult due to the setbacks band encountered. About a week was subtracted from Band Camp’s time this year, and weather obstacles such as hurricanes Florence and Michael didn’t help to make up for the lost practice. Another change includes the absence of the color guard class, which means they only got practice time

outside of school hours this year. This made it difficult for them to find time to practice alongside the band. Overall, they made the most of the time that they had to practice, and earned themselves a very successful season.

There is more to band than practice, intonation and memorization. A family is established in their fourth period class; from Music Camp to the last performance of the year, they are constantly building relationships and becoming closer.

“[Band] has given me a lot of great friends and experiences. I encourage everyone to do it,” Lanna Bruce, Sophomore, said.

Through the rest of the year, band students will be working on musical performances for events such as holiday parades, the Thanksgiving Skinny Turkey Race, the school musical, the winter musical and a New York trip that they plan to go on in the spring.

“The different experiences teach us to be good adults and members of society,” Senior, Gabrielle Schuh, said. “[Band] taught me what I want in life,”