What is Marketable in the Cis World? 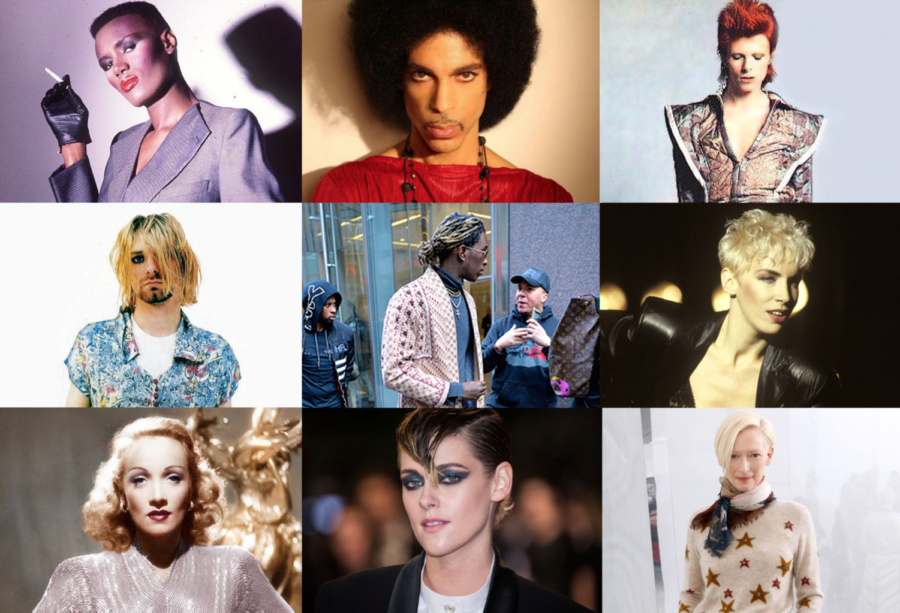 Cis, Short for cis-gendered, meaning someone who identifies with the sex they were born as. With that being said, What is marketable in the cis world? Boys wear blue and girls wear pink. Watch our young men devour the tantalizing seduction of hyper-masculinity. Allow our young women to dance and prance through the prickly field of the debilitating delicacy we call hyper-femininity. Force our children, from birth, to capitulate themselves into this tableau of the tired “straight and narrow.” Or is it that we deplore the psychedelic light in a child’s eyes that insinuates deviance? The same deviance that transforms them into all-star aliens reaching their peaks with societal ideals. These peaks enticing the disintegration of the very toxic adjectives: masculine and feminine. However, who can these children look up to when the world has slammed the door in their faces?

Androgyny or being androgynous can be described as the combination of masculine and feminine characteristics. It is usually used to describe characters or people who have no specific gender. Gender ambiguity may also be found in fashion, gender identity, sexual identity, or sexual lifestyle. Within the entertainment industry, there have been a handful of pioneers who’ve paved the way with their gender-bending mystiques to culminate a flare of revamping that has often transpired war. The war that manifested controversy, pain and praise.

Grace Jones
“The ambiguity of her act is that she herself looked like a man.” These spoken words of infatuation written by Jean Paul-Goude bring the surrealism to how twisted we are to Jones’s presence. Her ability to sow the fruits of her seamless segue of energy from provocative feminine tension to warmly overwhelming masculinity has offered the most seditious portfolio of art of all time. The Jamaican actress, model, and singer with an intimidating flat top and ravishing dark chocolate skin has become one of the most revered entertainers and LGBT icons. Each day of her life she evades fierce reveries of womanhood. “ I was outside of race and gender,” Jones said in her 2015 memoirs. “I considered myself energy that had not been classified.”

Prince
The formal eradication of putrid masculinity seemed to preside as a mainstream tendency when Prince avowed the musical throne. He cemented his staple of scintillating individuality with the sway of his silk pressed hair, along with the peppered strut and clack of six-inch heels that would enchant a crowd of women, but enrage a pit of “straight” men. He fortified the music industry while dancing through the purple rain. “I’m not a woman. I’m not a man. I am something that you’ll never understand,” Prince said. This idea catapulted a lifelong duty for him: push queerness and androgyny into the pop culture limelight.

David Bowie
The flame-haired, lighting-struck pop god became a definitive entity within fashion, gender independence and live performance. Materializing with a fury rouge mullet in a decorated leotard or achieving slick chic with a smooth satin suit and swept back hair, Bowie broke barriers that heaved doors open for performers of the silenced nation. “I really wanted, more than anything else, to contribute some in a way to the culture I was living in,” Bowie said in 2002.

Young Thug
“I feel like there’s no such thing as gender.” Being one of the more “underrated” and modern creations of the Androgyny Movement, Young Thug has defaced all masculine deformities in the rap community. With the weight of homophobic and hyper-masculine men and women alike, he further ostracized himself by posing in a dress for his album cover No, My Name is Jeffery. “In my world of course, it don’t matter,” Young Thug said. “You could be a gangster with a dress, you could be a gangster with baggy pants.”

Kurt Cobain
“There’s nothing more comfortable than a cozy flower pattern.” Cobain revolutionized these words for The Face in 1993. What came to fruition for the gray, stagnant world was a man. A man that was part human, part kaleidoscopic supernatural occurrence. Cobain challenged norms and conformities that have rooted as being succubus for life. Winning this war by wearing ball gowns to award shows, and taking on the aspect of being openly feminist. Dawning the crown as godfather of grunge, Cobain demeaned anyone who took issue with his choices.

Annie Lennox
The seductress of androgyny made her first effervescent semblance in her music video ‘Sweet Dreams(Are Made of this)’ with bandmate David A. Stewart in the ’80s. She categorized her appearance as warped shapeshifter by inducing the audience with a tangerine pixie cut and a conventional masculine suit. While also keeping her feminine mystique with red lipstick and blush. “Women have been wearing men’s clothes for centuries,” Lennox said. “It’s a powerful thing when a woman wears something less feminine. It’s saying, you just look at me slightly differently, I’m not just your sexual object for you.” Lennox took the androgyny persuasion to immaculate proportions when she emerged at the 1984 Grammys in drag (dressed as Elvis). Lennox’s apparition can continue to be felt through power dress tailoring and overall drive on stage.

Marlene Dietrich
One of the pioneers of the androgyny tempestade in the ’30s, Marlene Dietrich patented the black tux when she attended her 1932 movie premiere. “I am sincere in my preference for my men’s clothes- I do not wear them to be sensational,” she said. Dietrich allured Hollywood into a fluorescent recoil of uproar. These waves of paramount education have allowed Dietrich to be eulogized for breaking gender norms and becoming a prominent legend. “I think I am much more alluring in these clothes.”

Kristen Stewart
The Twilight Saga siren has retired her brown mane and dawned a short 90’s boy band coiffure. She has since then fiercely assessed through her fashion preferences by choosing garments that accentuate her masculine features and neutral color palettes that brings evocative transformation to the looking eye.

Ezra Miller
“I don’t follow trends but try to create one that fits me perfectly and expresses the essence of who I am…Fashion is art too. It’s something we should respect, but not follow- or at most interpret…”.The surreal transformative artist stated this as his voracious inclination of creativity spread against the grain of the entertainment industry. The epitome of variety has given Miller the savoir-faire to phase through idiosyncratic off and on red carpet looks. Ranging from eccentric blazers to band t-shirts with the occasional flamboyant hat. A multifarious renaissance je ne sais quoi and raven hair has roused the souls of many seduced onlookers. However, with style of Miller’s caliber, screams oblivion to opinion.

The children, who are deplored, can close the door on this world and walk into a new one, hand and hand, where primitive acceptance can reign supreme. A moment in time where cosmic entities can grow and nurture themselves to deep of power and self-love.