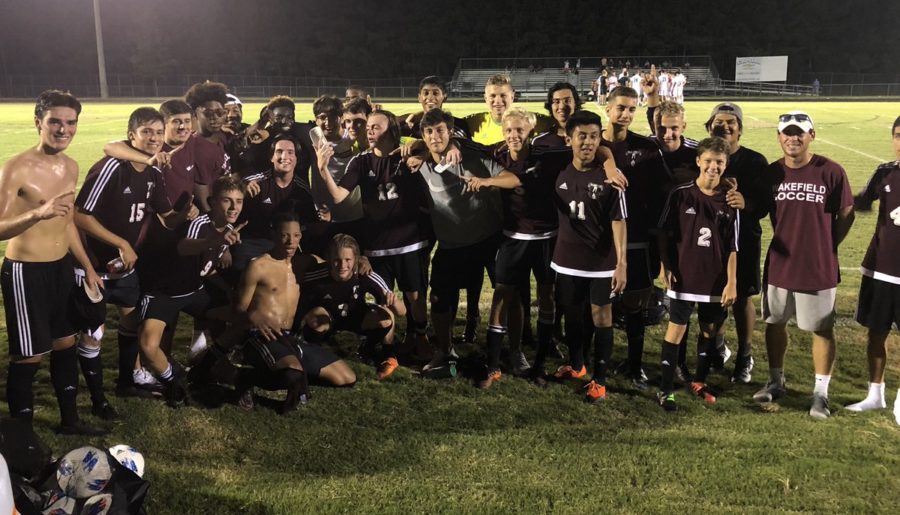 Under new coach, Cooper Paiva, the varsity men’s soccer team has had its best season record in five years. Unity, leadership and endurance aided the team in winning matches against competing teams.

“The boys wanted to be the best team they could be, pushing each other to be better and better soccer players. We’ve won some great games because we played with a lot of heart,” Paiva said. “These boys saw players at their best and their worst, but they never gave up.”

The team ranked fourth in the Northern Athletic Conference. By finishing the season 10-10-1(ten wins, ten losses, and one tie), men’s soccer was able to qualify for playoffs. However, the Wolverines fell in the first round to the Broughton High Capitals in a close match.

Taylor Rotosky is one of the few freshmen to earn a spot on the varsity sports team. He has proved to be a great addition, as he consistently displays his ability to score and be a team player.

“I always like to be able to support my school in an athletic way, and soccer is my favorite sport,” Rotosky said.

The team lost eight seniors last year, which caused them to rebuild. Their senior captain tore his ACL mid-season, which caused a change in strength. Similar to last year, the Wolverines originally didn’t have a coach. This caused the team to delay summer workouts and practices. Although these factors were seen as setbacks, the team was able to defeat the three-year state champions, Green Hope High, 2-1.

Junior captain, John Alexander, remembers the Green Hope game as his favorite part of the season.

“A team always needs a strong leader and I stepped up and took that role,” Alexander said.  “This led to us winning.”

Paiva acknowledges how teamwork really does makes the dream work.

“When the whole team was on the same page, we would play a really strong possession game,” Paiva said. “With lots of very technical players in the midfield, we were able to dominate in many of our games.”

Senior captain, Ali Sharif, has played all four years on varsity, and over the years the team has become his second family. His role has helped the players grow and develop within themselves. Despite his injury, Sharif attended matches to give guidance and support his teammates.

“I’m proud of everyone on the team for keeping it together,” Sharif said. “They put a positive mentality to the situation towards the year.”

Paiva isn’t new to coaching but has come back in town because of all the talent in Wake County. Raleigh is known for having strong soccer teams.

“Coach Cooper is great, probably one of my favorite coaches that I have ever had,” Rotosky said. “He’s awesome. He lets us work things out as a team.”

Sharif also expresses how Paiva has helped him and the team.

“My coach has helped me improve as a leader and a person because he has taught me to be more of a father figure for the team,” Sharif said. “Make sure everyone is in check, or not doing something [irresponsible] off the field causing them not to play.”

The Wolverines stayed together on and off the field. Their strong chemistry helped them with collaboration during matches.

“We always hang out on the weekends. We all hang out outside of school to get close to each other. It makes for a better bond on and off the field,” Alexander said.

The men’s team has proven to be victorious, despite having obstacles during the season. With seniors transitioning off the Wolverines will have room to welcome new players. Next season the team expects to continue with their momentum.

“We have a lot of juniors that will be back next year,” Rotosky said. “We will know what to expect and come back harder than ever,”