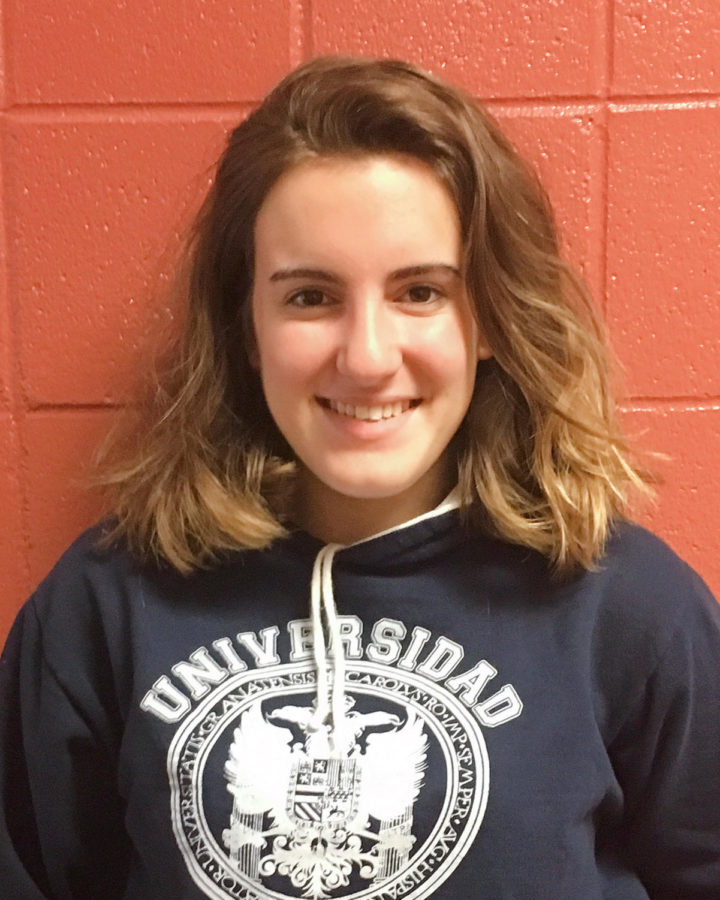 Take in the sensation of being wrapped in a cocoon of familiarity. Paint the kaleidoscopic picture of cities, lights, and sounds of people who reek of similar functions. You are a flying bird who sings songs filled with stimulating rhythms of hope and comfort to an industrial skyline of fire and fury. Now, see these neon concrete jungles of dreams melt to a landscape of desolation.  You are greeted with a doormat to this “new world” that reads “egos and past lives outside”. This was the reality for new exchange students from Spain, Gema Navarro(junior) and Claudia Pons (senior).

Now evoking the aura of adaptive transformation. An ability that enhances periods of reminiscing yet entices strength. Both of them didn’t evade any detail while speaking of their own personal outer/inner transitions.

“First days were hard. It was mainly due to the school being so big,” Navarro said. “My school was much smaller. At first, it was so many changes, now I like it. After all, I wanted to live this, and every day there’s something new to learn.”

Pons illuminated her experience of a  defeated tense sense of anxiety with the fortification of comfortability. A sting that caressed and molded her to be a staple of change within the school.

“First, it was hard for me, because I didn’t know so many people. However, now I am more comfortable here,” Pons said.

It seemed to arouse a sense of purpose in both of the girls to recollect the feeling of warm embraces of welcoming Americans. The eyes of teachers and students galloped for support and recognition of Pons’s and Navarro’s presence.

“I suppose, everyday acceptance comes easier,” Navarro said “ I meet new people all the almost all the time. When you meet new people, you start to understand how things work.”

When coming to understand how things work, we might travel to outside viewpoints to gather the full retrospect of the majority.

Administrators Elizabeth Hanna and Jessica Chambliss weighed in on the priority of how Navarro’s and Pon’s presence affects the whole dynamic of the school.  Both believe all students of Wakefield possess the core dynamic of open-minded acceptance. They do, however, have vibrant visions of how to further coexist fruitfully.

“Having these new exchange students, offers them and us to be exposed to many new different cultures represented throughout the school,” Chambliss said. “Also it gives them a chance to partake in activities related or not related to culture in the school.”

Hanna expressed her gratification for a new horizon of diversity both of the girls will ensure.

“Even though it is great for our exchange students to be here, it offers a remarkable opportunity for our students to learn, very closely, about other cultures,” Hanna said. “ [And to] learn how school and overall teenage life is like in different cultures.”

Within schools, there is no exaggerated infatuation for the delving into different cultures after freshman year. For us to finally taste or see a glimpse of these cultures molds the very foundation of our schools.

Both of them then elaborated on their positions mentors for each of the girls.

“I have a very strong relationship with one of the girls. We’re at the point where she can come to me with certain questions about school and different clubs she would like to be a part of,” Chambliss said.

Hanna emphasized her guiding light as being a stepping stone for closure.

“I met with one of the students at student registration this year,” Hanna said. “We talked a lot about what supports will be needed. I touch base with her every few days just to make sure her transition is going ok.”

Pons and Navarro had to shed this demeanor of vulnerability to fully intake the power of strength. This developed integrity, within them both, will repaint the landscape of Wakefield. Allowing the face of the school to manifest a light that sets an example of prosperity and inclusivity for other schools.

“I suppose I’ll always feel like I’m a part of Spain,” Navarro said. “Even though I’m starting to feel like this is where I need to be.”