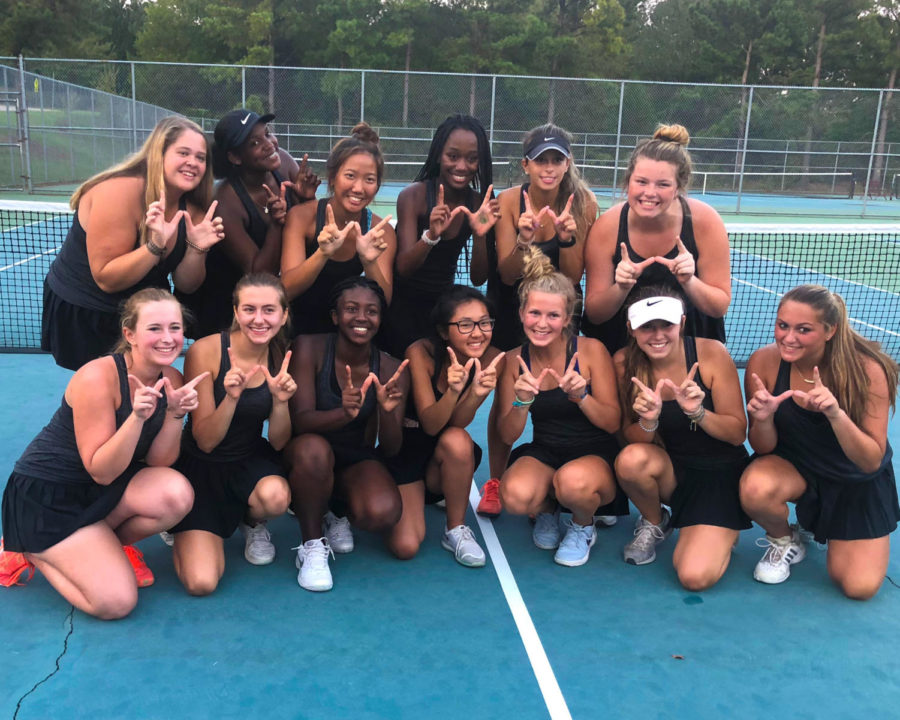 Tennis team takes a group picture with their W pride.

The Wakefield Wolverines women’s tennis team has excelled against all odds this season. They had an 8-4 record this year and were conference champions for the first time under their current coach, Stacy Morgan.

Senior captain, Julia Johnson, accredits the success that her team rendered this season to her coach.

“I give my coach the complete credit for my team’s success this season,” Johnson said. “She never let any of us give up on ourselves or each other, and always made sure we were functioning as a team. She is the best coach I’ve ever had.”

Sophomore sensation, Bliss Dowden, also praises her coach for the effort that she put into the team’s season.

“[Coach Morgan] is awesome,” Dowden said. “She is very supportive and doesn’t give up on us, which gives the team more hope.”

This season, the team was more of a tight-knit group than teams previously coached by Morgan. From the start of the season, the ladies meshed together perfectly.

“This year’s team is more cohesive,” Morgan said. “Tennis is kind of an individual sport, but I think that they have really worked on togetherness this season.”

The Wolverines faced adversity this season as they marched through a tough schedule, which included two matches against inner conference rival, Wake Forest High School. They lost to the Lady Cougars in their first meeting, but they avenged the loss during their next encounter.

The Lady Cougars and the Lady Wolverines have an intense history when it comes to tennis.

“We always work towards beating them and we did that this year,” Morgan said about the matches against Wake Forest.

The team also got revenge from a loss to another inner conference rival, Rolesville High School. The Lady Rams beat the Lady Wolverines in their first match at Rolesville High, by a score of 6-3, but when they returned to their home court, Wakefield won by a score of 5-4. The team only lost two matches, at home, this season.

The future is bright for the Lady Wolverines tennis team. Continuous success in the program is a priority for Coach Morgan.

“I think our team is growing each year, and it will continue to grow,” Morgan said. “We have girls on the team that will help inspire the younger girls to come out as well.”

Tennis beyond high school is also a figment of desire for some of the ladies. Taking on the challenge of playing tennis in college is a dream for some.

“Tennis means everything to me,” Dowden said. “I’ll hopefully play in college, and for the rest of my life.”

Johnson shares the same admirations for her tennis career, as she plans to proceed with her passion by playing club tennis when she gets to college.

“I just want to keep tennis in my life,” Johnson said. “It has been a big part in me building new relationships, and having a feeling of accomplishment in myself.”

“I think what I will remember most this season is how everyone immediately had chemistry and got along,” Johnson said.  “My last year with the team was extremely exciting and with experiences that will definitely help me in the future.”