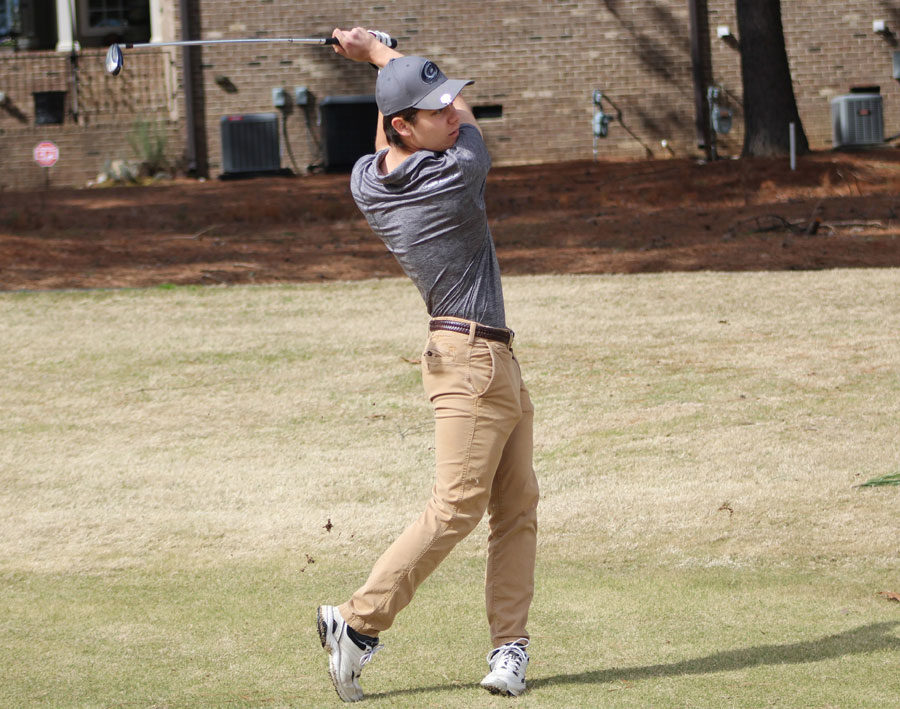 Senior, Joey Davidson follows through with a long shot.

Wakefield’s varsity men’s golf team is ready for their season to begin. After five weeks of conditioning, the team is set to win. The players hope to improve their season standings from the previous year. In order to complete the team’s goals, players Coleson Henshaw, Wesley Heaton, Jason Crews, Joseph Davidson, Hayton Sanders, and Wood Williams have worked hard on team building.

Sophomore Jason Crews has been playing golf for seven years. He is thrilled to get the season started.

The team is excited to play new schools as they enter into a new division, Northern Athletic- 6. Rivals this year include Corinth Holders, Heritage, Knightdale, Rolesville, and Wake Forest. The biggest competitors are believed to be Corinth Holders and Heritage. In their first and second match, the team placed second, while the top spot was held by Heritage.

Sophomore Weasley Heaton started playing golf with his father two years ago. Since then he has enjoyed his first year on the team. Playing the game has taught Heaton a lot about etiquette.

“I’m hoping that we beat Heritage,” Heaton said.  “From what I understand [the conference] is a lot easier than last year, that’s good.”

Leading the team is Coach Doyle, who has been coaching the men’s golf team for 12 years. Doyle holds a passion for the sport as he has been playing since his early 20s and enjoys watching the PGA tournaments on TV. Having only two seniors, this is one of the youngest teams he has coached.

“Being in a new conference is tough, but we are young. We are trying to improve, we can get better,” Doyle said.

Senior Joey Davidson is team captain. Having been on the team for all four years of high school, Davidson has high hopes for his last season. He plans to continue golfing as recreational fun. He is ready to face this new conference head on and compete with different schools.

For the next two months, the boys will be taking on courses all over the county, including Wendell Country Club, Heritage Golf Course, Riverwood, Wil-Mar, Zebulon Golf Course, and our home course Wakefield TPC.

Training at Wakefield TPC, the team works with Coach Doyle to improve their game. Going to the practice driving range, playing on the courses, and taking advantage of the putting greens helps the individuals on the team to build their skills in the specific areas that they need.

“I’m [working] on finishing better, mainly chipping,” Heaton said. “Coach [Doyle] will come by and help everyone with their swing.”

Coach Doyle hopes to see improvement throughout the season but knows the team will triumph.

“Continue to work on your game,” Doyle said. “Don’t spend all your time at the range, spend time at the putting green and on your short game. Play all year.”