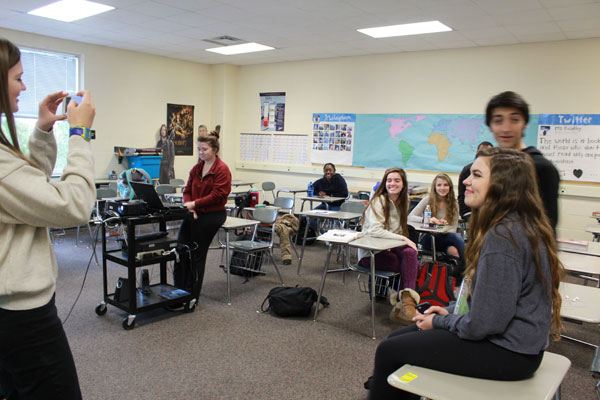 Members of the Animal Rights Club discuss the implications of buying vs. adopting animals.

Wakefield boasts nearly fifty student clubs and organizations ranging in areas of specific academics, interests, and talents. Clubs are continually created and added as any student can start up a club (as long as an advisor is found, paperwork is completed, and administration approves of it). This school year, a variety of new clubs were added including the following: People for Animals Rights Club, Buddhist Club, Dumbledore’s Army Club, and the Asian American Association. Each organization is unique and contributes to the makeup of the student community.

These clubs are open to all students and serve as a way to connect people in the school.

The People for Animal Rights Club was founded in October by senior president Rachel Livingston. The organization was designed with the goal to bring awareness to the various aspects of animal rights.

“The purpose is to educate people on the importance of animal equality and showing them ways to stop animal cruelty,” Livingston said. “Hopefully we can get at least a few people to choose a cruelty-free lifestyle, but we would never push it on club members. We just want to help the animals.”

“[Students] get to learn how important animals are, how much they impact our world and get a broader view of the world we live in,” Livingston said.  “We don’t push vegetarian or vegan beliefs, but we provide opportunities to try that lifestyle and help people find alternatives and ways to live that way. Students who are vegan or vegetarian are able to converse and meet people like them.”

The club’s first meeting was on December 1. A typical meeting contains food and discussion regarding animal rights.

“We have only had one meeting and that consisted of food, a powerpoint, discussion and a cute animal video to brighten everyone’s day,” Livingston said. “We’ll continue with the powerpoint each time discussing different topics each meeting like Seaworld or things local like animal shelters and what we can do to help in our community. At the end of each meeting, we have time for anyone to say whatever they’d like to or throw out topics we could talk about next meeting.”

Livingston and the People for Animal Rights Club’s aim to inform, connect, and empower students who share this passion.

“Overall my goal is to educate people on animal rights and make people who feel the same as I do that they can make an impact on our world, and there are other people like them in the school that they can befriend and talk to,” Livingston said.

The Buddhist Club was founded in September and was created by senior president Radmehr Beig with the intent to share with students the benefits of the Buddhist philosophy.

“I was looking to start [the Buddhist Club] since I started looking into Buddhism,” Beig said.  “I realized how much it can benefit anyone and how much people from all races or even religions can use some of the methods and teachings to make their lives better.”

The club’s core is rooted in sharing Buddhist philosophy and studying its benefits.

“[The main purpose is] to enlighten people and teach them about Zen Buddhism, how it can be practiced, and how it could benefit us,” Beig said. “We are also interested in volunteering at local temples.”

The Buddhist Club acts as a way for students to learn more about Buddhism and its key aspects. Beig commented on the positives associated with studying the teachings of Buddha.

“In the club, students will learn about the teachings of the Buddha,” Beig said. “We will talk about things like meditation, the Four Noble Truths, and the Middle Way. These can help everyone in their everyday lives. Meditation can benefit us mentally and physically.”

The club first met on September 30.  A typical meeting consists of a discussion of a topic highlighted in Buddhism and how it can be applied to an individual’s life.

“We usually talk about a topic; for example, the last meeting was how to do meditation and the first meeting was an introduction to Buddhism,” Beig said.

As the school year progresses, Bieg is hopeful to see a positive outcome of this club on the school.

“I think it can help [students] be happier in their life, and they can try out something new,” Beig said. “It’s important that we understand Buddhism, especially the branch we practice, is a philosophy in its core, rather than a religion. That’s what I mean when I say “try it.” You don’t have to change your religion or anything.”

The Dumbledore’s Army Club was established by senior co-presidents Ryan Carswell and Lizzy Crosson during September. The organization focuses on analyzing the text of the Harry Potter series and applying the lessons learned to real life.

“I like the books so much, and I feel like people look at them more as a cool story, but there are a lot of really good quotes in there that you can apply to everyday life,” Carswell said. “Little life things, there are some nuggets. I don’t even know how to explain it, but there’s just some really good gems in the books.”

This club is ideal for all Harry Potter fans; however, students are not required to have read the novels in order to join.

“You don’t even have had to read the books,” Crosson said. “You can have no prior knowledge of [the series] whatsoever.”

A typical meeting is full of conversation of the novels and their application. However, Carswell and Crosson have plans to specify the structure of future meetings to come.

“The first meeting was getting to know people and talking about the club,” Crosson said. “What we plan on doing is talking about the different books and how we can apply them and picking out different ways. We actually were thinking about doing a book each meeting, kind of like chronological order.”

Students not only are able to discuss and connect over Harry Potter but then also get the opportunity to further examine novels and develop a skill of doing so.

“For me, it has less to do with Harry Potter, but more being able to look at a work and pick out different symbols and understand a character’s motivations and things like that,” Carswell said. “A lot of that is easier to understand through the discovery of the work.”

Junior president Calvin Nguyen decided to renew the Asian American Association at the beginning of this year.

“I did [form the Asian American Association]; it was all me and my friends,” Nguyen said. “We were thinking we should start this [club] up. We heard that one was here a while back and we decided to reinitiate something of that kind.”

Nguyen’s goal for the Asian American Association this year is to celebrate and raise awareness of different Asian cultures.

“We have a variety of different ethnicities within the Asian culture, and we really like to celebrate and get to know the different cultures,” Nguyen said. “There’s Korean, Chinese, Vietnamese, and there’s plenty more in this school. We’re just trying to raise awareness of the different types of Asians.”

Meetings are usually casual and are made up of discussion and activities relating to Asian culture.

“A typical meeting consists of games and videos that relate or are from Asian TV shows or Asian games,” Nguyen said.

The Asian American Association allows students to get to know each other better and converse about culture.

“I think it’s really fun to join because we play games and just talk to each other,” Nguyen said. “We’re just trying to learn about each other, and I think it’s good for your awareness on Asian Culture. It’s just really fun; it’s a good time to have.”

Nguyen encourages any student interested in joining the club and hopes that the club will continue to grow.

Each of these student-initiated clubs are open to anyone who is interested in joining.