The music industry is failing musicians 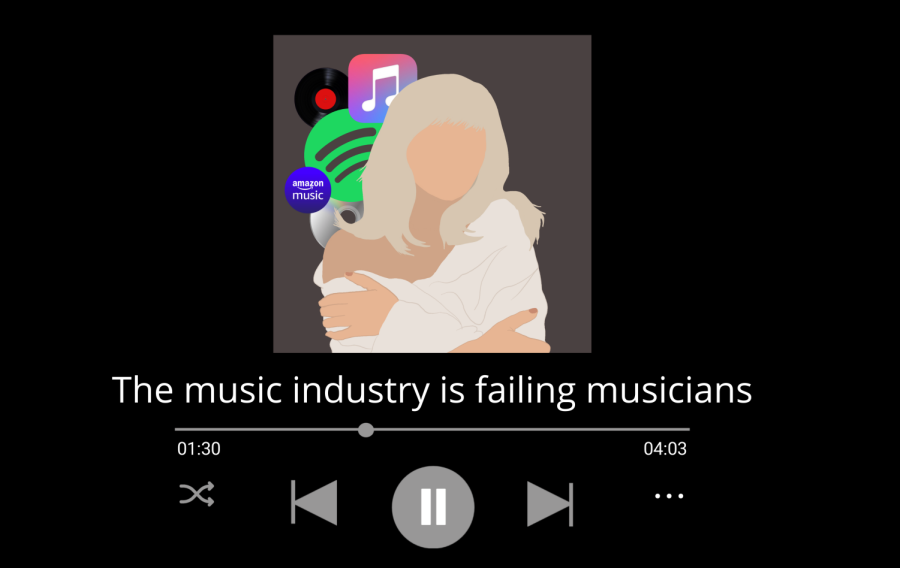 The overwhelming pressure that musicians feel to succeed has shifted the overall purpose of the music industry.

As my phone flashes with the black and green loading screen for what feels like the 20th time that day, I wait with anticipation as my 67 individual playlists flood my phone with music curated for each of my very specific moods. The melodies of Hozier and Rainbow Kitten Suprise fill my ears as I forget my troubles and let the music consume me.

If you’re anything like me, this scenario sounds rather familiar. Music can be a solace for many individuals, including myself, that helps us process our emotions and soothe our anxieties with words that truly connect to us. With nearly 70 million songs available on Spotify, it certainly isn’t hard to find music that speaks to you. As we lose ourselves in the harmonies of our favorite tunes, however, artists are losing themselves to something much more serious. Though the music industry would be nothing without the musicians that shaped its success, the industry truly does not care about its artists.

Musicians such as Ed Sheeran and Ariana Grande make millions of dollars a year off of their musical endeavors, yet most other artists are not so lucky. One of the most popular music streaming platforms, Spotify, only pays artists between $.0033 – $.0054 per stream, meaning that a song would have to be played nearly three separate times to merely make a penny. Independent artists struggle immensely with this as Spotify often pays popular artists to license their music – an offer largely only given to musicians under a major label. Other streaming platforms, such as Apple Music, offer an even smaller margin with artists making between $0.007 – $0.01 per stream.

Young creatives find themselves driven away from pursuing a career in music as these margins make it nearly impossible to afford their basic needs. This lack of financial support seems to shift the overall purpose of the music industry. Instead of focusing on creating music that they can truly be proud of, musicians are forced to focus on the monetary aspects of their careers. The question then becomes what will make the most profit instead of what music the artist wants to create.

This looming pressure to succeed is ingrained in the minds of these artists, leading them down a rather dark path. American singer-songwriter, Billie Eilish, has been very vocal about her own struggles with mental health after being thrust into the spotlight at such a young age. Eilish’s unique sound and vocals gained her notoriety at the early age of 13. Growing up under the constant vigilance of the public eye, however, took a toll on her mental wellbeing. After her sudden claim to fame, the young star believed she would never be happy again and stated she did not think she would make it to the age of 17.

Though Eilish’s case may seem rare, this is an almost universal experience for many artists simply trying to pursue their passion. In an industry that hinges on the success of its artists, why does it feel as though musicians are given little to no support when it really matters?

This issue truly comes down to how society views artists as a whole. We consume their content daily, yet many still see these individuals as products instead of actual people. Musicians do not exist merely for entertainment purposes or to make record labels millions of dollars. These people all began with a dream to share their songs with the world and pursue a career that truly makes them happy.

The current state of the music industry may be riddled with toxicity and money-obsessed individuals, but it doesn’t have to stay that way. Supporting small artists and recognizing the real people behind each song we stream can truly take us a step closer to what the music industry was designed to be – a collective group of artists who wish to share their stories with the world.