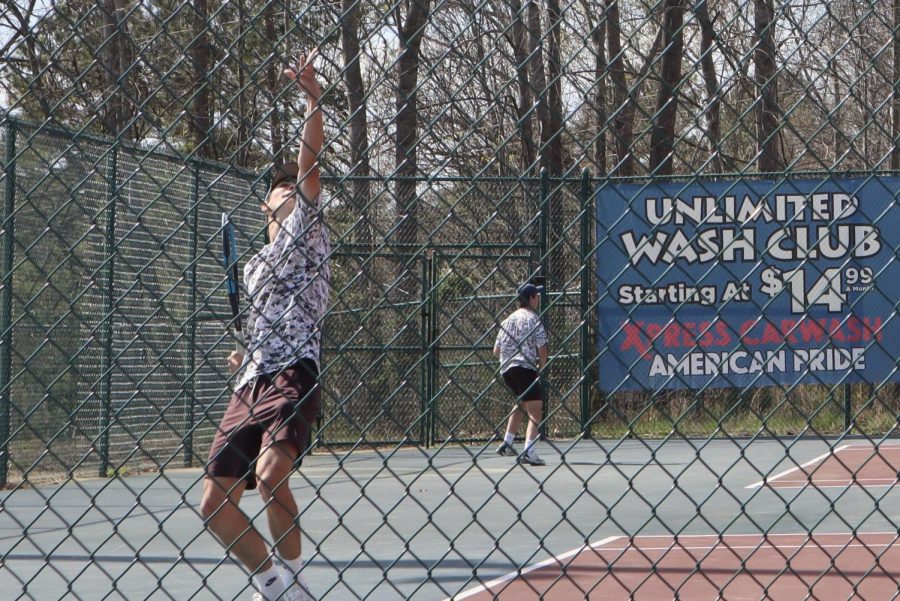 Depending on the sport, sometimes group dynamics can stress players who work better independently.  What sets tennis apart is the fact that players have the opportunity to compete both individually and in pairs.

Patrick Newton is a junior who has been playing tennis since a young age. He shared his experience.

“You play your own game. If you get behind you don’t have to worry about other people and what they’re thinking or doing,” Newton said. “You focus on your own mistakes and fixing them.”

Having won conference, the team is now heading to regionals at Millbrook High School on Friday, April 29 where the players will compete in both tournament and exhibition matches.

Tennis can be a lot more than just a racket and a ball. Some players use the sport to get out of their comfort zone, and being on a smaller team can help make them more comfortable. Though players often compete individually, there is still a sense of community among the team. Thi Nguyen, senior, explains how this environment has affected him.

“I like the fact that you can play alone and see your improvement,” Nguyen said. “You make a lot of connections with people and it’s gotten me out of my shell.”

Along with the independence of the sport, the pressure of performing alone can be intense. Alex Ovalle, sophomore, elaborated on this.

“Being able to play individually, you’re thinking about yourself,” Ovalle said. “When you’re on a team you have a common goal and other people to think about.”

Though players do not always compete at the same time, they remain involved and engaged in their teammate’s matches. Players often make memories from the sidelines as well as on the court.

“In our match against Broughton, one of the singles matches was going really well and we were cheering back and forth and he ended up winning the match,” Newton said.

Being a part of a smaller team allows players to make friendships and paves the way for unique opportunities that other athletes may not have. Lucas Kenney joined the team during his senior year and shared what tennis has meant to him this season.

“Being on the team has benefitted me because it introduced me to something I am not used to doing,” Kenney said. “I got to play one duos, which is the highest court, with my best friend. I’ll only get to experience that once.”