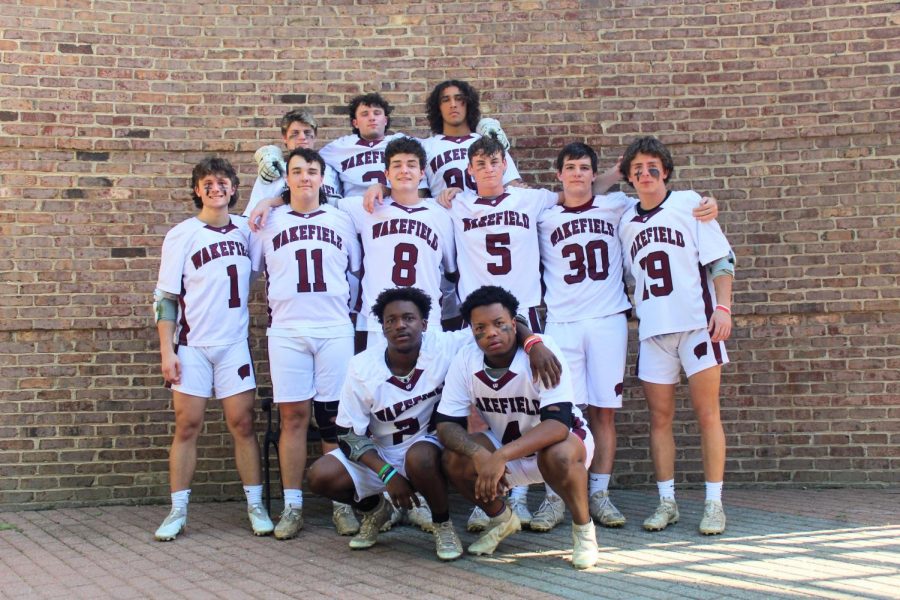 The seniors of the men's lacrosse team uplift and encourage the underclassmen around them.

Although the past three years have been far from normal, the seniors of the Wakefield High School men’s lacrosse team have shown continued persistence as they strive to work hard through the season in hopes of leaving a memorable legacy behind. They wrapped up their season with a record of 11-5 after an intense battle to the end.

With leaving a significant foundation behind, comes the creation of a bond like no other. One attacker, four midfielders, one long stick middie and three defenders make up the nine determined seniors endeavoring to leave a legacy impactful enough to continue a positive future for the lacrosse team and its future players. Attacker and soon-to-be graduate Reece Johnson shares the legacy he longs to leave behind.

“I hope to leave a legacy that shows that all are welcomed on the Wakefield lacrosse team,” Johnson said.” “A little bit of hard work and [willingness to] compete goes a long way.”

The seniors continue to stress the importance of hard work — especially towards the underclassmen. Defensive player and fellow senior Gregory Broad emphasizes how this has come into play during his fourth and final year on the team.

“I’m most proud of the guys this season who just picked up a stick in the fall and have already shown so much improvement and love for the game,” Broad said.

Another defensive player, Kennedy Nelson, says he’s most proud of becoming a starting player after just two games in his first season ever.

“Since it was my first year, everyone gave me a ton of advice on how to get better,” Nelson said.

An additional senior player, first-season Midfielder Jackson Froh also emphasizes the significance of putting in your all.

“[I know] that if I put my mind to something, I can do good even though it was my first year ever playing,” Froh said.

The nine seniors agree that the lacrosse program has influenced them individually and as a team. They want this prestige to be enduring for future players as it keeps the team’s bond strong. Braden Stantz, a defender, shares the sentiment that the team’s connection is like no other.

“All the guys have a really tight bond, and they are all like my brothers,” Stantz said. “I felt very welcome for my first and last year on this team.”

Many seniors have been playing together since middle school. Captain and Midfielder Davis Mann is among them.

“We’ve all known each other since eighth grade and helped build the legacy up,” Mann said.

However, this has not stopped the group from forming strong connections with the newer players. Many of the graduating lacrosse seniors are currently in their first season with the sport.

“We’ve had a couple [of] new guys pick up the sport this year who have gotten a lot better over the course of the year,” Mann said. “Being my senior year, I feel like I contribute a lot to helping them grow.”

Mann’s Co-Captain, Coleman Kraske, is nationally ranked fourth as a Face-Off-Go-Off (FOGO) and plans to attend Ohio State University next year to continue his lacrosse career.

“When I was a freshman, I got to look up to the leaders that led me and try to follow in their footsteps,” Kraske said. “Taking their spot now is a privilege and an honor.”

As the seniors unite to finish their last season together, their bonds continue to strengthen into a brotherhood that will remain for life. Jaylon Dixon, a first-season midfielder, shares how this group will influence the rest of his life.

“It taught me a lot of discipline and how to work as a collective [team],” Dixon said.

All of the players agree that the lessons taught through working as a team will stick with them for the rest of their lives, including Long-Stick Midfielder Jack Huffstetler.

“[The team] taught me to have everyone’s back no matter what,” Huffstetler said. “This will carry my relationships in the future.”

Win or lose, the team knows that synergy and brotherhood are two of the most important ideals to uphold, and the players will continue to value the lessons taught in the lacrosse program as they go their separate ways.

“It’s just so much fun; the memories, the team, the guys are so funny — I just want to leave behind how much fun the program is so that the next generation can see it as well,” Kraske said.