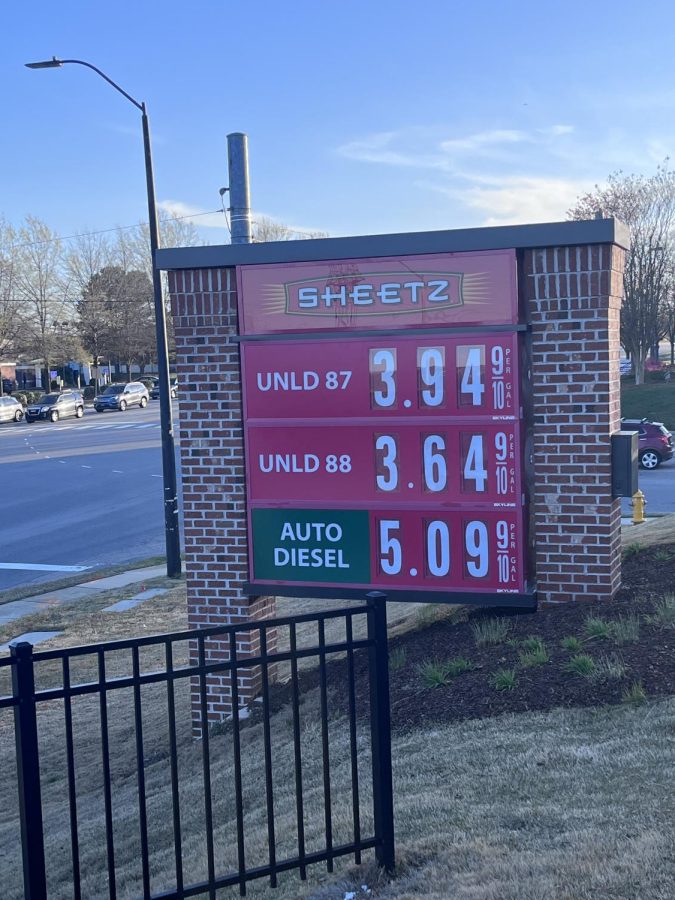 Gas prices at Sheetz are rising to almost four dollars a gallon in NC.

Our nation’s gas prices have reached an all-time high, and Americans are struggling to keep up. As the country feels the effects of the war between Russia and Ukraine, it seems many are being hit hardest at the gas pump. There’s no favoritism with our current situation, young or old, rich or poor, democrat or republican: everyone is experiencing inflation.

Norah Spiena is a Junior at Wakefield High School and a working teenager who understands the struggle of paying for gas.

“I hate that I have to think about prices so much now,” Spiena said. “Driving used to be one of my favorite pastimes, and now I can’t do that anymore.”

The average cost of gasoline averages is currently four dollars and can mean $100 for a full tank depending on the type of car. Many citizens are adopting new ways of transportation, such as carpooling and walking, to deal with expenses. Additionally, the higher prices are costing kids their teen years with the constant worry about money. Gas might not be the only issue gaining attention in the US right now, but it is one of the most significant.

Christian Strickland is a Civics teacher and shares her input on the current problems in the US.

“I think the situation with Russia and Ukraine has pretty much enticed inflation, especially added to it with gas,” Strickland said.

Russia is one of the most significant oil producers globally, and many countries rely on them for gas. Luckily our government doesn’t entirely rely on Russia for gas, but neighboring countries have to continue supporting the war unwillingly due to their dependence on Russia’s products. Among others, Poland, Belarus and Romania get 40 percent of their oil products from Russia.

This causes them to be fully reliant on Russia; cutting off imports is making a massive impact on their economy and people’s everyday lives. In the US and many other countries, banning imports creates these vast increases in prices. The rising costs aren’t causing the demand to decrease. Instead, even as gas prices steadily rise, more and more Americans are sacrificing valuable money for gas and transportation.

Biden is supporting Ukraine President Vladimir Zelensky, and therefore ending the trade of metals, chemical products and machines between Russia. Some don’t agree that our partnership with Ukraine is worth the inflation, but we were experiencing inflation before the talk of war.

Bryce Dunkelberg is a senior at Wakefield and requires a good amount of gas to fill up his truck.

“I don’t think prices will drop until 2024 with the new election,” Dunkelberg said.

Gas prices rising 19 percent initially and then another 17 percent during Biden’s administration can be hard to disguise, but there are other reasons for the escalation. COVID 19 caused many oil companies to shut down due to a lack of employees and supplies. This left the US missing fractions of the goods enjoyed in previous years and left a longing for the life and jobs that were had in the past.

Another motive that led to the rising prices was the Russia-Ukraine war which led to an immediate rise in gas prices. Ending imports is the first monumental move on Biden’s part and creates a firm stance that America supports Ukraine and not the acts of Putin.

“The Russian invasion of Ukraine has a big impact on the rising gas prices,” Foster said. “Some may argue that President Biden has some options that he could exercise to lower the gas price, but those wouldn’t help more than maybe 10-15 cents per gallon.”

There are so many factors contributing to our economy that it’s impossible to blame one specific reason. Society is divided trying to support a reason for the gas prices,  causing a frenzy in real life and social media.

There is actually more going on than what’s being talked about. Americans spend about 16 percent of their income on transportation, and that percentage goes up in lower-income households. Making necessary adjustments are manageable for some, but others aren’t given that flexibility.

“We live in a world where people have to decide whether they should fill up their tanks or buy groceries,” Strickland said. “[Nobody] should live like that.”