War becomes the top trending topic on all social media 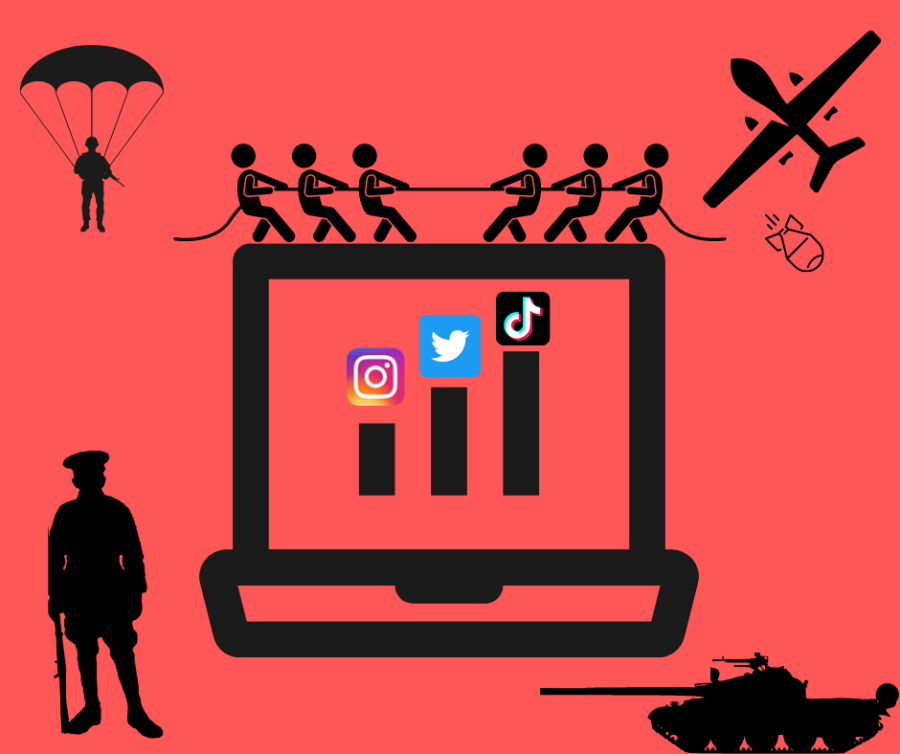 Social media has become A warzone

On February 24, Putin invaded Ukraine because  Ukraine denied Russia’s request to work together Since the Vietnam War, technology has grown tremendously. In today’s age, you can find everything on the internet, from finding out what kind of animal you are or the latest fashion trends. Recently many social media platforms have been showing videos and pictures of events happening in Ukraine.

TikTok is a social app that allows users to make short videos and has recently been flooded with videos taken in Ukraine. Content creators have been trying to spread the information about the war to educate everyone about it. Mr. Bayer is a Civics and Economics teacher at Wakefield High School thinks the internet can help and threaten people.

“It depends on the side [of the war], Russia is trying to control their narrative where since its censored, it makes it’s dangerous,” Bayer said. “[On the] Ukrainian side it can only help.”

Tiktok Creator David Heath, a journalist who used to write for CNN reposted a video that originated from a TikTok account called @karysia, which had many emotional comments. The video contained a woman playing her piano for maybe the last time in her destroyed house from a bomb that Russia sent over. It can be so important to have these more popular creators posting and putting awareness for people less fortunate because…. Mx. Cyr, Wakefield Highschool Civics and Economics teacher has seen many videos over the couple of days that include Russia and Ukraine.

“I have seen a lot of videos, mostly Tiktoks, I saw a video of a Russian jet launching a missile at an occupied Ukrainian house,” said Mx. Cyr.  “It was quite horrifying and a realistic depiction of what it’s like living in a war zone.”

TikTok and Instagram’s platforms allow at least 13-year-olds to create accounts, and Tiktok does everything to keep its platform safe for kids by having videos/accounts banned if they disregard community guidelines. The internet has never been a safe environment for kids, but seeing these events in a primary source can maybe prevent and help the world later.

Liam Barbieri, a senior believes the internet is evolving.

Videos about the war are hard to control because ByteDance Ltd (the company that owns TikTok) has been trying to continue to stay neutral with both sides of the war. Since the war is not being censored from our feed, children are able to see all of the horrid videos that are uploaded. It’s controversial if children should be able to see graphic images like the war without warning.

Cameron Welker, a senior, believes these videos will shape children for the generation.

“Everything on the internet that children see shapes them, their morals or how they view the war in the future,” Welker said. “It depends on how it is being depicted that’s how they will view it growing up.”