The future of hockey at Wakefield 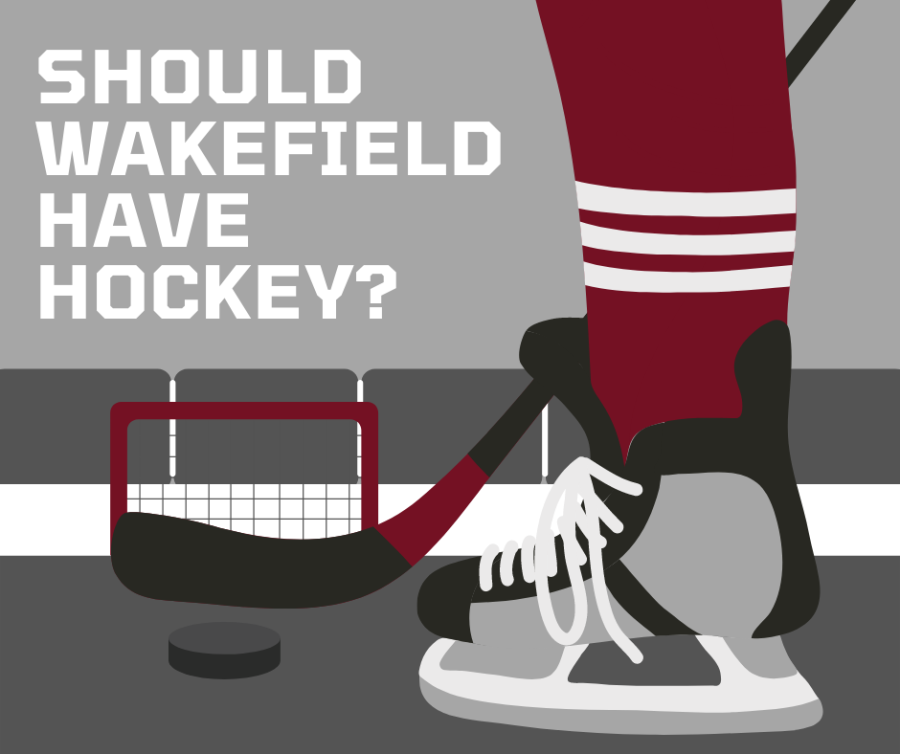 Students make the case for a hockey team at Wakefield High School.

At Wakefield High School, student-athletes certainly aren’t lacking in sports teams to try out for. However, there is a certain athletic group that is missing out – hockey players. Wakefield has lots of hockey players at the school, which poses the question as to why we don’t have a team.

Daniel Mattera is a student at WHS learning how to play hockey outside of school.

“I think that Wakefield should have hockey because it will bring the hockey players in this school to the team and would boost school spirit,” Mattera said. “It would also help Wakefield get more people into the athletics program and help people get more involved with the sport of hockey.”

Wakefield adopting a new sports team will open the door for more socializing among peers with similar interests. It will bring together a community of hockey enthusiasts and possibly create more hockey fans. Having a team could help kick start the high school students’ possible hockey future, maybe even guaranteeing them a spot on a college hockey team.

Ben Romano, a freshman at Wakefield, has increased his social circle because of his love for hockey.

“I’ve definitely made a lot of friends which helped me to be more talkative and outgoing towards people,” Romano said. “It’s just positively impacted me and helped me become more [of a] friendly person.”

The sport brings a lot to the table in the terms of self-growth and improvement. Despite the fact that Mattera just started playing hockey, he is already seeing impacts in his life.

If Wakefield were to add hockey to the list of sports they allow students to play, something to be considered would be the safety measures that have to be put in place.

Nikolas Monsees has been playing hockey for 11 years. He currently plays for the 15U AA Jr. Canes, and last year his team placed 2nd in the national championships. Monsees is experienced with the many types of safeties that have to go into place.

“I imagine the same safety measures that all of the youth teams in the U.S. have to follow [would be implemented]. For example, you always have to wear your helmet when out on the ice,” Monsees said.

Players don’t just have to make sure they’re always wearing their helmets. They have to make sure their skate laces are tied, their mouthguard is in properly and comfortably, shoulder pads/chest protector, elbow pads, protective gloves, and shin pads. For players, it is important to make sure that they are fully protected no matter what sport they play. The purpose of wearing protective gear is to protect players from aggressive actions that are a part of the game.

“ I think [when] it comes to checking and hitting on the ice, [students shouldn’t be] as extreme [as professional players],” said Romano. “There’s some leagues that won’t allow you to hit as hard or hit at all so you could put that in place to help keep it less dangerous of a sport.”

Despite hockey being a sport that students are interested in participating in, the main concern is the idea that there may not be any schools to play against.

“I think it would be cool if Wakefield had a hockey team, but I don’t think we would have anyone to play against so it might be difficult to get people to agree to play for it,” Monsees said.

However, contrary to Monsees’s claim, there are other schools in the Wake County area and even in the state of North Carolina itself with hockey teams. Some of the schools with hockey teams include Hayesville High, Andrews High, Smoky Mountain High, and so many more.

Overall, it seems like having a hockey team at Wakefield would be a success. There are already three candidates for the team: Mattera, Romano and Monsees. The principal of Wakefield High School, Malik Bazzell, has even said that he is supportive of the school having a team.

“[Increasing] kid’s connection to school is what I care about,” Bazzell said. “If [having a hockey team] connects kids to school then I’m 100 percent for it.”