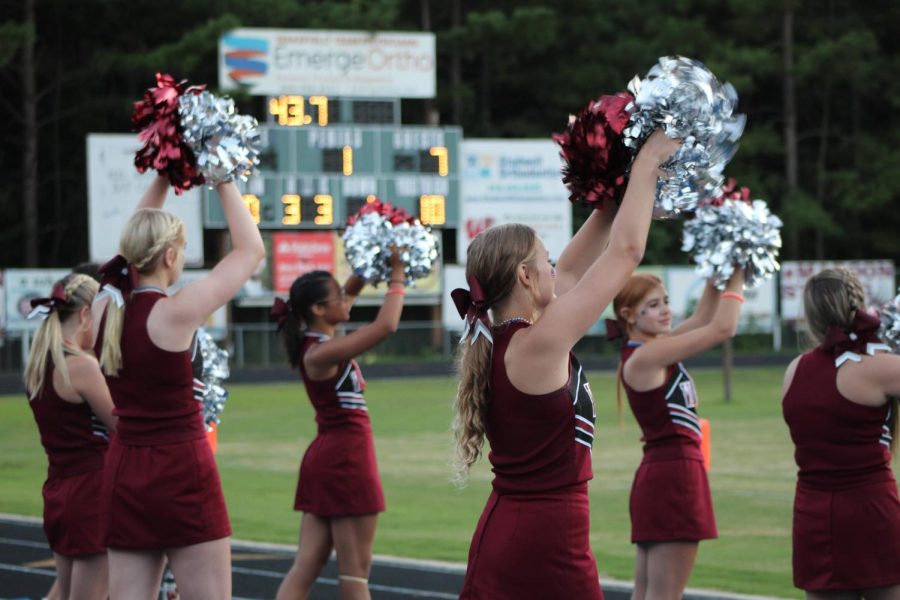 The cheerleaders raise their pom-poms high during an intense football game.

They are the symbol of excitement and anticipation at every sporting event, the hope of succeeding and the desire to win. Even when your favorite team is in dead last place, they continue to keep the crowd alive. They are cheerleaders; and somehow, despite being a sport for over a century, they continue to be ridiculed, stereotyped, and underappreciated.

Sophomore Piper Walls has been cheering for almost a decade, and knows the struggle that comes along with the title.

“People assume that cheerleaders aren’t smart just because they’re cheerleaders,” Walls said. “That’s such a big stereotype. Many girls on the team are taking multiple AP [classes] and have over 4.0 GPAs.”

Popular TV shows and movies are the main cause of these stereotypes, as they typically label cheerleaders as the mean girls who are on top of the school, and don’t pay attention in class.   For example, in the show “Glee”, one of the main characters, and also a cheerleader, Britney Pierce, is portrayed as an airhead. “Sometimes I forget my middle name,” she said in one episode. “I’m pretty sure my cat has been reading my diary,” she said in another. This is an example of how people view cheerleaders, because this is how they’re typically portrayed. Senior Alyna Sigel understands this pain.

On top of that, a lot of people choose to believe that cheerleading isn’t a real sport. Varsity coach Terri Skokauckas acknowledges how this can be detrimental to young cheerleaders.

“I think with cheerleading in NC not being considered a sport, puts the sport in an entirely different position as most sports,” Skokauckas said. “They compete every week to be the best they can be and work very hard with the student body on a daily basis to be good student role models.”

Though people think cheer isn’t a sport, it requires a lot of skill to practice.

“Just because it’s mostly girls doesn’t mean it’s not a sport or that it’s not difficult. Tumbling is really difficult and flipping hundreds of times on a hard court with no springs takes a lot of practice,” Walls said.

Walls has high hopes, however, for the future of Wakefield’s cheerleading team, in their new stunt team. Walls is hoping the stunt team will prove to people that cheerleading is a competitive sport.

“Stunt is supposed to be very accessible for everyone. You can join stunt with no cheer experience and we can teach you how to do level one stunting,” Walls said. “We don’t expect you to join and be a level 5, best athlete ever. It’s trying to show this is a really fun, physically challenging sport that everyone can do.”

Sigel has a positive outlook for the stunt team as well.

“I’m hoping it will bring in a population from the cheer team and the dance team, and with the stunt team I think people are going to be increasing their experience and improving tumbling and jumping skills, which will just further the program for cheer next year,” said Sigel.  This can bring in a variety of different people: from dancers to tumblers, there’s something for everyone to enjoy.

Peyton Jones, a freshman on the cheer team hopes that the team will thrive in the coming years.

“I don’t want cheer to be intimidating because I know a lot of people don’t want to be on the cheer team because they don’t have experience but you can come in your freshman year with zero experience and be taught everything,” Walls said. “It’s not hard if people take the time to work on it and are taught well.”