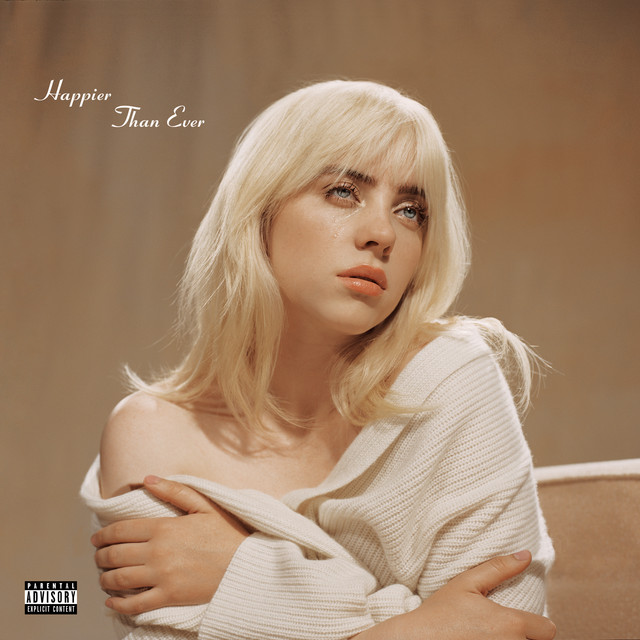 Happier than Ever by Billie Eilish

One thing we know about Billie Eilish is that she has a story behind all of her songs. Throughout her sophomore album “Happier than Ever” there is no doubt she has your emotions changing with every song. When it dropped on July 30, 2021, Billie Eilish’s album, “Happier than Ever” was received by fans in full force. This 16 song album was written and produced by Eilish and her brother, Finneas O’Connell, who frequently collaborates with Eilish on her music.

We loved this album because of the messages in each song, which is one of Eilish’s specialties. Eilish had previously dropped the song, “Happier than Ever” on April 29, 2021, as a teaser for the upcoming album. Fans and I loved this song because of the completely different vibe from Eilish’s previous music.

One song that stood out to us was “Therefore I Am” where she talks about how she hates when people use her for clout and fame. Some lyrics that stand out are “get my pretty name out of your mouth”. Becoming a big pop star so fast didn’t make it easy for Billie to get used to the fame. While the rest of Eilish’s music is much more subdued and quiet, this song was gripping at our heartstrings with its upbeat rock tempo. It is the perfect song to jam out to when you’re “in your feels” as many on Tiktok say. A song that felt powerful was “Not my responsibility.”  She starts out by asking the viewer if something is wrong with her music, body, or clothes. When writing music it’s important to put in positive messages. Body image and abuse is something that doesn’t get talked about enough and she puts her own twist on telling stories and informing her readers, like a PSA.

Eilish came to the music industry’s spotlight at the young age of 14, with her hit single, “Ocean Eyes”, and has been growing her fanbase ever since. Now at the age of 20, Eilish’s lyrics have notably been maturing the longer she’s been in the public eye. From beginning to end, this album is quite an emotional rollercoaster. Eilish produces a lot of music about the struggles of being a teen in the spotlight, and how the harsh reality of being a celebrity has affected her and her mental health.

While many may think that being famous for something that you love to do would be a dream, in Eilish’s first song of the album she says, “Things I once enjoyed/ Just keep me employed now.” I think this is a perfect example of how your dream can turn into a chore and is one of many examples of the deep meaning behind Eilish’s lyrics. After listening to her music one should feel confident in their own body and am reminded “I am enough.” At her concerts, Eilish showed her fans a video she created that starts at the beginning of her song “Not My Responsibility ”. It includes her explaining how she feels about body positivity and how others treat each other. This video has been nominated for the “Best Music Film” for the 2022 Grammys, which would be her 17th nomination.

While Eilish and her brother have come public with the insight that they’re starting her third album, they don’t have too much to say about it yet. We’re hoping that the next album has some more songs with an upbeat tempo and punk rock sound, but whatever Eilish gives to the world, will be amazing. Eilish has been inspiring listeners to become the best versions of their selves.

This album was a great addition to her past discography, and it was definitely one of the best albums released in 2021.

Manage Cookie Consent
To provide the best experiences, we use technologies like cookies to store and/or access device information. Consenting to these technologies will allow us to process data such as browsing behavior or unique IDs on this site. Not consenting or withdrawing consent, may adversely affect certain features and functions.
Manage options Manage services Manage vendors Read more about these purposes
View preferences
{title} {title} {title}
2
Share on Facebook
Share on Twitter
Share via Email
Print