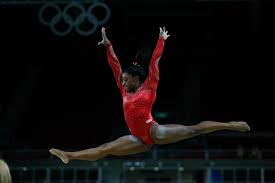 Being the world’s best gymnast, Simone Biles is used to making headlines. But this past year, the 24-year-old Olympian made the front pages for a different reason.

Biles abruptly withdrew from the 2021 Tokyo Olympics right before the women’s team gymnastics final. At first, people assumed it was a physical injury, but Biles later confirmed her reasoning, and it was not what viewers were expecting. She stated that her mental health wasn’t in a good place, and she wouldn’t be able to compete if her mind wasn’t 100% in it as well. She also added that the athletes were supposed to be having fun – something that she didn’t feel she was experiencing. The gymnast had repeatedly stated that she was eager to finish the Olympics.

While many people offered their full support to Biles and her decision, she also faced excessive backlash. Many social media users (none of which have ever felt the pressure of competing in the Olympics) had a lot to say about Biles’ choice, arguing that she let her team down. This is a very harmful view to push, as your team should not be prioritized over your mental well-being.

It’s been proven time and time again that depression rates are higher in teen athletes than teens who don’t play a sport. With the world watching, it’s important to note that while sports can be fun, healthy and excitingly competitive, there also comes a time when you need to put yourself first.

Sports were invented with the purpose of a fun and friendly competition. Now, people view it as a reason to become overly aggressive, whether you are a fan of a team or an athlete yourself. It’s no surprise that athletes are facing higher depression and anxiety levels when they feel immense pressure to perform well.

With the media backlash against Biles, she took it upon herself to make a statement about her withdrawal from the Games. She explained how she felt the weight of the world on her shoulders – which isn’t surprising, considering the world was watching her. She also stated that she was at war with her own mind; she didn’t want to abandon her team, but she also couldn’t bear the thought of risking her team medaling at all.

“I have to put my pride aside,” Biles said to reporters.  “I have to do what’s right for me and focus on my mental health and not jeopardize my health and well-being. That’s why I decided to take a step back.”