If you want to learn how to make a delicious Fall cake click the video and follow along! 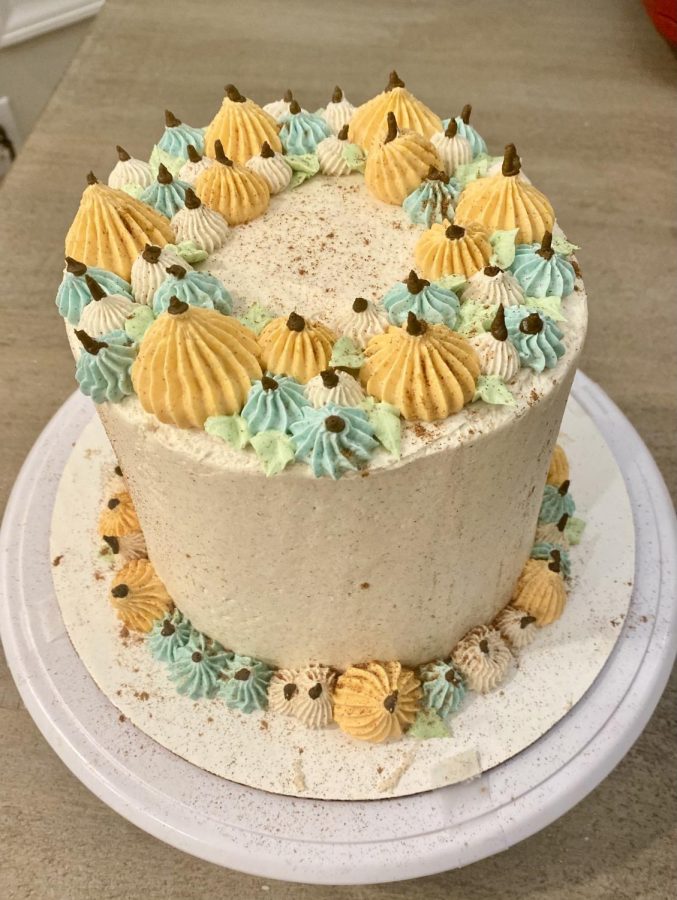 Watch the video to learn how to transform Sugar & Sparrow’s Pumpkin Chai Cake and The Busy Baker’s Chai Frosting into a true show-stopper.
Pumpkin Cake

Preheat the oven to 350ºF and prepare three 6-inch or two 9-inch cake pans by spraying the sides with cooking spray and placing a wax or parchment paper circle into the bottom of each one. Measure the cake flour by spooning into your measuring cup and leveling it. Place it into a medium sized bowl and add the baking powder, baking soda, salt, ground cinnamon, allspice, nutmeg, and ground ginger. Whisk together and set aside.

In the bowl of your stand mixer (a handheld mixer works fine too!), cream the butter on high for two minutes until it’s light and fluffy. Add in white and brown sugars and continue to mix on high for another two minutes, scraping down the bowl and paddle as needed. Add the eggs one at a time, mixing thoroughly after each addition. Add pumpkin puree and vanilla and mix for one minute on medium-high, scraping down the bowl and paddle once more.

With the mixer on low speed, add in the dry ingredients and mix until just combined. Add the buttermilk in a steady stream and mix until just incorporated. Scrape down the sides and bottom of the bowl and give it a few stirs to make sure there are no lumps. Batter will be slightly thick, but pourable.

Pour batter evenly between the cake pans (fill them no more than ⅔ full) and bake for 35-40 minutes, until a toothpick inserted comes out clean. Cool the cakes in the pan for ten minutes before removing and continuing to cool on a wire rack or flat surface.

Whip the butter on high speed in your stand mixer or in a bowl using your hand mixer.
Add the powdered sugar one cup at a time (add the cinnamon with the first addition), mixing after each addition.
Add the heavy cream one tablespoon at a time and whip the frosting on medium-high speed for several minutes until it’s light and fluffy.
Delete Image
Align Left
Align Center
Align Right
Align Left
Align Center
Delete Heading