Marvel Phase 4: The beginning of the future for the MCU 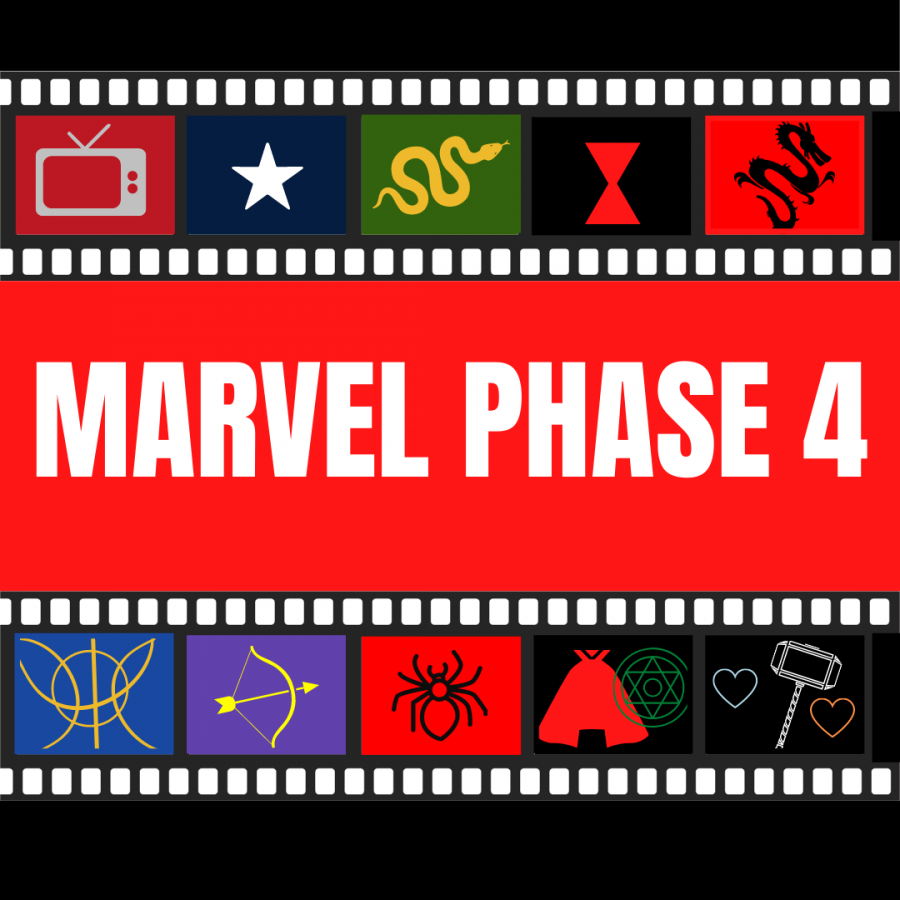 The long awaited movies for phase 4 are closer than ever.

Spoiler alert for some of the Marvel movies and the new Venom movie. Read with caution.

Marvel Phase Three ended on a heart-wrenching movie of Peter Parker losing yet another father figure. Then, on Jan. 15, 2021, WandaVision kicked off Phase Four with the creation of the anti-hero Scarlet Witch, the ongoing theme of reality and time breaking and the concept of grief and trauma. Next came The Falcon and the Winter Soldier which brought in another anti-hero, showed the growth of Bucky Barnes and gave us our new Captain America. However, everything changed when Loki showed up.

Loki was a confusing mess of the Time Variance Authority, his variants and his relationship with a female version of himself. Despite how some people feel about their relationship, Sylvie helped Loki grow as a character by inadvertently showing him how to help other people and teaching him about love. She then promptly stabbed him in the back. Most importantly, Loki broke the walls separating each universe — accidentally this time.

Hawkeye’s solo show is streaming on Disney+ with the first two episodes airing on Nov. 24, 2021. The show features Clint Barton reconnecting with his family who is back after the “blip.” However, his Christmas vacation is disrupted by both the criminals he terrorized during the five years before Endgame and Yelena Belova who is just trying to get misplaced revenge for her sister, Natasha Romanoff, aka Black Widow. Kate Bishop, the new Hawkeye for the Young Avengers, teams up with him in the Hallmark Christmas movie-like show.

We see more of the multiverse in the animated show What If…? which is getting a season two sometime in 2022. The consequences of Loki’s mistake are shown in the end credit scene of Venom: Let There Be Carnage, officially bringing Tom Hardy into the MCU. All of these multiverse moments are stepping stones to Spiderman: No Way Home coming out on Dec. 16, 2021 and Doctor Strange in the Multiverse of Madness coming out May 6, 2022.

Spiderman: No Way Home deals with the aftermath of Far From Home, in which Mysterio tells the whole world Spiderman’s identity. Peter goes to Doctor Strange for help and together they disrupt reality and merge all the past Spidermen — hello Andrew Garfield and Tobey Maguire — into one universe, including their villains. Willem Dafoe is rumored to be coming back as Green Goblin, but it is confirmed Alfred Molina who played Doc Ock in Spiderman 2 is reprising his role in the anticipated film. Sadly, Wong will not be in this movie, but I have a feeling he’s out partying/saving a part of the world with Shang-Chi and Katy.

Truth be told, we don’t know too much about Multiverse of Madness, except for the fact Elizabeth Olsen, who plays Wanda Maximoff, is starring alongside Benedict Cumberbatch as Doctor Strange’s antagonist. That’s about the same for the rest of the up-and-coming movies as well, such as Thor: Love and Thunder, so we can only have theories as to what the plotlines will be.

Eternals frankly did not deserve the low ratings that critics gave it. The film has the found family trope and is one of the most diverse MCU movies. For example, Lauren Ridloff plays the first deaf superhero and Brian Tyree Henry plays the first openly gay superhero in the Marvel universe. As for the end credit scenes, I can’t wait to see what is in store for the new Eternal, Eros and the new hero Black Knight.

Marvel has strong films and shows coming up, welcoming more anti-heroes, villains, heroes and some well-deserved closure to our bruised hearts. They’ve got even more shows, such as I Am Groot and Echo with unconfirmed release dates, and I imagine even more shows they aren’t telling us about. The timeline for dates and titles we do know, however, is down below.

What movies or shows are you most excited about?