Wakefield varsity basketball, ready to take it all 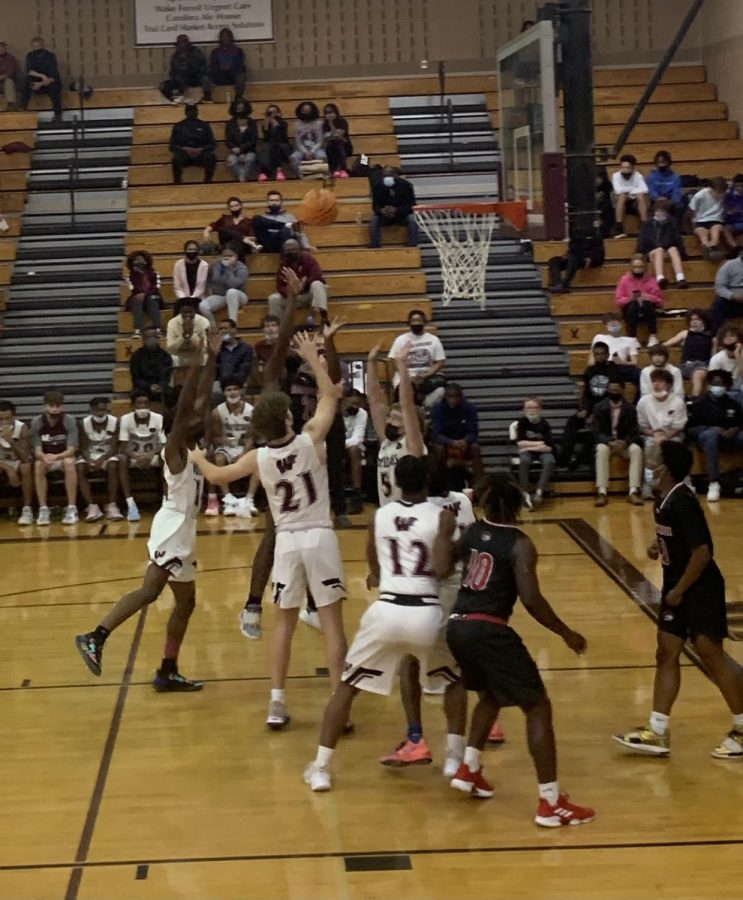 Practicing six days out of the week, the Wakefield high school varsity basketball team is ready for anything. Throughout the summer, the team practiced with multiple camps.  Some of the camps included were practices with Catawba college team, Northern Guilford High school jamboree, NCHSAA live period, and many more. Garrett Stevens, a basketball coach of six years talks about why he is excited for this year.

“We went to some camps and they played extremely well,” said Coach Stevens.  “The excitement about getting back on the floor is what I’m most excited about.”

The coaches are excited to say that this team has almost all returning varsity players with 12 out of the 13 students returning players from last year. Trent Wilson, a coach for the past 15 years, thinks having a returning varsity team will be important to the success this year.

“I have been here for 15 years and this is probably the deepest and one of the best teams I have been a part of,” said Coach Wilson. “It’s going to be pretty exciting.”

With Covid-19 affecting the sport last year, basketball had a very short season. Some students didn’t join with the fright of being exposed to Covid-19. The team also had to wear masks during practices and games which made many students uninterested in playing. Last year the team’s record was 7 and 4, which wasn’t that bad including how much of a difficult season it was. The team made it to the state playoffs but weren’t able to go because one of the players got Covid.

When you work six out of the seven days it might be hard to get your schoolwork done or have any social life. When it comes to our players, they don’t mind practicing something they love. Out of all of the amazing players, Jalen Yancey spoke out about practicing almost every day.

Having a coach that treats the players right is important when it comes to having a team. Carson Cryer, a senior who has been an all-around star player, got an honorable mention last year.

“He has been a leader,” said Coach Wilson.

Cryer believes that his team is one of the best and works together very well.

“Everyone respects everyone and everyone is willing to work hard,” said Cryer.

Jaxon Brown is a senior who has been on the varsity team since sophomore year. He was honorable mention as a sophomore and all-conference as a junior.

However, injuries have been keeping some players from returning to the game just yet. Cameron Spencer, junior, will be out the entire season due to a torn muscle in his leg, Cryer just returned from recovering throughout the summer from a knee injury, and Zack Weed and Yancey have both been recovering from ankle injuries.

These students seem to be putting everything they got into this season. Ayden Gwynn, junior is proud and super excited to see what this new journey will bring.

“Each day we come into the practice to outwork ourselves from the previous day,” said Gwynn. “We put in the effort each day because we’re here to win it all.”