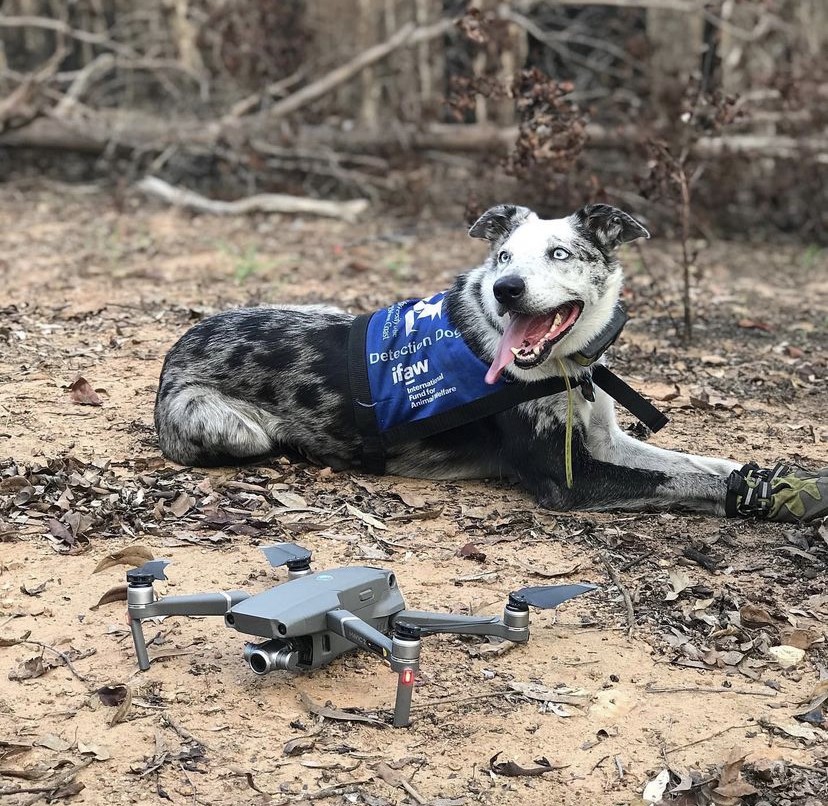 Bear poses for the camera while working in the field. He wears an identification vest and boots to protect him from the terrain.

When the wildfires make a burning comeback in Australia, the concern for the wildlife grows. The worry is especially high for a certain slow-moving marsupial. But with the help of the University of the Sunshine Coast (USC), these koalas are given new hope.

An Australian Koolie dog named Bear has been specially trained to sniff out the koalas in areas of concern in terms of the fires. Bear has learned how to track down koalas based on the scent of their fur and/or their feces. After he has located a stray koala, he lays beneath the stranded animal and protects its tree until help comes along.

Six-year-old Bear was trained to sniff out these mammals at a detection dog program at the USC. Bear is said to have an extremely skilled nose, and he also has a great attitude for the work he does.

The International Fund for Animal Welfare (IFAW) and USC Australia have many trained professionals to treat and study the koalas that are affected by the fires. After they are deemed healthy and fit for the wild, they are placed back into a safe and sustainable area, where they continue to thrive through rehabilitation strategies.

Those who are not ready to be released stay at Two Thumbs Wildlife Sanctuary, a rehabilitation facility for koalas who need to stay a longer time.

From 2019 to 2020, Bear is credited with saving over 100 koalas. Bear is the only dog in the world that is trained in saving these animals. Bear has won multiple awards for his work and bravery, such as Animal of the Year from the National Health Service and a medal from the International Fund for Animal Welfare.

Bear has also gained over 8,000 followers on his Instagram page bearthekoaladog and has a support website where you can learn more about his and his team’s remarkable journey.