The rising importance of LGBT representation in film, literature 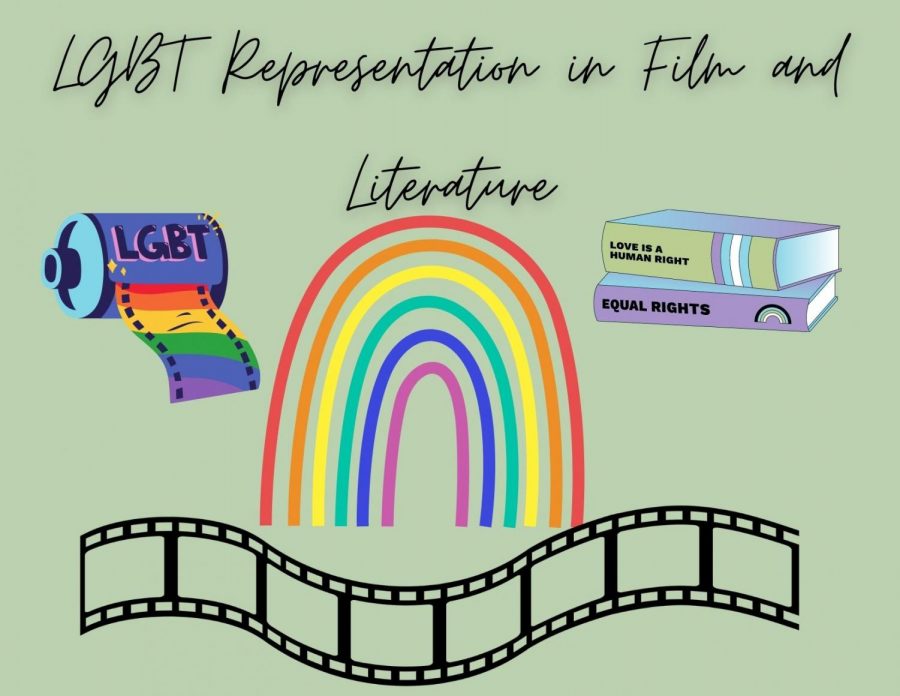 Since the first open presentation of queer characters in The Dickson Experimental Sound Film, along with the series, The Gay Brothers in 1895, queer representation in the media has come a long way.

Librarian Joyce Deaton believes in the importance of literature as a way to broaden perspectives. Students may use the literature in a media center to see themselves or learn about others thus gaining empathy.  However, some content may not be developmentally appropriate for an individual student and discretion is advised.

“In some cases, a reader may stumble into a topic they’re not ready for in terms of their maturity,” Deaton said. “Our general response would be to suggest they return the book and simply find another more suitable book.”

The new announcement of DC Comics character Jon Kent, son of Clark Kent, being openly bisexual in a new storyline has brought some mixed reactions. While many are excited to have more diversity in mainstream characters’ sexual orientations, some claim that this development will ruin the character. Many also believe that since superheroes are characters typically aimed at younger audiences, it’s not right to expose children to these topics.

DC Comics expresses the importance of queer-identifying children having main characters to relate with, not just supporting or background figures. They also explain the added importance of those characters being positively represented.

When it comes to leisure reading, the possibilities are endless. There is always a book out there when you know what you like to read. Books can provide emotional connections that create feelings of security and sureness.

“Some people feel that the library and reading books can provide a kind of empowering therapy, knowing you are not alone in an experience and especially providing yourself with perspective,” Deaton said. “By expanding the literature, not only does it help individuals, but also families come to understand more about what their own children may be going through.”

Deaton also shares information on Wakefield High Schools’ new collection of LGBT fiction titles in their library as a way for anyone to gain more understanding about the topics.

While many are open to the integration of LGBT inclusive novels in school libraries, there are many others that voice their concerns. In June of 2021, North Carolina Lieutenant Governor Mark Robinson went public with his concerns and criticism about the presence of reading material mentioning LGBT characters.

“There’s no reason anybody anywhere in America should be telling any child about transgenderism, homosexuality, any of that filth,” Robinson said in a news conference when asked about his opinions on LGBT books in school libraries.

Robinson is being called out by democratic and LGBT support groups, some even calling for his resignation.

The Trevor Project, a support group for LGBT teens struggling with mental health and personal situations estimates that every 45 seconds, there is an LGBT youth between the ages of 13-24 that commits suicide. These numbers are boosted when adults and higher figures in young people’s lives do not share unconditional love and support with them.

“Being able to see someone in a movie or a book representing what they feel is really important,” said Fisher. “It helps them to understand that itś not wrong, that it is ok, and that they are not alone.”

Lack of representation can create feelings of being out of place or shame, which negatively affects those individuals.

Multiple schools across the country have created Pride Clubs and/or Gay-Straight Alliances aiming to bring together students of all identities, to show support, and to work together to normalize representation.

Wakefield High School is home to both of these clubs. Joshua Cyr, leader of Pride Club, voices their opinion on this topic:

“I think we’re going to see a big shift with this next generation of children coming up that grew up on shows like Stephen Universe and [storylines] that show characters with a variety of gender identities, backgrounds, and orientations,” Cyr said. “ I think it’s going to be interesting to see how people being raised now want to portray LGBTQ issues.”

Many producers and authors are working to figure out ways to diversify their characters and broaden their storylines to make way for more characters with varying backgrounds and qualities.

In an interview with junior, Ava Bonner, discussions about the benefits of positive portrayal were highly emphasized, and the long-term impact that can have on these struggling individuals.

“It’s liberating to see any sort of representation on various platforms, especially those as widespread as the media,” Bonner said. “It opens up a safe space for all minorities alike, and you’re able to connect through just that one powerful characteristic. Knowing you are not alone in your identity makes you feel a lot more seen in a society that is known for belittling minorities for immutable characteristics.”