Wakefield volleyball team strives to be better than ever 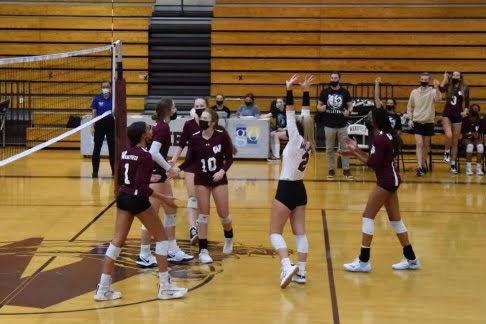 Kyle Bayer, one of the school’s social studies teachers, takes on the role of the new volleyball coach. the season with a new coach can always be a struggle, but the volleyball team has found ways to create a healthy and fun environment. The team has grown and become stronger because of all of the teamwork they have shown.

“It’s a bit of a learning curve,” said Bayer. “Once you get used to it, the ball starts rolling and it gets easier as it goes.”

Last year, they started the season without a non-conference play which led to them finishing the year with four – seven records — however, this was because they only had 11 total games. This year the team is starting out strong with a seven-five win rate and six games left.

Throughout the season they have had to learn how to work together and deal with ups and downs, but they are slowly finding ways to create plays and drop the ball less.

“There are small things that I would like to try differently — some things sound good on paper, and then, it doesn’t go as you expect,” Bayer said. “It’s a bit of trial and error with trying out different things.”

Some difficulties that the team has had to deal with include concussions; Lily Slaymaker and Emma Piburn have both had to deal with these tragedies that have made them miss out on playing games.

“It was hard to miss so much of the season and it was hard to accept that I was going to be out for a while,” said Slaymaker.“But I was happy that I could come to some of the games and give my support.”

Simone Barlow, junior who was voted team captain, is so excited to see that this season is progressing.

“From last year to now, the attitude is a lot better and everyone loves to work hard,” said Barlow. “So we all work hard and are excited to play,”

Hannah Schuh, Senior caption, is exhilarated to be a part of a team that is beginning to get into a groove with teammates that care. The following year the team had difficulties with being in a routine with Covid 19.

“We get excited for each other, and are learning to be more disciplined than last year,” said Schuh.

Together the team will keep on growing and Wakefield is excited to see what the rest of the season has to offer.

“I think we are doing really well everyone is enjoying the coaching staff,” said Barlow.