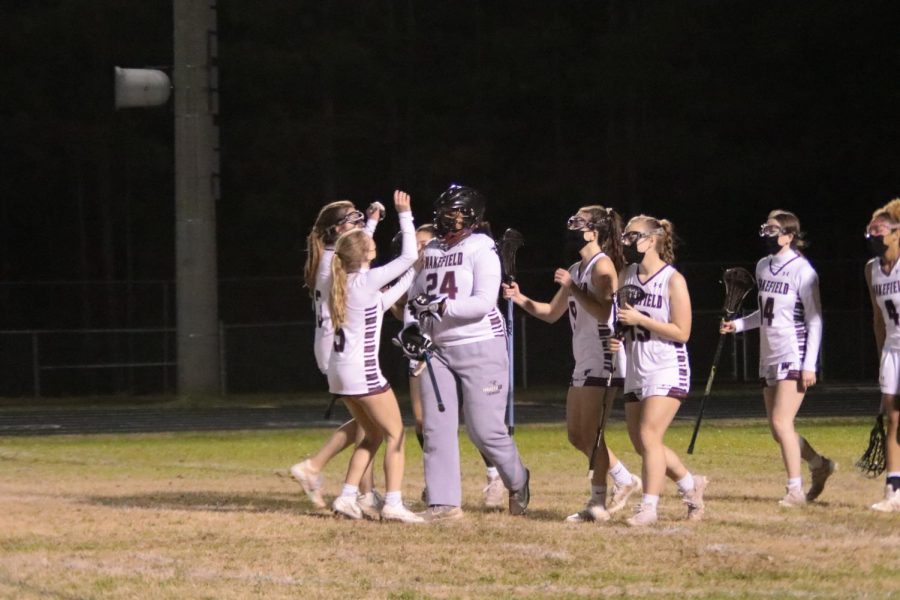 As the year comes to an end, Wakefield athletes begin to hang up the cleats for the season. The women’s lacrosse team is no exception.

In a year plagued with setbacks and restrictions, the women’s lacrosse team persevered through some tough new rules put in place due to the pandemic.

“Since lacrosse is so running intensive, the mask protocol was very taxing on my girls,” said Evan Murphy, the head coach of the women’s lacrosse team. “We also weren’t allowed to have spectators at our away games… [so] I really empathize with the senior parents on our team who got to attend less than half of their daughter’s final season.”

Despite a losing record of 5-7, the team showed lots of promise for growth in future years.

“I think our team played pretty well under this season’s circumstances,” said sophomore Allie Caulway. “We have a fairly young team and we will only get better from here.”

Though they are young, the women’s lacrosse team is losing 5 seniors at the end of this season: Ava McLary, Maddie Caulway, Megan Kephart, Brooke Donley and Trinity King.

“My senior lacrosse season was one to remember,” said senior captain Megan Kephart. “With COVID-19 taking away most of our season, I wasn’t sure how it was going to go.”

Despite a two-week quarantine period due to an exposure on the team, the team remained optimistic in the face of adversity. Though the season had its ups and downs, one thing is sure: the Wakefield women’s lacrosse team persisted through setback after setback to prove themselves on the field this season. There’s no telling how far they’ll go in years to come.

“I will say, given all the challenges, there were hardly any complaints,” said Murphy. “Everyone seemed really grateful to be out of their house surrounded by friends.”